Is anyone growing veggies?

Have a big pot of seeded tomatoes simmering on the stove. Trying to work up the energy to pick and add basil, oregano, onions, peppers, a red beetle for color and sweetness, and maybe an okra or two for thickening. Cook all day and freeze for winter goodness.

Forgot the garlic…must have garlic!

I’ve been told growing garlic is super easy, is yours homegrown?

Yes. I plant in October (we are in Connecticut) and harvest when the tops are about half dry. And eat all winter. We grow a hard neck variety that I’ve been replanting for years. It has delicious scapes in early summer. Scapes are the flowering part. Pick and roast in the oven for a yummy treat. I think it’s time to buy new this year, the cloves are small or it might be our wonky weather.

It’s a bit labor intensive, but homemade spaghetti sauce is amazing. Take a large pot and add
Lots of tomatoes, seeded. We leave the skins on and just blend them in at a later stage
Lots of basil, oregano, garlic, onion, peppers
Salt and pepper
Olive oil

Start a large pot of the tomatoes. We froze the early tomatoes we couldn’t eat until we had enough for a batch. Tip: Seed them, then freeze.
Take your time. We add ingredients throughout the day and simmer all day to reduce the liquid. We might add a red beet and their greens, an okra or two (remove the fibrous parts later), maybe that extra summer squash or zuchini. …it’s very forgiving.
Use your blender to grind up everything after it has cooked a while and then continue to cook and reduce until thicker.
It freezes beautifully, makes great pizza sauce, even food as a base for chili with some canned tomatoes. And so on.

I ordered garlic to plant back in April. It arrives in September. Love growing garlic!

I have never grown garlic before… I think I may need to jump on that bandwagon this year though.

It’s super easy. My suggestion is to buy commercial ‘seed’, which basically arrives as heads of garlic. I have tried growing grocery store garlic which has always been a disappointment. Anyone who is thinking about growing it this fall should consider ordering it soon. It should ship when it’s ready to be planted. It’s the only thing I have ever found that consistently sells out right when you remember you should have ordered some.

Thanks! I just ordered garlic and chervil.

This was my sunflower an hour or so ago: 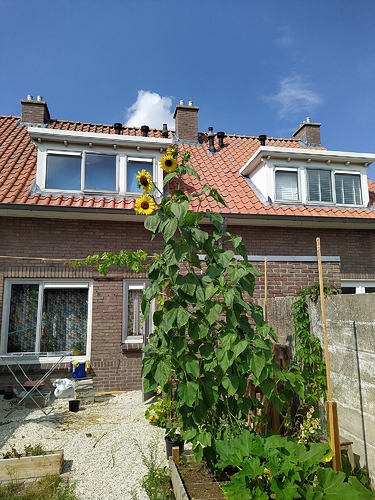 Yeah, supermarket garlic and potatoes are treated to not sprout. It’s a shame.

Okay, garlic question then… soft neck or hard neck? I’ve never grown either and don’t know what the benefits or downfalls are of either.

I ordered softneck, honestly just because the seed store recommended this variety (Flavor). This variety can be stored for a long time, which was important to me because I eat alone most days. I don’t go through a lot of garlic. 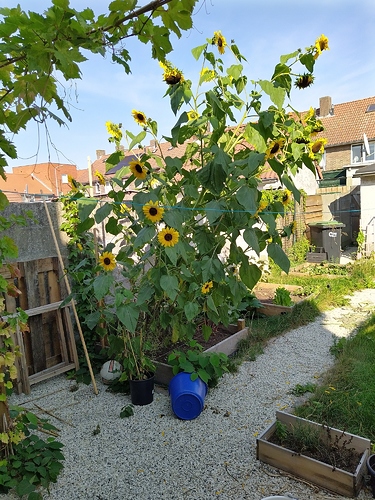 I’m sowing for the last time today - spinach, kale and endive. The weather is still quite soft for autumn, so I’m still getting a ton of courgettes.

That sunflower is gorgeous!

I love that sunflower, and you inspired me to order some seeds so I can plant some next year. I did a trial frun of my tower planter (a GreenStalk) and while my tomatoes and peppers didn’t make it (newbie gardener), I did get a mini harvest of bush beans (they were delicious). I do think I ended up with spider mites, so I need to figure out what to do about that. I don’t want to throw out all of the soil in the planter tiers! 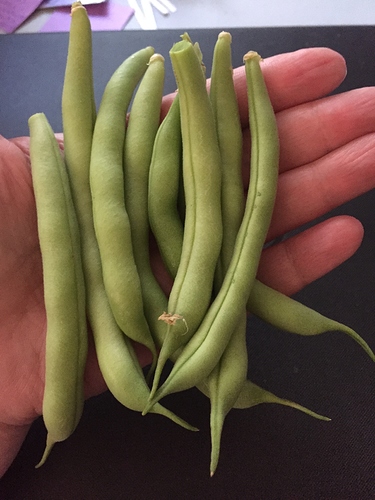 Your mini harvest is gorgeous

It’s a shame but it’s if I wait until it falls over it’s going to damage other plants. 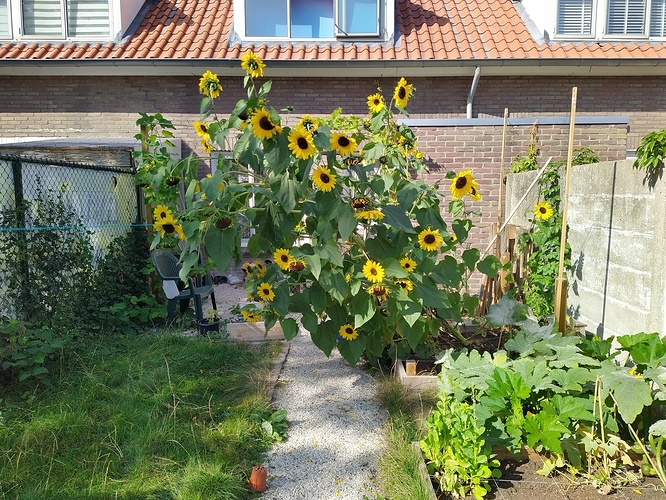 It will make a gorgeous giant vase of flowers