This is my Jerusalem painting painted almost entirely with jelly beans. I say “almost” because I did use one other ingredient - licorice!! I used black licorice as my outline to create the stain glass effect depicted in the painting. I had posted that first jelly bean “test piece” that I did, here, but decided to allow my Jerusalem to have its own spotlight as it was quite an extensive bit of work - measuring 8ft across - and one that took a lot of research and prep time before I could even begin it…not to mention the many, many finger burns (times ten) that were impossible to avoid, that it took to complete it! Needless to say, each jelly bean is hot glued, then placed in position, one at a time!! Just look at all that fun my hot glue gun had…with my fingers!!!

I wanted to do a painting of Jerusalem that had not been done by another artist. Research!! I finally hit upon this old picture of Jerusalem after it had suffered an attack. 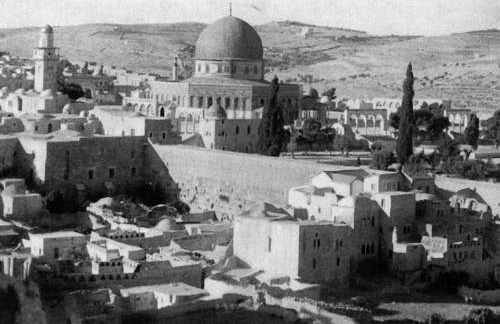 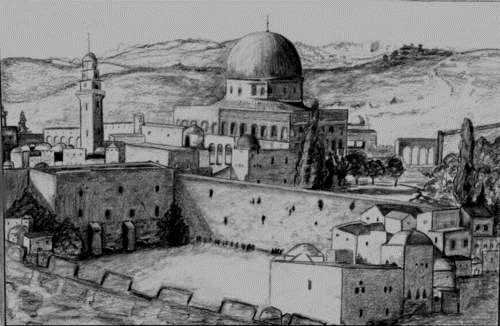 next …painted to replicate stain glass 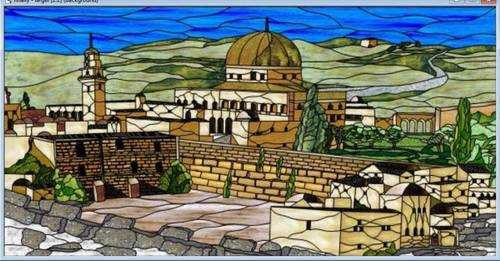 note: later I would change the color of the sky which I realized was too dark, and that, after I had already hot glued on a whole bunch of it, too!! Had to chisel it all off, which wasn’t easy and which also proved to me how durable paintings done using hot glue to glue the jelly beans on is certainly “durable!!”

Now to begin - sketched again on board: 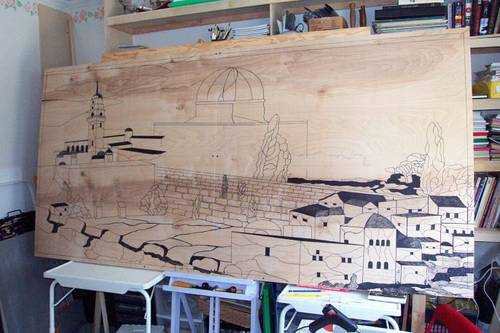 Started with a bit of sky: 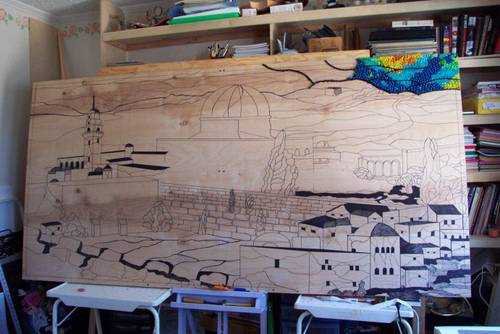 Thinking what colors to use on the houses? Not a lot of colors in jelly beans to choose from.Testing!!! 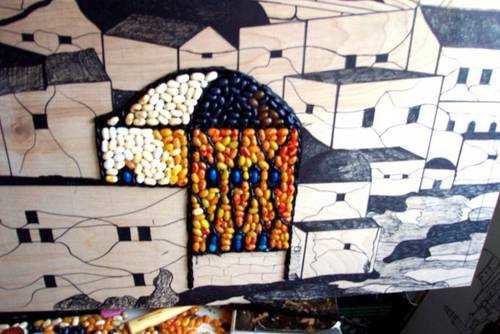 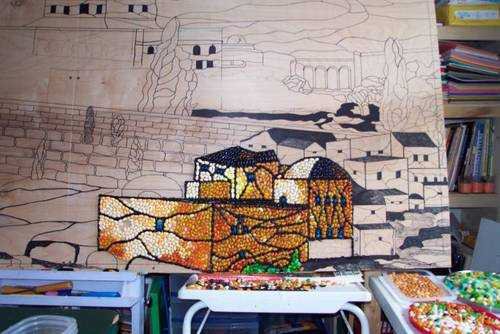 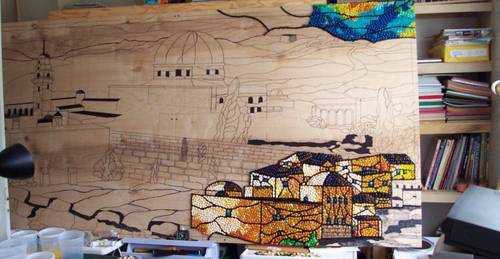 now for some greenery 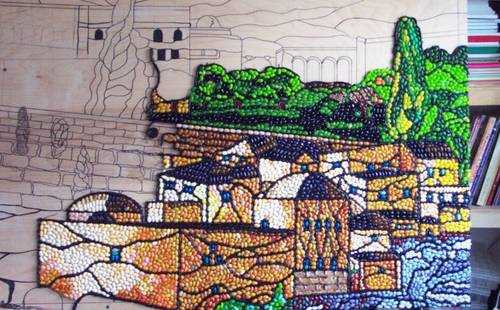 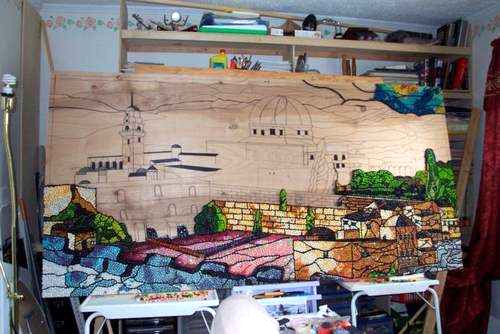 put in the steeple 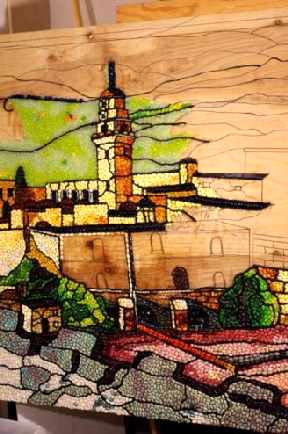 …why am I still putting in that awful blue sky??? 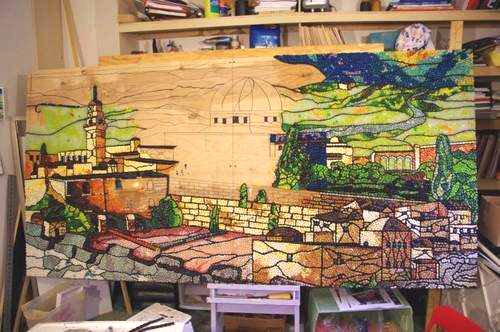 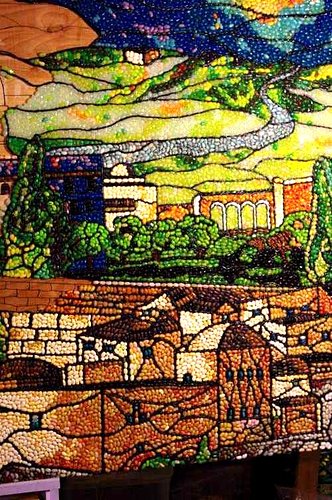 oh nooooo! Gotta get fix this!!! Some areas are off, too dark!! Where’s my chisel? Arrrgh! 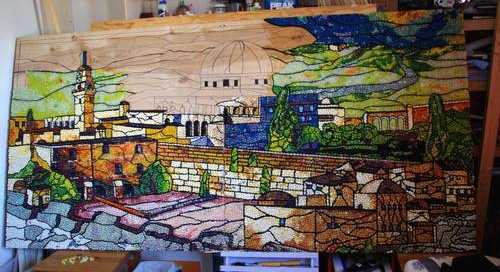 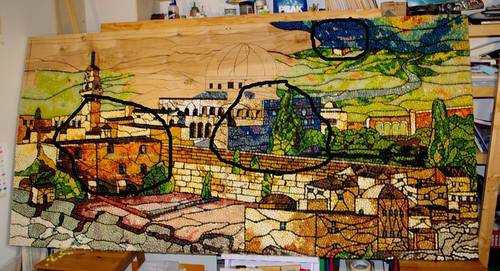 well, it had to be done! 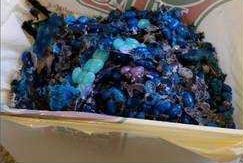 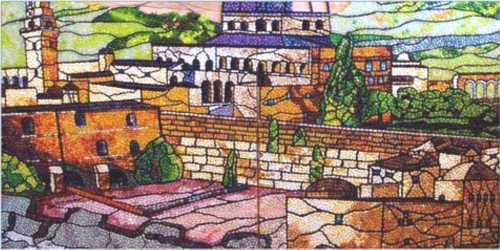 note:
Forgot to explain about that line you see running thru the middle of the jelly bean painting. That’s a cut line (or joining line) where I had to saw the painting in half! That’s right!! I had to SAW the painting in half. Why? Because otherwise I would not be able to get the piece out of my workroom because the hallway was too narrow. I will re-seam that area once I get it to where it had to go. I did re-seam it at the Y, later. They put up a curtain that I worked behind, so members couldn’t see the painting till the Y was ready to present it to them.

Finished!! Or is it? That sky is killing me! My friends liked it…but… 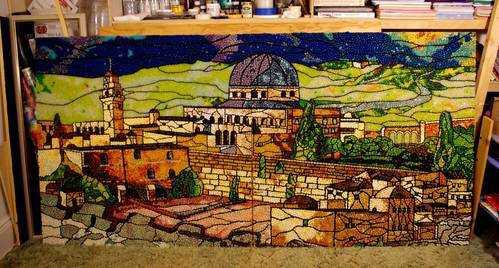 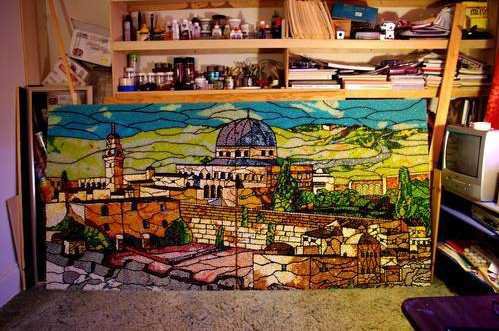 …seam all sewed up! 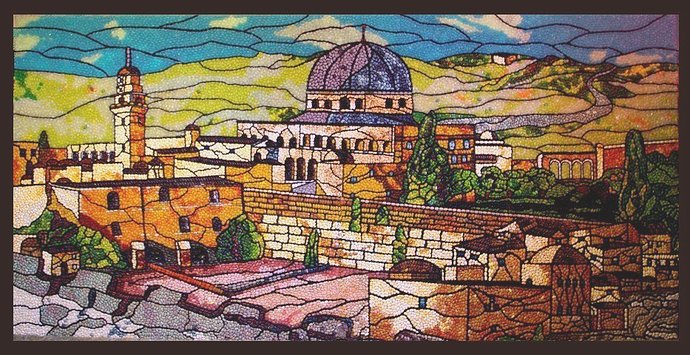 This jelly bean painting is installed at the JCC (Jewish Community Center) on Menetto Hill Rd in
Plainview, NY.

Another absolutely amazing work of art from you

This is just incredible…loved reading about your process as well…and the amount of time and effort you put in (chiseling!)…also, to be able to see the colors using jellybeans as your paint palette…amazing…thanks for sharing…

I had jellybeans EVERYwhere in my workroom; 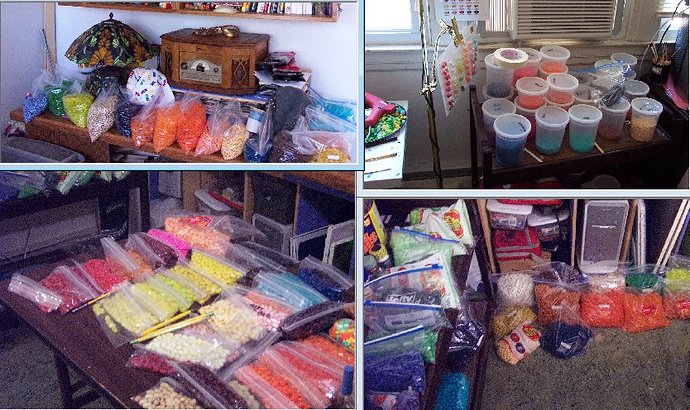 …and if you look over to the right-hand side of this next picture in the tray there on the right, you will see that there are jellybeans there that are loose and not in bags. I would leave them like that till the end of the painting, maybe swapping out different colors from time to time as per certain work areas, but nevertheless I’d leave them there uncovered and as is and never found a bug, a fly or gnat, or any kind of insect, including ants, on them the next morning!! Ya gotta love polyurethane!!! 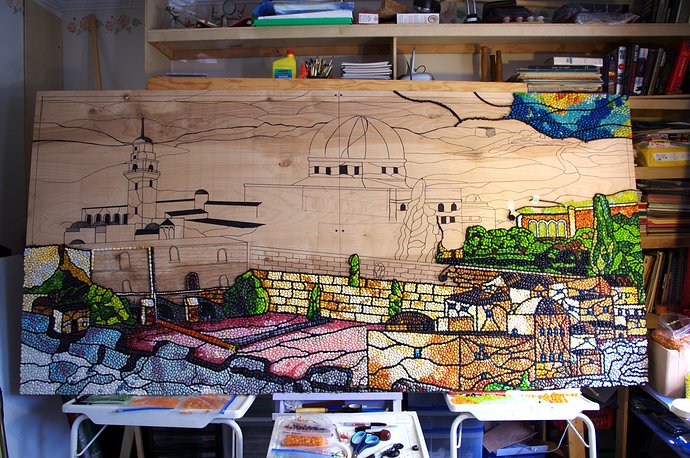 This is amazing! Did you lose any desire to ever eat jelly beans again after this?

Ahhhh hon… I could eat jelly bellies til I mummify!! I used to put one on the board…and two in my mouth!!!

This is amazing! I didn’t realize that jelly bean artists even existed, so thanks for bringing this unique art form to my attention! I can’t believe you scraped off some of your work, but the finished piece is totally worth the extra effort.

How did you seam it back together? Did you have to remove the cut jelly beans and fill them back in?

And, did you apply the polyurethane before you glued the beans in place, or after?

This is absolutely incredible! The amount of detail is stunning, and I love the stained glass effect. If it makes you feel better about all the chiseling, I think you made the right choice to do a lighter-colored sky, it really makes the buildings pop. Fantastic work!

Just an idea for you to consider, this is a wonderful project to try. If your piece is worth the attention of the jelly bean company, they will supply all the jelly bellies you need for your project. I got all my jelly bellies, free!!! All I know is the Y called the jelly belly company (I didn’t) and told them about the project I was doing for the Y, next thing I know I got a call from the company asking me what colors did I need? Boxes of the stuff arrived within a week. They sent me thousands of dollars worth of them. They ARE expensive per pound, you know!!!l It is after all free advertisement for their candies. If you wanna do something like this for, say a school, a religious org. or even just for them, I am sure they will back you…that is if your idea is worth their attention - not to mention all the jelly bellies you can eat!! Go on YouTube and check out what other jelly bean artists do regarding HOW to make a jelly bean painting.

Some artists PAINT the whole painting on a thin piece of plywood, then use a kind of tacky glue that they smear over the painting they did, then they start laying on their jelly bellies right over the picture they had painted on the ply. When finished, they cover all with urethane. I use polyurethane and apply with a 3in brush. I let the painting sit a day or two, checking now and then to see if dry. When “dry” I apply another coat. And I was very liberal as to how much urethane I put on. I am here to help!

Note: I had to throw out boxes of jelly bellies when I moved here…no room!!! So it’s no more jelly bean paintings for me! Again…no room!!

This is absolutely incredible!!! It’s soooo gorgeous, even without taking into account the fact that it’s made of jelly beans! So whimsical and wonderful!

Wow! This is a work of art you should be proud of creating. It’s amazing. Thank you for sharing so many photos of your progress with us!

Everything you do is spectacular, and this is no exception! Wow, jelly beans? That’s such a cool idea!

This is amazing!!! There are so many different color combined!!! Wow!!!

I know this is such a well appreciated piece of art, enjoyed by all who visit the JCC. Really great job!