Leaders and enders for sewing, how and why

Our quiltalong has had a bit of discussion about leaders and enders, and I wanted to add some visuals. This is not an original ideas, I’m guessing it existed as long as sewing machines were invented. But Bonnie Hunter quiltville has written a book about it.

The problem that this solves

When starting a seam, especially little points like this, the machine will often eat the points and/or create a thread nest. 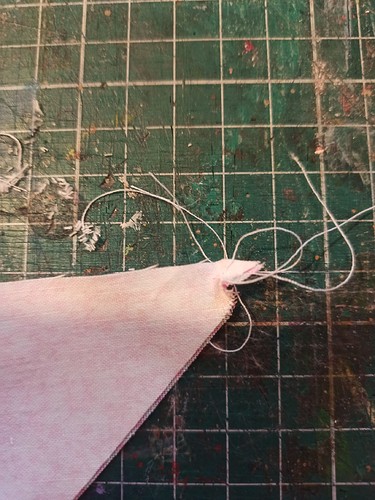 Cut lots of small squares(or any other shape!) From scrap, in general I try and do lights and darks. And have them within arm’s reach. 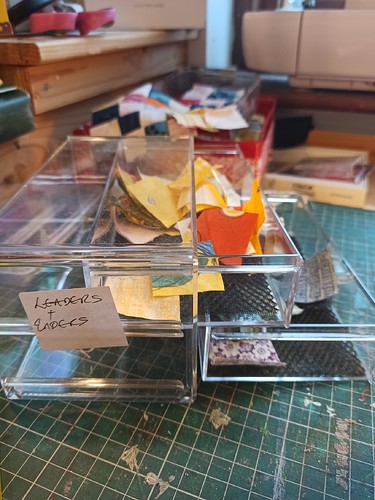 Put a light and dark together and sew them. Hold the threads back and to the left as you start to sew, keeping them taut. Sew this seam almost to the end. This is the leader, as it’s starting the chain. 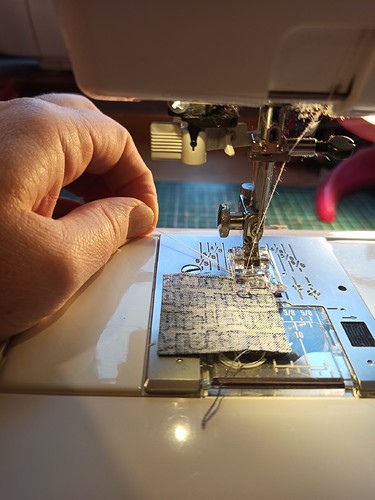 At the very end of that seam, line up the pieces you want to join. I’m joining a few triangles here. 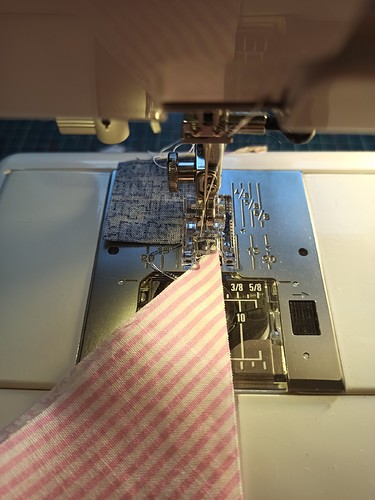 You might need to lift the presser foot slightly to get them positioned, don’t overlap the two sets, they just need to be adjacent, within a stitch or two.

Sew the seam, and again when you get to the very end, line up your next pieces this is chain piecing 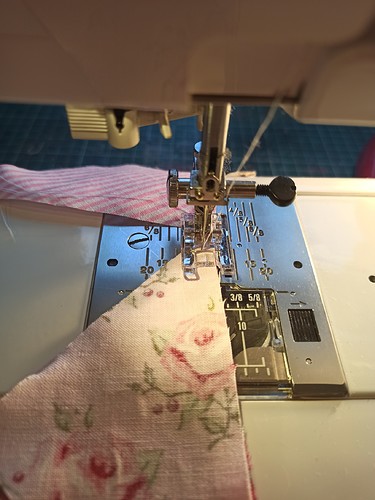 Keep going until you have all the pieces sewn. Stop just at the end of the last piece and grab two more of your small squares (because this is ending the chain, it’s called an ender-but it’s the exact same as the leader) line these up and sew, but stop before you get to the end. 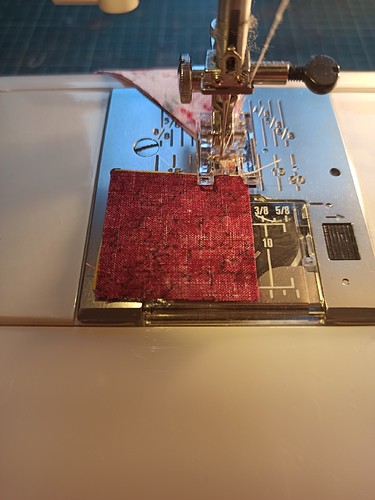 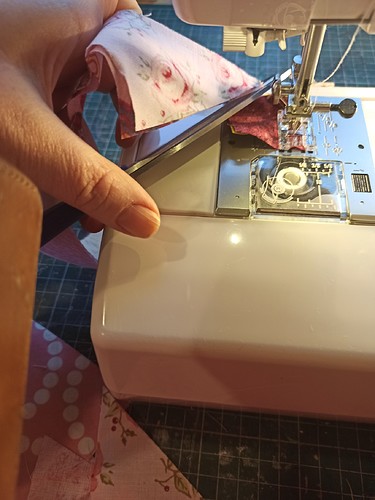 Now you have a chain of pieces, with a leader at the start, snip them apart 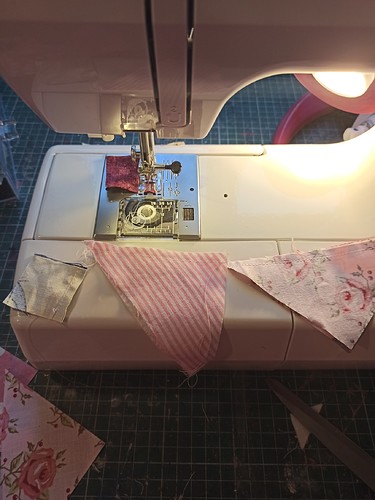 Press them open, I always press the leader along with the other pieces. 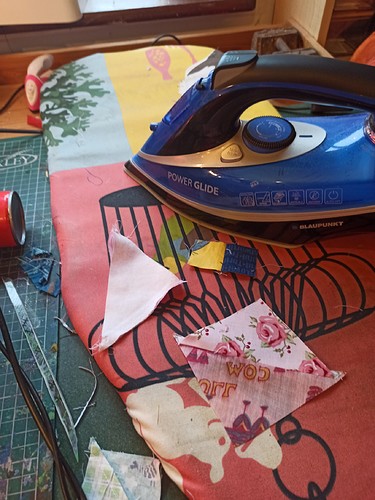 Add your leader, which is now just two little squares joined, to the growing pile. 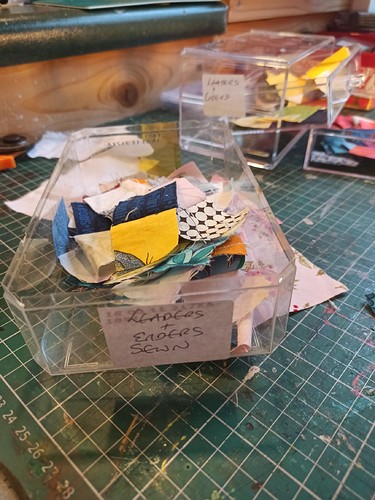 When you run out of squares that you have precut, you can join them together into strips and larger sets 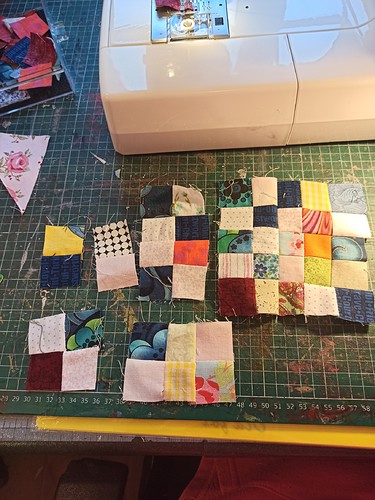 They can then be used, I used some in this wonky star, you can see that my seams were not regular in the leaders and enders, but it doesn’t really matter. 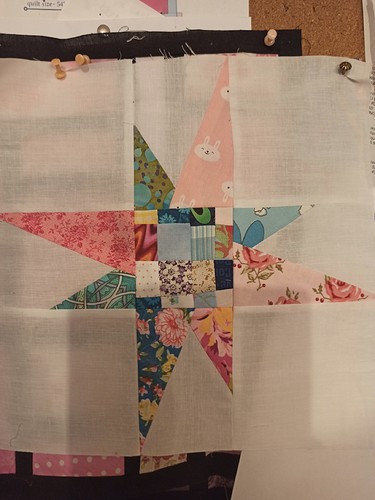 The ender that you have left in the machine, becomes the new leader.

-Few thread nests and eaten points.
-You use way way less thread when chain piecing
-Chain piecing is much faster than sewing and cutting off one seam at a time.
-you won’t have the machine pull the thread out of the needle if you cut it too short.
-Eventually if you create enough leaders and enders you could have a whole quilt made while you’re working on other projects (I think it’s more realistic to turn them into potholders, or pouches)

I followed Bonnie Hunters suggestion of cutting my leader and ender squares at 1.5" which means when all sewn together, they should be 1" so they will fit any block size. (They would make an awesome sashing strip) but you could use any size or shape leaders and enders. Small size charm packs would be great, because you’d get a secondary quilt really fast.

I must admit I hadn’t heard of them before when following along the quilting thread.

Thanks for the explanation. This is so helpful. I actually have a UFO quilt of little squares. Now I can work on it while doing other projects

Thank you for the visuals! I totally get it now. The chain makes me think of a little parade. Lol!

OHHHH! I get it now! Thank you so much for the photos & explanation. This is clever & totally doable. I’m in!

Ah-ha!! It makes so much more sense. Thanks for taking the time to put this together!!!

Oh, this helps so much! I sorta understood the BH link you’d posted, but this is much clearer! Thank you.

Makes a lot more sense to see it done…I couldn’t quite figure out how to make use of the leaders but as you pointed out, they are not meant to be perfect…or the same size…I think this will also help me solve my scrap problem…thanks for this tutorial…before starting my next quilt, I am going to cut out a bunch of light and dark squares!

Thanks for the explanation. I’ve been sewing since Moses was a pup

but didn’t know about leaders and enders. They’ll help with non-quilt production sewing, too.

Holy crap love this tip!!! Thank so much for sharing!

@steiconi they are good for any sewing really, I used to get so frustrated with the machine eating the start of a seam, until I learned this.

@AIMR nothing solves the scrap problem, I’ve just finished sewing my second scrap quilt of this year, plus some orphan blocks and I swear I still have the same amount of scraps.

@Magpie @Whistlefish @Lynx2Lancer @Abbeeroad
I’m really glad it helped. I was up early this morning (trying to force my body into a sleep routine) so I figured it would be a useful way to spend my time before breakfast.

I solved my scrap problem; my neighbor’s niece will take any scraps, no matter how small!

Thanks for the tut and the pics. I see YouTube quilters using this method, and I kinds/sorta understood but now I get it.

I need to start doing this, but force of habit has my hitting that cut button after every piece😆 I even have a cut foot pedal

I have used leaders and enders before, but just with a random scrap folded over. It had never occurred to me to be more intentional with them. I’ll have to get better at scrap management, for sure!

I had no idea this was a thing, so thank you!

I also have a cut button and a setting to make sure the needle is in the down position when I stop sewing…it would be a bit of an adjustment…not sure I would be able to use all of the scraps put together since I sew a lot of non-quilts…interesting anyway!

That was my trade off when buying my new machine, I decided to go for a fully mechanical one, for long term reparability, so none of the fancy schmancy computer controlled functions. And I really miss the needle up/down button and I would love a cut button!

My workhorse is my old Kenmore mechanical with straight and zig zag…I added a thread cutter to it since it had worn out…I love it more than my fancy one…slow and reliable!

This is awesome. Thank you for posting a visual of this technique.

The squares are a bit bigger, but using the pieces for my economy pillow-style quilt would be a great way to make some progress on that while churning out a few new quilts.