I made these! It took aaaaaaages! But I do love miniatures, even if I’m not a super pro like some of you. The blue tin is a raffle prize for the Nerd Games but the red one is for me! It took forrrrrever to make the little lemonade pitcher so I’m keeping it. 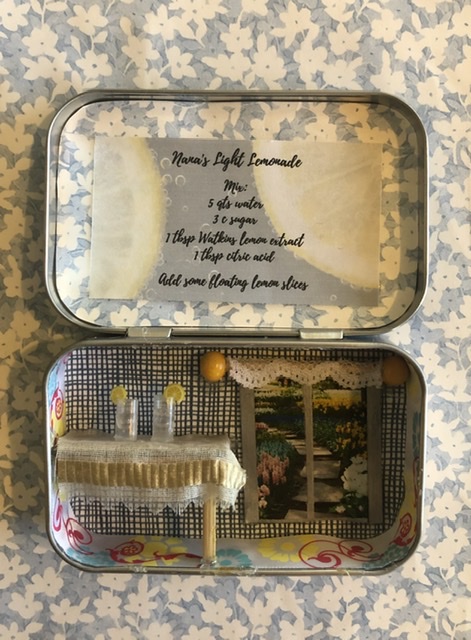 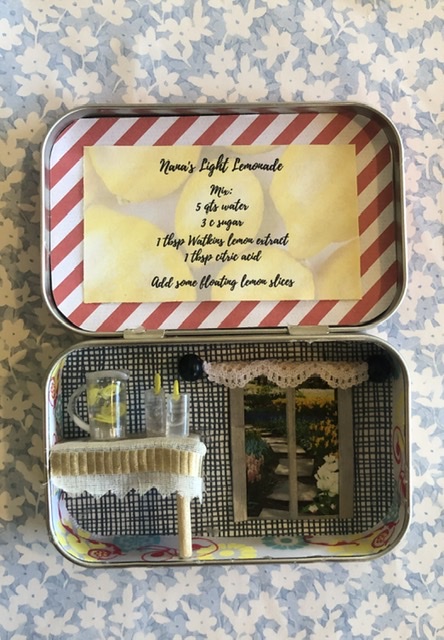 Oh, wow! These are totally amazing! How did you make the glasses and pitcher?

The pitcher was a pen cap, cut down and with the rounded tip sanded flat to form the base. I used a heat gun to soften the cut end and then used a metal clay sculpting tool to pull the spout from the softened plastic. The handle was a bit of the detritus left from cutting the cap down, again the heat gun was used to curve it. Then I superglued it onto the side. You definitely want to use long tweezers when holding something so tiny near a heat gun! It’s a miracle that I’m blister-free.

The glasses were part of a clear drinking straw cut to desired length. I put a little blob of hot glue on some waxed paper and set one end of the straw in it to form the bottom of the cup. When it was cool, I trimmed off the excess paper and glue.

I used E6000 to create the illusion of stuff in the jug and glasses. I had teeny polymer clay fruit slices that I bought online years ago. I cut minuscule slices in some of them to garnish the glasses, and used a toothpick to push a few down into the glue that was in the pitcher.

Love, love, love. And I’m so happy you posted your process and materials. Because I definitely wanted to know!

These are fabulous! Thanks for sharing your process!

Wow! That is insane. I love miniature but they are so much work. I bet the feeling of accomplishment is amazing though. It should be. These are adorable! So very Spring and fun. The pitcher looks amazing!

I love these, but I love reading about how you made them even more.

It is so cool to know how people use everyday things to make these miniatures! A drinking straw becomes glasses? I am amazed at this world of miniature stuff…

THESE ARE AMAZING! Your tiny lemonade glasses and pitcher as the bees knees! Thanks for sharing your construction methods.

You did a great job on these! I agree that the pitcher is pretty darn impressive and those lemon slices are so tiny and perfect for this!

This is absolutely adorable!

Congrats! Your lemonade tin is of this week’s featured projects.

Fantastic! What a clever way to make the pitcher!

Wow, I can’t believe you made that pitcher. It’s fabulous!

Thanks for explaining the process behind these! I love learning about your resourcefulness in coming up with materials for your tiny things!