A dear friend is expecting soon so I made a height chart in the woodland/Miyazaki theme of her kiddo’s room. The original idea was just a simple plant because she has a deep abiding love for plants of all sorts as well. 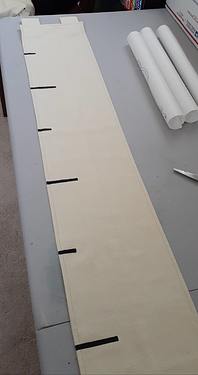 It’s been a long time since I’ve done freezer paper stenciling, and I’ve never done one this big. I had to cut the stencil in 3 sections and ironed it down in pieces.

I ran into problems when I attempted to stencil the numbers on. I didn’t think about the pen I used to draw on the shape and it ended up bleeding into the white fabric paint I was using

I went through trying a number of things to fix it or cover it up including adding more layers of white to cover it up, then trying a “light” gray when that didn’t work - light gray ended up too dark, and bled as well. I then tried to iron on a layer of white cotton with fusing which peeled off after some testing (I was worried about durability). Finally I decided to glue some felt on with E6000. Finally a solution I felt ok with. Up until I tried the felt, I was very close to binning the whole thing. 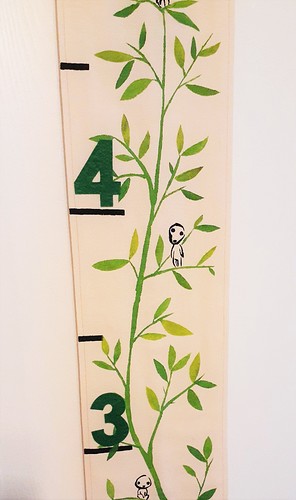 I was afraid that the green was either going to blend with the plant too much, or be too stark in contrast, but I was surprised that it works. Obviously. It took me way too long to give it a shot. Lesson learned.

What a cool thing!

Maybe I should make myself one to mark my aging shrinkitude; I’ve already lost 1-1/2".

Princess Mononoke fan, huh? it’s a really cute chart and I never would have guessed you had any trouble - it looks great!

Oh, it turned out great! I wouldn’t have suspected any trials or tribulations, either.

The green numbers worked really well with the design!

Thanks everyone. It was one of those projects that was fun until it wasn’t. But then it was fun again after my struggles and I’m happy with it in the end.

This is so sweet!!

It came out so awesome! Way to persevere…I think the dark green is perfect! You are the craft solution master for sure.

But where’s your little label?!

This is wonderful! Thoughtful, sweet, nerdy, and beautifully executed. I am sure it will be absolutely cherished! I also think the felt numbers worked out wonderfully.

This very pretty and I love the little Miyazaki guy almost hidden on there.

It came out so beautifully my friend!

So well executed. They will always remember having their height measured, gazing at the little beings.