My house is currently like a building site, progress is being made, but everything is under a layer of builders dust. Walls are being removed, new walls built-chaos reigns.

I have no craft room and most of my craft supplies and tools are boxed away in the attic. But when I was looking for something there the other day, I found this kit-all those early lock down nights buying random stuff on AliExpress has paid off!

So I made this, it doesn’t take a psychologist to make the link between building I can control and building I can’t! So this was particularly satisfying, apart from the usual super glue mishaps.

One of the things I’m learning about these kits is that sometimes it’s better to leave things out. The designers are awesome but they cram them full of stuff. I’ve left out a couple of pieces here (coffee grinder, Cheval mirror, hat) and I think it looks better, less full. I also swapped out the paper lampshade for this one-which is a bottle cap. I also laid it out differently and dressed the room slightly differently. They always add curtains which never hang right at this size, so I made a Roman blind instead. 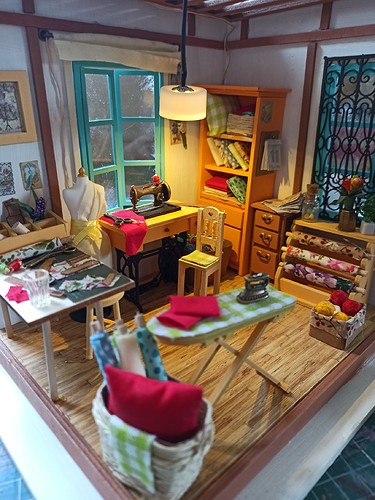 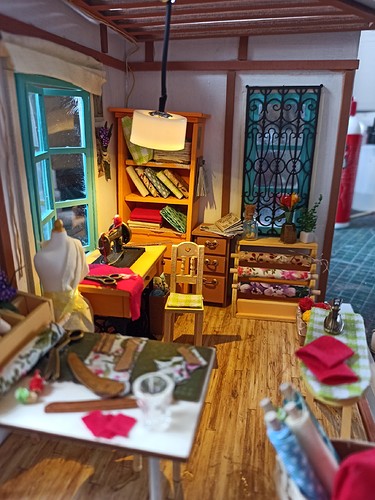 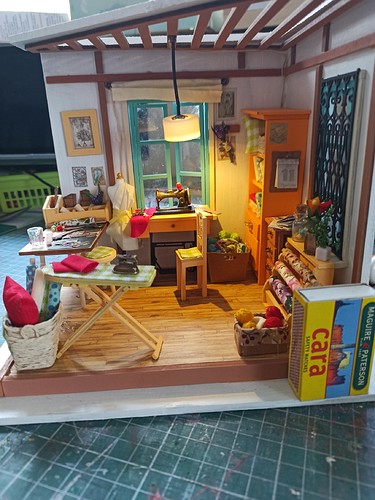 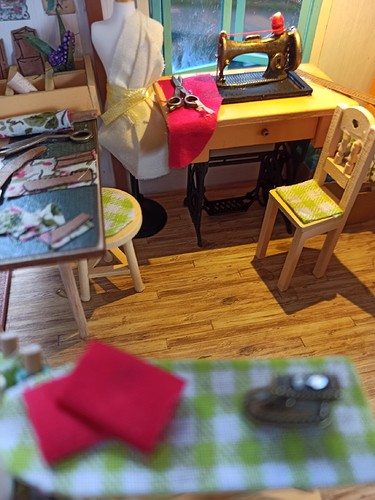 This is the original picture, with the kinda lame lampshade, and it’s a lot more cluttered(which tbh it’s probably a more accurate representation of what my sewing room was like at times 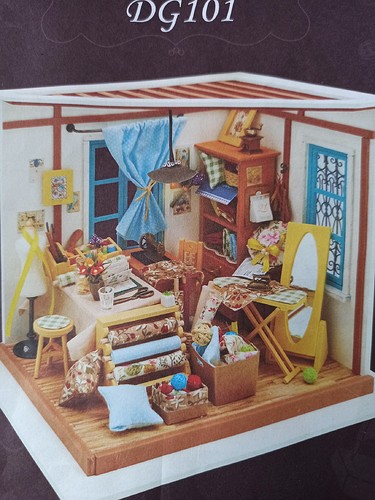 EDIT: bugger it to bognor. I’ve just realised I made a mistake and put the wrought iron window bars on the inside!!!

I think this is my favorite of yours because I love that it is a craft room. Where the magic happens, right?

I think it looks perfect and not overly cramped. The bottle cap looks fantastic. I would have never known.

Love this one! And your edits make it better, I’m sure. Love the blinds and the bottle cap!

Thank you @gozer and @Abbeeroad I’ve added a picture of what the room was supposed to be like, with silly lampshade

Sewing is my jam and I need this. Really awesome.

Wow, yours is so much better! Could you imagine actually crafting in that crammed space?! I know a lot of us do it, but the swearing involved…lol. Those of us with minimal craft space dream of a life-size version of your design/layout.

Yes, that is overstuffed! It gives me anxiety. I like your version much better.

Adorable, and so tiny!

It’s nice that the kits give you so much; that lets you edit and make it your own.

Your alterations are spot on. And this is my favourite kit too. *I love kits! @JoyfulClover

I looked for this one on ali but they were all quite pricey, was that the case for you as well? I mean, worth it since it’s a fave but how come the one I like the best has to be the most expensive? Darn these (homemade) champagne tastes? LOL

Love this! Yours is WAY better than the box picture

@Edel this is fantastic! You do such a great job on those kits!

I love all the changes you made…I imagine it would take hours to make because I would be stopping to admire each little tiny thing!

Thank you so much for those tips. I tend to fold and then glue them into place, but I love the tip with foil, definitely trying that.

@Magpie I have just had a look back. I tend to pay around 15-20euro a kit and about another 5 or so delivery that’s about 25-30Canadian. I do shop around on there though as there is a lot of variation and some of them charge a lot for shipping

Your miniature is like the pinterest version of a craft room, my own room looks much more like the bottom picture (but waaay more cramped and cluttered, because my room is tiny!). Your improvements are all great. I hope you’ll have a craft room as nice as this in your new home!

Ohh, i love this and all your edits including the wrought iron on the inside- that’s SO something a crafter would salvage and hang in their creative space.

Oooh yes, I’m taking that. Yup it was totally intended to be on the inside and not a mistake at all, no siree

I want to live in that room! You made all the right choices and it turned out great.

It’s so tiny! I love that you make these! I would like to do that, but I don’t think I have the patience to fully finish them, so I’m glad I can enjoy them from afar!

I think it looks more Tiffany with it on the inside! It looks so lovely. I would like to curl up in that room to keep you company whilst you whirl about.