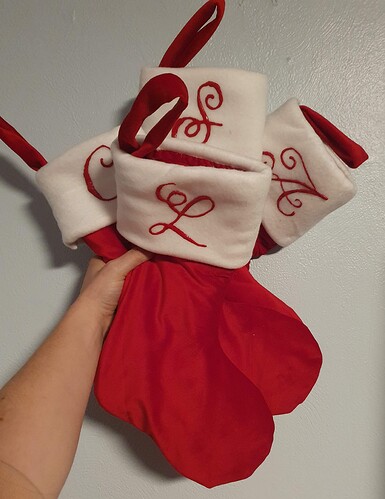 I’ve wanted to make my own Christmas stockings forever, and decided (last year) “this will be the year!”. And I would also make 5 stockings.

Of course I am known amongst my friends to take the complicated route when I start something, so of course I spent probably WAY longer on these than needed. It’s ok, I still completed them and they are adorable.

I wanted stockings that:

I should also have added big to the list but even though they might be smaller than I originally wanted they are still big enough to add the needed treats in them.

ALSO, I didn’t have much to spend so I HAD to make it cheap. I found some really cheap white felt blankets (used 3, but could have gotten away with 2 had I not messed up). And then some crushed velvet that looked nice. However, I also bought some really nice velvet curtains that were just too long so I had to cut off a foot or so… turned out those cutoffs were enough for the stockings so I used that instead

Anyway. Because I wanted it to be fluffy I ended up with several layers of the white felt. And because I didn’t want it to stretch I added a layer of white cotton fabric. In the end i had 3 layers of felt and 1 layer of cotton fabric. and this is for the inside. 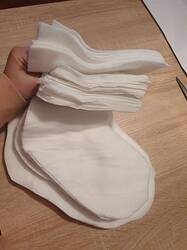 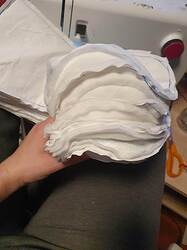 The outside went pretty easy, and the insides slipped in like a hand in a glove. (that’s my hand, so as you see it will hold a bunch of things even if it’s not huge) 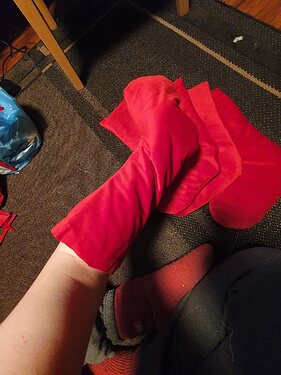 Then came the hardest part of the sewing adventure, the cuff. Because the stocking was already really thick, and because the cuff was even thicker, it was impossible to use my sewing machine so I had to sew them together by hand.

My initial idea for the monogram was to embroider it on, but because of the deadline I had to think of other ways to do it. I was thinking puff paint, or something like that, but couldn’t find it here, instead I found anti slip liquid you would use beneath socks. Except for it being sort of sticky it worked really well for the letters.

I’m really happy with the whole project, it might not have been as easy as it should have been, but in the end the result is a fluffy Christmas stocking which is really nice to touch, and with our monograms. 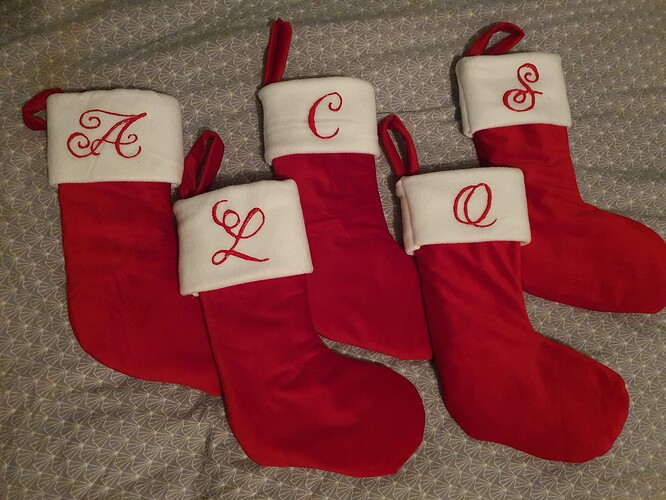 Very cute! And it’s always nice to find a supply that fills a niche you need when the expected item isn’t available. Your handwriting is really nice!

Wow, the writing is beautiful. They look embroidered!

Don’t they, though! They look so professional.

They look great! All your attention to detail towards getting what you wanted really paid off.

These are wonderful! The letters are wow!

These look so pretty and festive! What a great way to use up the extra fabric from your curtains. They all look beautiful on their own, but all together, they really make a statement!

Thank you everyone for the lovely comments

I’m adding a closeup of the most intricate letter so you can see how it looks like. The anti slip stuff worked really well, it had a thin tip so i could write really fine. It doesn’t look as snooth close up but it still looks better than the rushed ambroidery i would have ended up with had i chosen to try that

at least it’s a nice base in case I do end up embroidering them in the end. 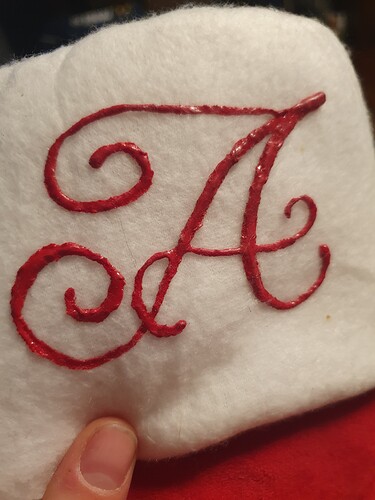