I made this splash back to go behind the taps in my bathroom, this was a project that was a long long time coming. I actually haven’t checked to see if it’ll fit behind the taps yet fingers crossed

It’s just a simple abstract design. The tesserae were salvaged by my ex husband over 20 years ago. He was working on the renovation of an old church. The floor was all stone mosaics that had a carpet glued on top for the preceding few decades.

The renovation included ripping up the entire floor mosaic and all and throwing it away I despair of people sometimes. Anyway my ex brought some of the tiles home, without permission.

They’ve sat in a box forever, there are loads and they are solid stone. This was just an abstract to use the stones as is, without trying to shape any of them.

I glued them down, grouted it and then poured a coat of resin as the stone looks best of it looks wet. 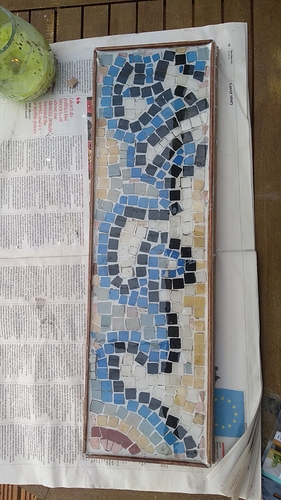 So so many left 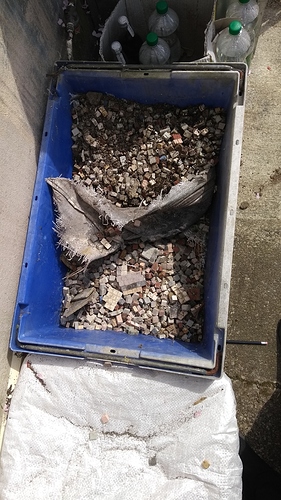 Love it! It would have been a crime to throw all that tile away. Hope it fits!

Fingers crossed it fits! If not where you intended, than somewhere else. It’s such a groovy little piece of history.

It came out beautiful! I love the new life you’re giving those tiles.

When I was growing up my grandfather had the coolest yard. Two acres in the middle of the city, with a beautifully kept lawn, and a castle he built out back, about the size of a bungalow. The yard also had these beautiful white marble paving or stepping stones that he had set into a few paths, and as the boundary of a badminton court. Then, off the back of the house, he had built a curved stone wall, about 3’ high, out of beautiful deep red stone that had been cut into curved blocks. I never thought much of it, besides that it was beautiful, till after he died. At the funeral people were joking about how he had stolen the marble and stone blocks from the Manchester railroad station that was being torn down. The paving stones had been the white marble floor there, and the curved blocks had been the walls of the rotunda! Apparently when it was being demolished, everything was just supposed to be thrown away, and he hated the waste. So he would drive over at night, trip after trip, in his giant gold Cadillac, and fill the trunk, till the bumper was nearly dragging on the ground.

Awesome backsplash! Is it going to be made removable or are you planning to permanently glue it in place?

It’s going to be screwed to the wall.

@MistressJennie that’s awesome of your grandad, I hate when these things are just chucked away

Here’s a link to a picture of the train station. The rotunda is on the right hand side. The blocks he walked off with were the deep red along the base of the building. 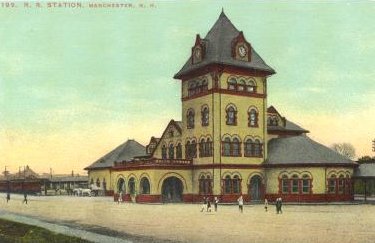 This is so cool! The project itself, but then the provenance of the materials, too. Seems like you kept the best of the ex!

Neat! Was it hard to make?

It was very easy. I needed a no brainer craft. The steps are

Awesome! I want to try.

Lovely! The design and materials have a nice mid century vibe.
And I love that it was rescued.

I really appreciate the top coat of resin. How did you get it to stay on the tile and not ooze over?

So happy the tile was saved! You did great things with the salvage.

There is a lip of the wooden surround, about 2mm above the surface of the tiles and grout. Plus I was parsimonious with the resin.

I have worked with resin and the bubbles are a killer, so I admire how clear yours is!

As little stirring as you can get away with. The reaction to cure it will happen in any case, so if you’re prepared to leave it sit for a couple of (stinky) days, it’ll eventually become unsticky, even if you’ve not mixed it really really thoroughly

Ugh, everything I’ve read harps on making sure it’s completely mixed. To the point I just assumed that was the primary goal.

I will have to test out another project. But I’m always working on something I don’t want to mess up. People who do samples SLAY me. (No, I never swatch knit) It’s the right thing, but I cant help but feel like my current go is a waste of materials. I’d rather just dive in and be devastated! Ha!

I hear you! I never want to ‘waste’ materials.

So I’ve been doing a bit of reading on these resins (it’s been years since I’ve studied the chemistry of them and I’ve forgotten it all-i actually have a PhD in these types of materials) you do need to mix well, but balance that with the fact that both the resin and catalyst are low viscosity, so it’s not like you’re trying to beat honey into peanut butter, more like milk into tea. So a gentle, slow mix, but making sure you get into the sides and the bottom of the container, should be sufficient.

At 1-2% catalyst should be enough. That’ll give it a slower cure, more time for the bubbles to leave the body of the resin. Plus it won’t heat up as much as with a fast cure , so you won’t be expanding any tiny bubbles with a hot resin.