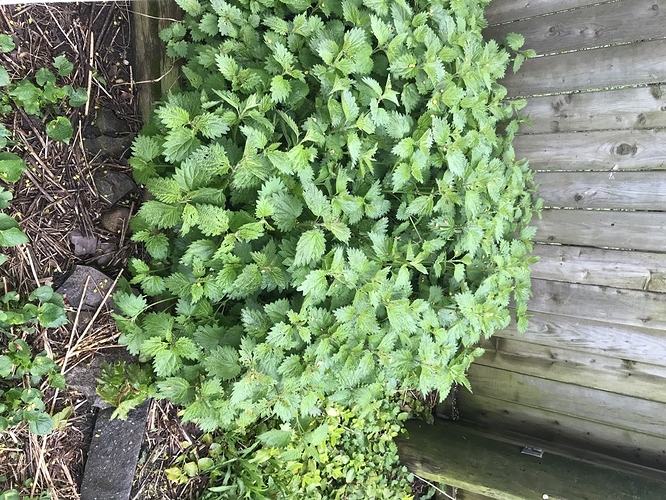 We have a little (maybe not so little anymore) patch of Stinging Nettles (Urtica dioica) that I planted in the back yard years ago. Nettles are one of our favourite spring greens, and this is the time of the year when they’re at their best - tender, nutty and fragrant. (Later in the summer they become gritty and inedible.)

But this year’s crop has been particularly rapid-growing, and since we can’t eat that many, I thought I would try dyeing with them. They’re supposed to produce a green-grey, which is one of my favourite colours. I got advice from several books and websites, but the best all-around source seemed to be Rebecca Desnos. Following her advice, I simmered the plants (leaves, stems and all - even a few roots) very gently for a few hours, never allowing them to come anywhere near a boil. (She suggests that lower temperatures produce better colour.) Then I let them sit overnight and repeated the process again the next day. 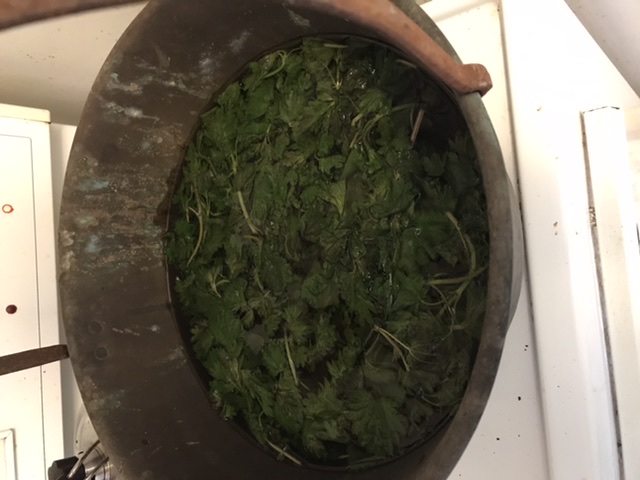 Desnos recommends using an aluminum pot for brighter colour, but I don’t have one large enough to be of any use. I do have a large copper cauldron, though, which I thought might be better than stainless steel.

After the nettles had been simmering for five or six hours, I let them cool down again and strain out all the solid material. I used a couple of layers of very fine nylon net to filter out the tiny particles that gathered at the top of the liquid. Then with the plant material safely out of the pot, I brought it to a boil and reduced the volume a bit. Interestingly, when nettles are steamed or boiled for eating, they have a very distinctive and (I think) pleasant smell, but cooked at this lower temperature, they smelled very different. And not especially good.

While the dye was cooking, I prepared the fabric by pre-treating it with soy milk. This is another Desnos favourite, and is often referred to as “soy milk mordant”, though it’s technically a pre-treatment rather than a mordant. Whatever. Many dyes work best on animal fibres like wool or silk, but plant fibres coated with soy milk take the dye more like wool than cotton. I thought I’d try it, since I was dyeing cotton.

I soaked the washed fabric in a tub of 50/50 water and unsweetened soy milk for a day, then removed the excess liquid in the spin cycle and hung it to dry. I repeated that twice more, to build up a better deposit of soy protein on the fibres. 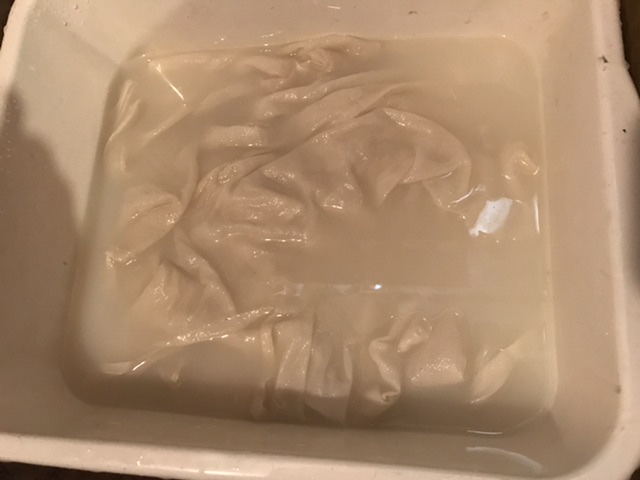 Then the fabric was put into the hot nettle solution and simmered for a few hours before being allowed to cool and sit overnight. I stirred it regularly throughout, to keep the fabric from settling in any one position. The next day I put it through the spin cycle and hung the fabric to dry for three days before rinsing the dye out. (This is another Desnos suggestion, and she’s right - very little dye came out after letting it rest on the fabric that long.) 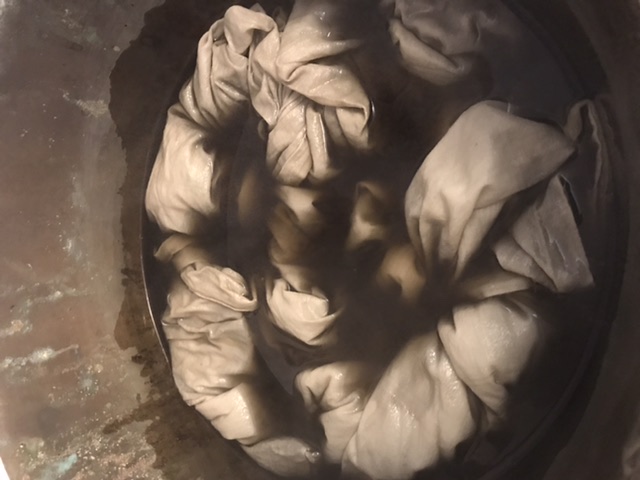 The final colour is a very pale green gray, just as promised. (Though in the photo it appears only slightly off-white.) It seemed a bit blotchy when it came out of the dye pot, but in fact it rinsed out with no irregularities in colour at all. I think I have enough to make a summer shirt out of this very light-weight cotton. 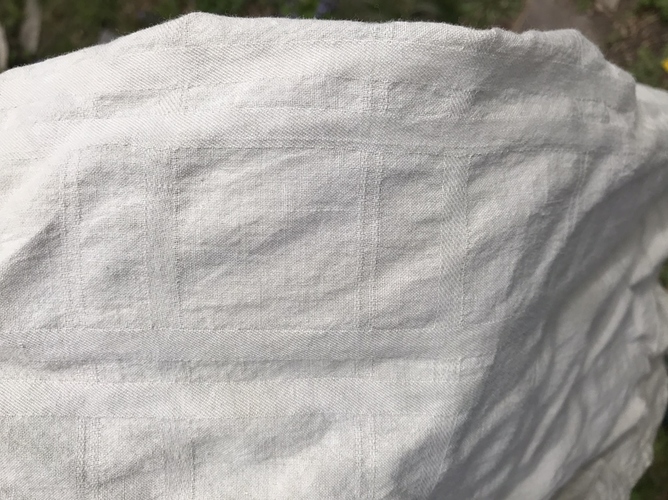 (Sorry all the photos are oriented sideways. Nothing I tried seemed to fix it.

Thanks for sharing all the steps in the process. Please show us the finished shirt, also!

Interesting. Soy as a mordant, who knew?! We’re ‘blessed’ with an abundance of stinging nettles here too.

I’m interested in how you eat them. The standard recipe here is nettle soup, but it doesn’t really do it for me. Any other suggestions?

Very interesting! Thanks for sharing your process and tips. Good luck with the shirt!

Edel, how can you NOT like nettle soup? Pure pleasure, to me. Of course there is usually some chicken broth and other bits and pieces involved, but the nettles are still the dominant flavour. I get that it’s one of those tastes you either like or not. 25% protein though, so not to be dismissed lightly, especially for vegetarians. (There were supposed to be communities of Medieval monks who lived entirely on nettles. Nutritionally possible I suppose, but a bit dull.)

Apart from soup, I usually just soak the leaves (snipped off the stems, which get fibrous quite early) and toss them still wet into a pan in which I’ve fried a bit of onion and garlic, cover and let them steam for 10 minutes or so. Unlike spinach, you don’t need to worry about over-cooking nettles - they stay intact even when they’re well cooked. A squeeze of lemon over the top and it makes a very good spring greens dish.

I will be sure to.

Wonderful! Marvelous experiment, how fun. I hope to do a bit of flower hammering etc this summer, we’ve got lots of echinacea, marigold, snap dragons, periwinkle and black-eyed susan in the yard. There isn’t room to grow any nettle but I wonder about planting it in the alley along people’s fence lines. That would keep any taggers from climbing or painting our fence, lol. The city weed wacks in the fall, that’s plenty of time to harvest for dining or dyeing.

Nettle is great in place of spinach or kale. Try it in filo pastry with onion, oh dear, so delicious my mouth is watering.

At what height would you consider them too old to eat. Nettles love our garden. We had a load of topsoil mixed with rotted farmyard manure for our raised beds, and they came with more nettle seeds than you can shake a stick at-they are coming up everywhere.

In a total craft funk today, so I’m going to make nettle soup tomorrow’s goal. I realise that I haven’t eaten it since I was a child, or was cooked by my mother and she isn’t the best cook. Mind you since my other half has gone veggie (after we got married?!) There will be none of my lovely chicken stock in there.

Not so much height as age. I think by mid-June here they’re pretty much done. And usually by then the bugs have chewed them up pretty badly, so it’s a fair cop.

If you’re inundated, my advice would be to pull up all but a small section in an area that they can’t easily spread from. Be ruthless now - once they’re established you’ll never be able to root them up no matter how thorough you are. And for added safety, the ones you leave shouldn’t be allowed to go seed. Once they’ve flowered, cut the tops off.

For soup, incidentally, I usually cut the leaves up a bit for ease of eating. Either I chop them before cooking or more often (because it requires less handling of raw leaves) I wait until they’ve simmered a few minutes and then snip them up in the pot with kitchen scissors. Snip! Snip! Snip! Once they’ve been in hot water for even a few seconds, you can handle them sting-free.

This is cool and interesting! I’ll have to start dying some of my own stuff!

And I had no idea you could ingest nettles, much less dye with them! And a soy bath?? I’m bookmarking to save after checking what is in my area!