This is project I made about 6 years ago, but I wasn’t on Cster anymore, so I figure I’ll post it here so people can see it!

So the backstory is that my friend’s dog, Oakley had passed in his sleep at the age of 15. He had been her companion since before her marriage, through miscarriages, and after the birth of her only daughter. She was heartbroken at having to say goodbye to him. I approached a group of mutual friends and asked if they would like to chip in for a present for her – if they could help me pay for yarn and shipping, I would make this blanket and send it to her as a gift from all of us.

I used Caron Simply Soft, which gave it a nice drape and sheen and J Tunisian hook. I did some sneaky FB stalking and found a cute picture of Oakley wearing a party hat to recreate. I can’t remember the online program I used to convert the picture into pixels. It had a weird name. 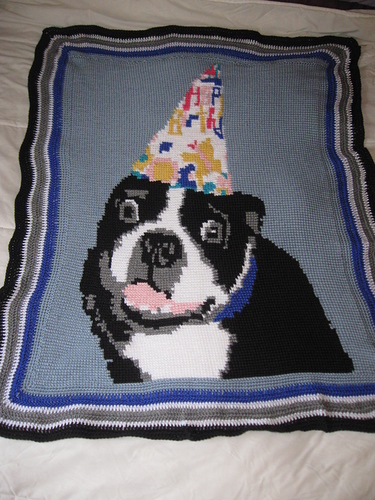 What an awesome remembrance of a beloved pup.

No, I want to say it was like some math equation or something. The picture-stitch conversion part of it was kind of a side project to a completely unrelated and uncrafty website.

This is the best and the most!
(I like to say that, even though it doesn’t “make sense.”)

I seriously just got the same look on my face as Oakley when I got to the photo of the finished piece!! This is so wonderful for so many reasons.

What a beautiful gift and great tribute to Oakley! I’m sure the recipient was delighted.

I love this so hard. It is just wonderful!

Awww he is just adorable, and what a lovely gift

I know that hat was a nightmare! But what a wonderful gift…so personal and done with lots of caring for your friend…wow…

This is the best and the most!

haha I love it! And it totally makes sense to me.

I seriously just got the same look on my face as Oakley when I got to the photo of the finished piece!!

I’m sure the recipient was delighted.

She was! One of our friends gave her husband the heads-up and asked him to film her opening it so we could all see. She just loved it! She told me later that their daughter (who was 12ish at the time) always wanted to cuddle with it.

I know that hat was a nightmare!

hahaha You know it! All the color switching. The back of the afghan was like a giant snarl of colored spaghetti!