Another summery post for you today, and another ‘mangle the pattern to make it what I want’ 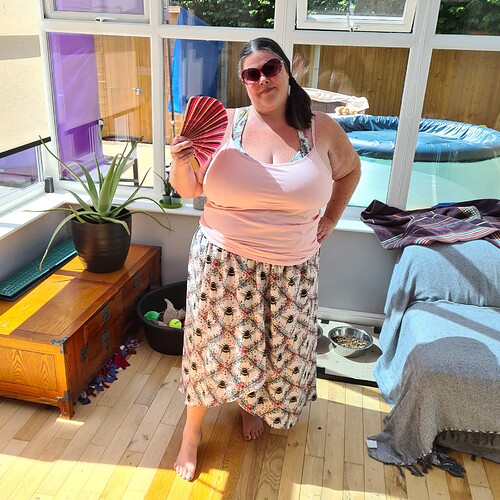 Isn’t this just THE most adorable bumble bee

design fabric?!!! So cute! I of course got it from my fave online fabric shop Minerva, and it’s another design that’s a little out of my comfort range since it’s rather cottage core, but hey who said I have to stick to a specific style?! (I’ve literally had that pink top for years but don’t think I’ve ever worn it until now, lol) 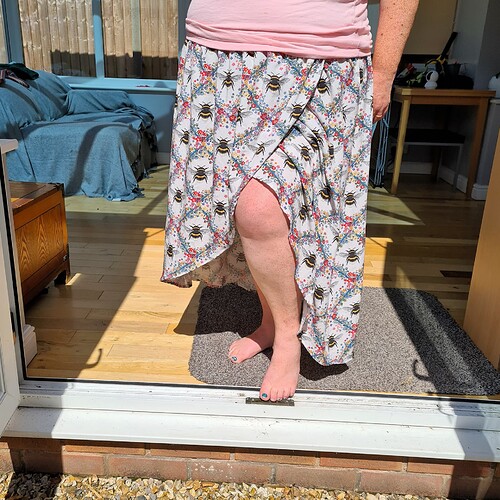 I hadn’t decided in advance what pattern I wanted to use for this fabric, though my initial thought was indeed to make a long floaty summer skirt. I ended up deciding to make this FREE pattern [affiliate link] by George and Ginger, but unfortunately didn’t have quite enough fabric to make the full flare skirt, so I had to half the back panel, but since I also wanted to change it to be an elasticated faux wrap rather than a true wrap with button, this didn’t prove to be much of an issue thankfully! 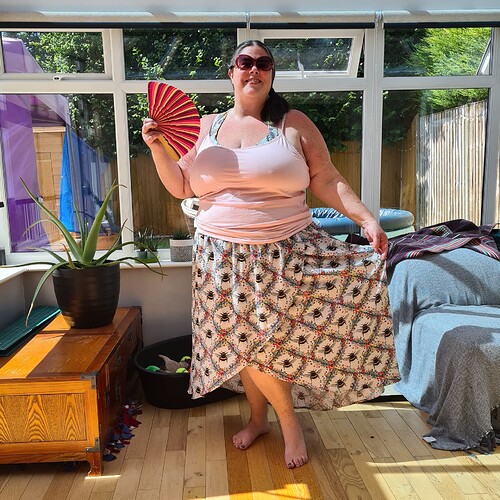 It’s still lovely and flary despite having not quite as much flare as the pattern called for, and nice and cool, which is a good thing since we’ve just had our second heatwave of the year, gargh. Thankfully marginally cooler than the first one tho when we exceeded the highest recorded temperatures in the UK by quite a bit

An even bigger downfall to another heatwave is that we don’t have aircon (obv, we’re in the UK, land of rain and grey skies, lol?!) and our new rescue pupper Arwen is terrified of fans!! 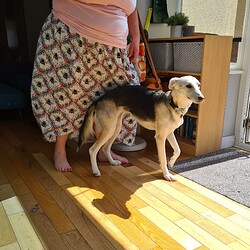 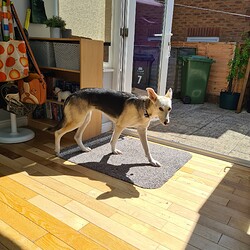 Aaaanyways I love the skirt, and I’m tempted to get more of the same fabric, or possible another from the same range (it’s viscose challis btw) to make a shorter version (maybe with a frill…?), with less wrap coverage and some integral shorts

A very pretty way to keep cool! A really nice, flattering cut and a cute print! So sorry for poor Arwen being frightened of the best relief from the heat!

I turned on the ceiling fan on her 2nd or 3rd day with us and she nearly jumped out of her poor skin!

She’s not toooo bad with my tower fan, but we have a portable aircon thing that I use in my office or the bedroom if it’s really bad, and have like a giant industrial type floor fan we got for last year’s heatwave and they also terrify her (the giant fan is ridiculously loud tho tbf). Hopefully she’ll be a lot less anxious by next summer!!

I think it’s a great fabric pattern and the breeziness of the skirt must be nice. Mangled pattern or no, it’s much better than I could do! I always enjoy your photographs of your sewing, too. That paper fan, oh my!

I love the skirt! And it looks so great on you! Very flattering! Thank you for the pattern link, I may just look that one up…

It’s always so interesting what they are frightened of and how that changes (or doesn’t) over time. Hopefully as she settles in to her new, awesome life she’ll be better able to handle novelty.

That bee fabric is adorable! It looks amazing on and Pink looks good on you too. It’s good to change things up every once in a while.
Arwen looks adorable. She has a little fox face!

Absolutely, I mean when she first came here she was terrified of pretty much everything (like the sound of spray deodorant, cans opening, farts

, lol), we had to sit in the back garden with her for 2 hours because she wouldn’t go inside the house

and even then she wouldn’t go far from the door, but now after about 6 weeks she’s pretty comfortable in the house and us (she’s still not 100% trusting of us tho)

I think her main fears now are vehicles (she’s getting much better tho) both walking near and going in, strangers, anything stick-like which is heartbreaking when you obv think why

and has been a bit tricky since I use a walking stick (sometimes 2) but I make sure and move it very slowly so she isn’t scared, and she has a lot of separation anxiety. But like you say I think with time everything will improve, she’s come such a long way already!!

I know right, if we hadn’t just had her DNA tested we’d think she was part Fennec Fox!!! Lol, she’s actually 29% Saluki, 24% German Shepherd, and 14% each Siberian Husky and Greyhound

And thank you very much, I defo feel like branching out more and trying new things, and new colours!!

We just had my parents rescue pup DNA tested. Isn’t it so neat! No more guessing what your dog is. They had a teacup chihuahua for around 19 years so we were used to a 6 pound dog (and she was chubby). The new pup seems huge at 11 (not fat, just bigger). We had her tested and she was 91-99% Chihuahua and 1-9% Boston Terrier. I swore she was half dachshund. I owe my parents dinner now. Ha!

Wow 19 years, it defo pays to be a teeny tiny doggy! Awwww, my sister’s dog is actually a chihuahua dachshund cross

he’s not one for photos, and he’s a bit bitey 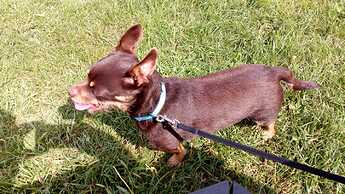 It is so great to look at, they get so much info, Arwen’s results actually found her sister, and seeing the piccie of her sister kinda cemented what the shelter peeps had suspected about the dog she was found with being her sister as she was identical to the sister the dna results had found (Arwen looks pretty different to them both)! We’d wondered for years what Rosie was as she had such weird colouring and spots etc, and only ordered a kit finally this year, we got the results just after she’d passed and found out that she was actually fairly pure, she was half staffie, and the rest a bull terrier mix… with 2% chihuahua thrown in for fun clearly, rofl!!!

My parents pupper, also known as my favorite sister. 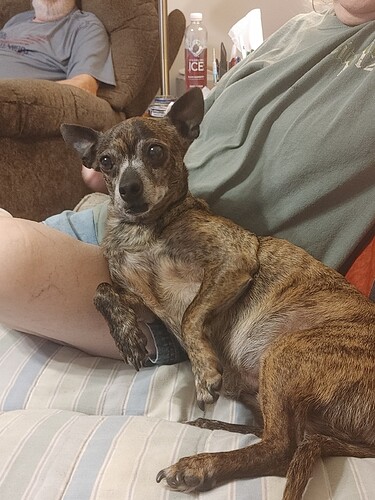 Shes so ugly that shes cute!

Congratulations! This bee-you-tiful piece is a Featured Project this week!

Ooooh thank you so much!