Found a tiny baby sweater in my stash and decided to make something fun with it.

I needed a project that I could do quietly since it was 4 am. Worked on the embroidery and then did the machine sewing and stuffing.

Here is Olga, named after the 91 year old awesome woman and mother of my friend who wore this sweater as a baby boy in Germany. He didn’t want the sweater, but he couldn’t bear to throw it out after his Mom had died, so he gave it to me to do whatever I wanted with it. The tiny circles are for @magpie to prove I also never throw out any scraps! 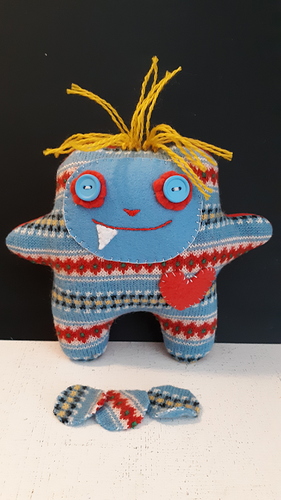 Aw, this is an adorable monster. I love it!

This is the best!!

I love the print of that sweater! Such a great way to turn some sentimental fabric into a cute keepsake.

Olga is adorable and that sweater is perfect! The heart, hair, embroidery, and eye touches make her extra cute. This is a sweet tribute.

I love monsters! But I love yours more for the history behind him!

Awww, he’s so cute! Great idea for how to reuse the sweater.

Thanks! He and his wife were the only one out of 7 kids who did not have kids of their own. I thought about giving it back to him, but he is quite the minimalist and not very sentimental…I am sure when he comes visit me and sees it in my crafting room, he will appreciate that I have remembered his mother in the way she would have wanted.

Olga is just delightful!! Love this so much!

This is so cute. The hair is what gets me. I just want to ruffle it up!

The tooth! It’s killing me. What a little cutie.

This is beautiful and creative.