Paper Valentines on my Silhouette

Despite being happily multicraftual, and owning a fancy cutting machine, and having a bunch of scrapbooking paper in my stash, I never make Valentines or other cards. It just seems like such a big hassle for something that is so each to pick up at the store. 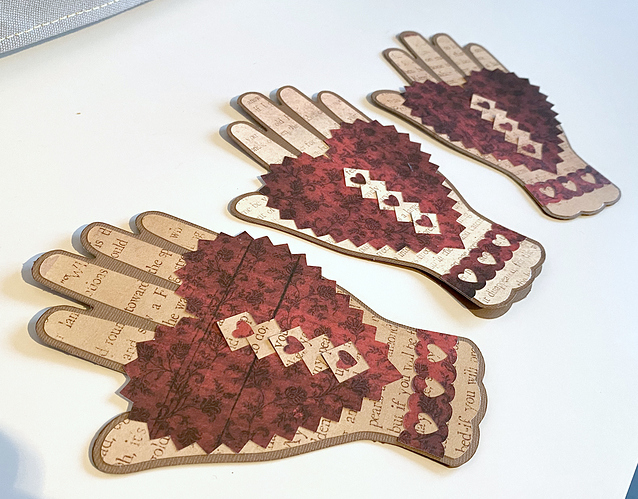 IMG_5043.JPG1440×1128 1.08 MB
But, as part of my effort to be more thrifty, work through my stash, and try new things, I decided to try making a few Valentines with my Silhouette this year. It might help that I only needed to make 3 for the Harry Potter Craftalong card exchange, since not many folks signed up this year.

I did a quick search on the Silhouette Store, and found a few card designs I liked. So I spent about $2.20 on cutting files, and dug all the paper out of my stash. 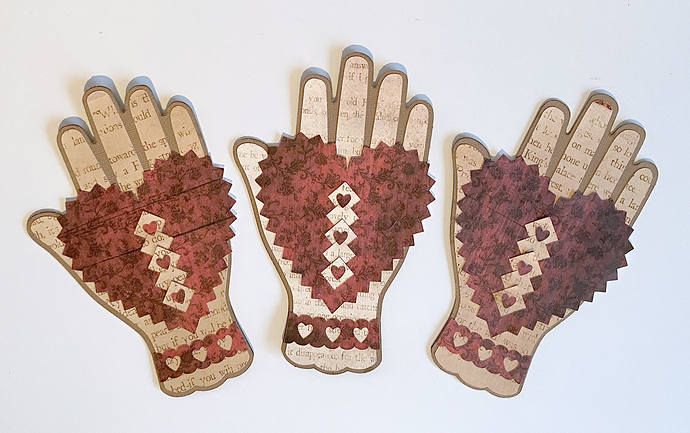 The hearts in hands were actually harder than they looked, and I made a mistake in my paper choices. The hands are cardstock from the Happily Ever After line, while the red hearts are a printer weight paper. You’re supposed to weave the two layers back into one another, so there should be small red squares inside the tan squares in the center of the hearts. Unfortunately the two different weight papers didn’t want to work together, so rather than mangling them, I gave up the second step of the weaving. Instead I took the heart offcuts from the wrist band, and glued them into the spaces. So three pretty cards for $.70 cents! 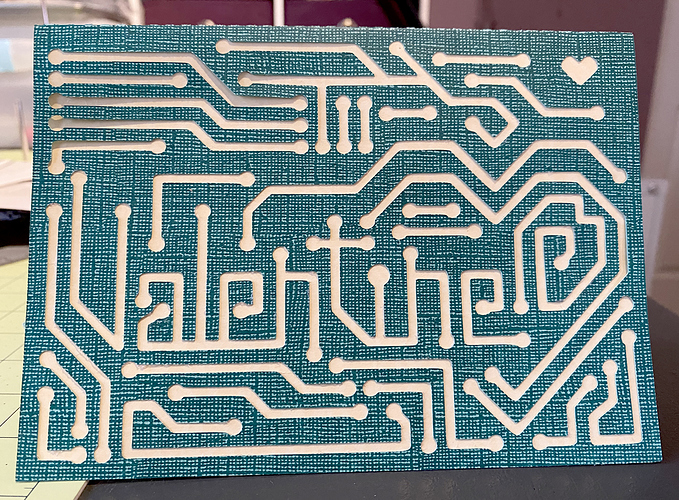 IMG_0124.JPG1440×1060 1.68 MB
Then of course I had to make a card for my actual Valentine, my husband Jim. He works as a programmer/software engineer, so I had to go with this adorable circuit board card I found. When I found the piece of deep teal-green paper, I knew it had to be my circuit board. (The example used red paper. That would not do. Circuit boards are NOT red!

) The design also called for the little flash drive to be attached to the outside of the card, with a rivet or brad, and I didn’t have any, plus I didn’t really like how it looked. And it had the circuit board as a cut out piece laid on top of a blank card base, which I didn’t have a good color cardstock for. So I played around with the file in the design software, and manipulated things until I was happy with them. 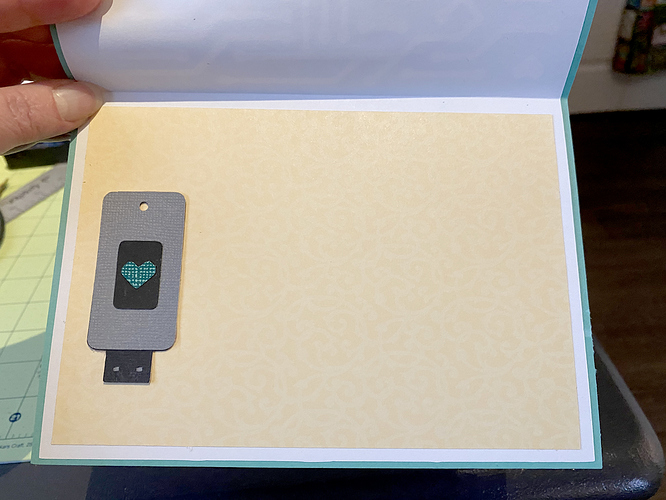 IMG_0353.JPG1440×1080 793 KB
Plus it gave me something cute for the inside of the card. I tucked it into Jim’s Star Trek lunchbox for work yesterday, along with a peanut butter heart. He found it when he sat down with all his coworkers.

The hearts in hands might be the most beautiful thing I’ve ever seen in the cutting machine world; both the design and the papers you chose are amazing.

Your paper valentines look great! The circuit board card is such a nifty one for the techs in our lives

Amazing cards. I especially like the tech themed one for your real life Valentine, and the sweet pb treat that you added with his lunch. Little things like that make the world go round, and a much nicer place

I have no visual on what the heart cards were suppose to look like because yours are super! They look quite complicated but the details really are lovely…the tiny hearts in the hand inside the big heart…what a beautiful card for a day of love and caring!

I bet Jim was beaming when he got his techie card! And not just the PB heart…

Good for you for setting out to do something and getting it done!

Ok, I need to add the word “multicraftual” to my life, and also, those cards are great. My husband works with Linux as a server admin, so he’d appreciate the card your sweetie got, too. Well done you.

I can’t imagine the hand cards any other way, so good call on the rework.

I don’t want to admit how many times I looked at the circuit before I realized it spelled out “Valentine.”

That circuit board valentine! So cute and clever, and I love the edits you made

I like the vintage colors on the Valentine hands and that circuit board card is really fun! What a perfect card for a programmer!

Love that you are “multicraftual”! And all the cards are awesome. I may need to commission you to make another one of those techie ones for my husband for next year!

that circuit board valentine is sooo sweet! I really love the hands too. very nice job1

Those are so much nicer than anything found in a store. Beautifully done.

Eep! Those heart-in-in had cards to TIP TOP! You’d never know there was a work around at play, I can’t imagine them any other way. And the circuit board turned out great, too! I also can’t imagine it in any other color.

These are all fantastic! I think your design tweaks look perfect, like they were meant to be.

I love both of these card designs!! I was impressed with the weaving on the hand card. I never would have known it was supposed to be more intricate. A seamless modification.

Love those hands and guess what? I made almost the exact version but yours are much nicer! Great minds!

Your valentine cards came out superbly! Love, love the heart-in-hands card; your alteration to the pattern is preferable, no doubt. It is just so lovely! And I’m sure Jim’s co-workers were green with envy at not discovering a handmade card from their beautiful wife in their lunchbox. You’re always sharing the love!

Yahoo! Congrats on being one of this week’s featured projects!

I really love all the papers you used for the hands!

Love the cards you made! The circuit board would be loved by my love too. I recognized it as a circuit board, the colour is spot on!

I tried to make cards with my Silhouette but I find it hard to get the settings exactly right, most of the times I tear the paper when I remove it from my cutting mat or my machine didn’t cut it completely.
So I’m in awe by your Silhouette skills!!!