I went outside today to feed my fish and look who I found hanging around the pond, Patchouli the Skunk! Patch for short. He’s named after Patchouli because that was the stinkiest thing I could think of. Ha! Sorry to all those who love it. 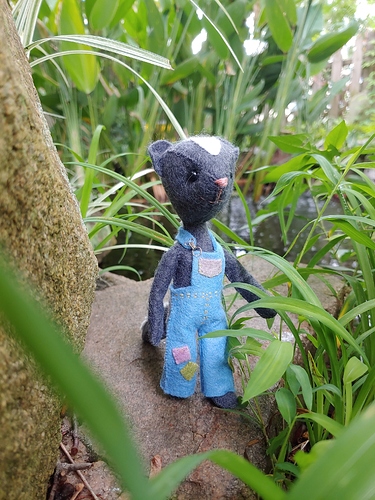 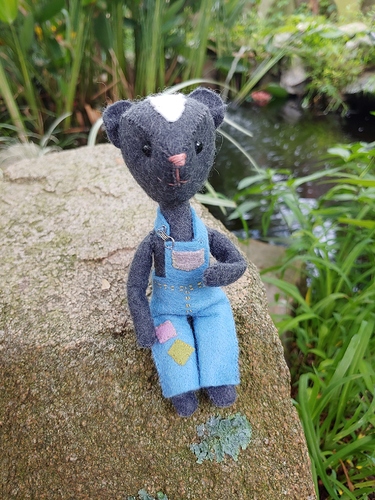 08142012411512×2016 1.54 MB
This time instead of using one of the patterns directly from https://www.etsy.com/shop/CynthiaTreenStudio on Etsy, I altered one of the patterns I already had. I altered the raccoon pattern.
When I was done I showed my Mom and she said he didn’t look done because all the other ones had clothes on so I made him a cute little pair of overalls. I didn’t do the traditional hook on the back so that his stripe would still show. 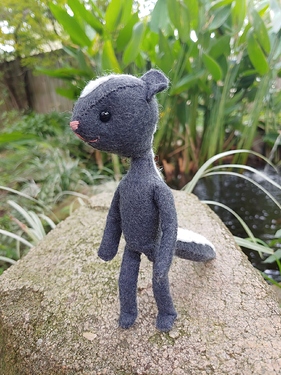 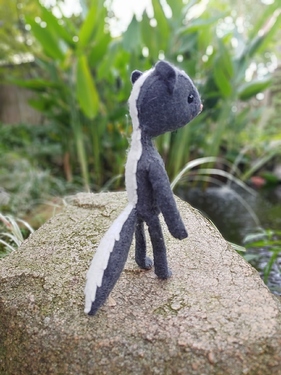 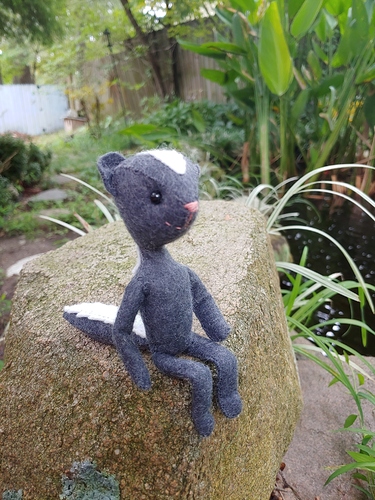 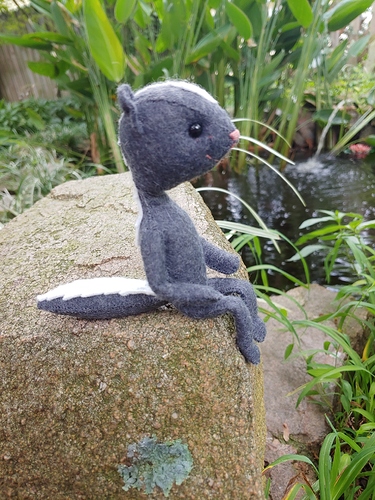 Squeeeal! He’s absolutely adorable! The little overalls and their patches just make him complete. I love how you made the little yellow stitching on the overalls.

His stripe! The overalls! The patches on said overalls! Also, what a creative closure for his overalls, I never would’ve thought of using that kind of closure. I love this all the way around!

He is adorable with or without his clever and detailed overalls!

I love the name you picked…I happen to love patchouli but I am sure to many, it is quite a strong and overly used fragrance! ha ha Cute little guy!

The overalls! Dying! What a great name too.

They are lovely and cute

Well, as someone whose username is Megaskunk I obviously love it!
He’s so cute! Love the lil overalls!

patchouli for his little patches too!
he’s very cute.

So cute! Love the overalls!

He’s adorable! His name is perfect, too. And great job modifying the pattern! I think he could use a pair of white boxers with red polka dots for the times he can’t be totally naked

Lol. That would be cute.

It’s like I can smell him from here! Good things he’s so adorable! And he looks happy as a little nudist, but his overalls are super cute.

Love him! Patchouli is a great name! My auntie used to love the smell of skunks, if we were driving and she smelled one we would have to turn the car around and drive thru the stench again

I have heard of people that find the scent a good one…personally, I get sick just thinking of smelling skunk. I do think they are cute animals and make wonderful non-smelly stuffies!

He is ADORABLE!!! I love everything about him! Your little cast of characters is so sweet and you are clearly having WAY too much fun making them. You do such an awesome job, such fantastic attention to detail!

What a cutie! I like him au natural and in his sweet overalls. So clever to make them so that this skunk still shows his stripe! And a funny name, too! I like patchouli, but often times it is applied too liberally for my sensitive sinuses or in combination with (used to cover) other scents more universally acknowledged as unpleasant. Ahem.

Cute! Can we see the back of the overalls? Looks like you made them halter style?

Congrats! Your Patchouli the Skunk is one of this week’s featured projects. You are awesome!

Thank you so much! These little creatures have been a lot of comfort for me. I’m glad you guys aren’t tired of seeing them yet because I have at least 4 more planned.