I love this knit pattern on Ravelry called Pfeilraupe, and had just the right amount of handspun yarn to use, but I knew I wasn’t going to learn to knit any time soon. So I decided to wing it and apply the chart to crocheting. There is a Tunisian crochet version already, buuut…that’s another skill I lack. The knit pattern’s chart was very easy to follow so I stuck with it. However, I did somehow get my long rows longer than they were supposed to be keyholes should be a lot closer to the edge) but it’s all good, I still have a triangle. 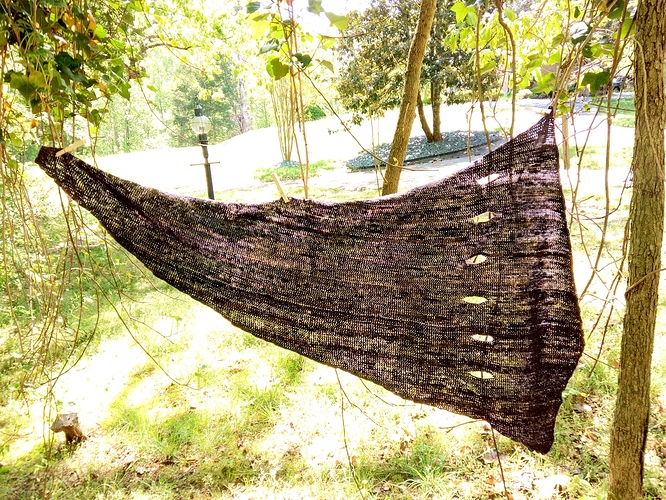 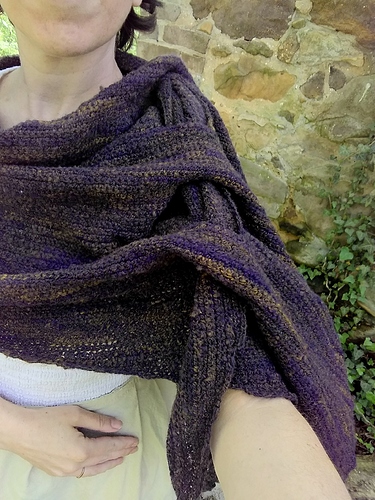 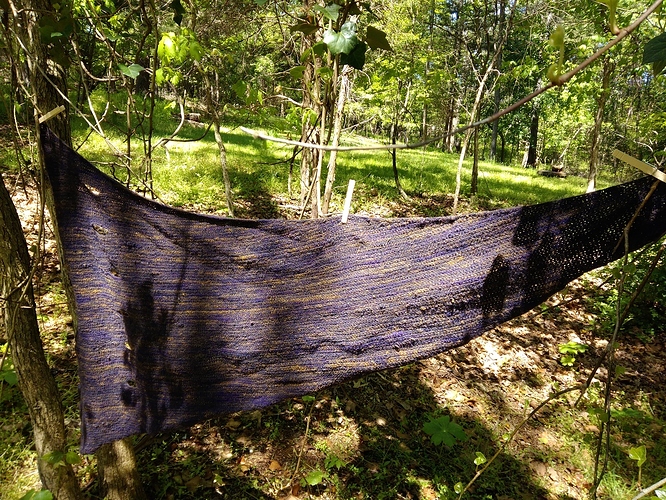 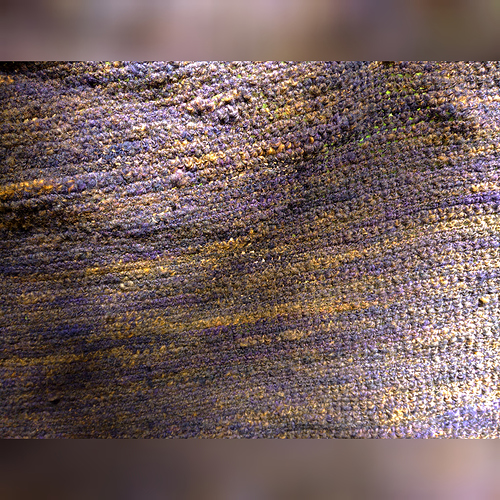 When the yarn was still on the spindle: 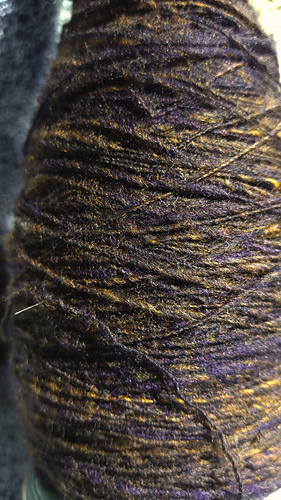 Wow. This is COOOL! I want one!

That is gorgeous. The yarn and the finished product. Good for you for transforming the pattern, that’s an awesome skill to have.
Are you happy with the hole placements? It looks very nice on but if it’s folding over on you or feels not-quite-right I was thinking you could shorten the edge there by weaving in some lines of stitches at a right angle to the edge and gathering them in tight to create a scalloped edge, maybe? I haven’t seen it in action so not sure if it’s comfy the way it is.

Purple and gold. Wow. Did you dye this and if so, with what? It is truly spectacular.

Stunning work my friend! The spinning, the pattern conversion, and the crocheting! It came out beautifully.

Thanks! I’ll pin up the edge to see if that idea will work, but it does lie nicely as it is. It’s going back over my shoulder in the photo. The pattern has the holes lined up with gradual increases in stitches at the end of that short side, so the error I made just makes that lip/ruffle a little more pronounced. It’s really a straight line, it just looks wonky how I hung it up in the photo!

I can’t take dyeing credit, here is the company that produces it: http://www.rowantreewoolery.com/hm/?product=night-sky-potluck-roving

Pretty! I’ve been eying the knit version of this for years.

I have the knit version favorited for awhile now, so this looks yummy! The colorway is wonderful! Good for you to jump in!

I also have the knit version in my library…I knew someone would try a crochet version…and it is quite lovely and works as intended!

Great job…love the colors as well.

This turned out beautifully! I’ve often admired scarves with this pattern. I like how you kept reworking the yarn and the pattern until you were happy. Love to hear the journey

This is really special!

Oh my goodness! The yarn, the pattern, the way it drapes on you. This is just stunning.

That’s BEAUTIFUL! You did an amazing job!

Congrats! Your Pfeilraupe is one of this week’s featured projects. You are awesome!

Oh, right on! Thank you bunches!

I think you’re going to get a lot of use out of this beauty! Super cool!

So different! I adore this project!