I was scrolling facebook and had a tasty looking recipe pop up, so naturally I read it out aloud to my husband. He pointed out we have everything but the asparagus, so that was dinner decided

Look at this and tell me it doesn’t look delicious: 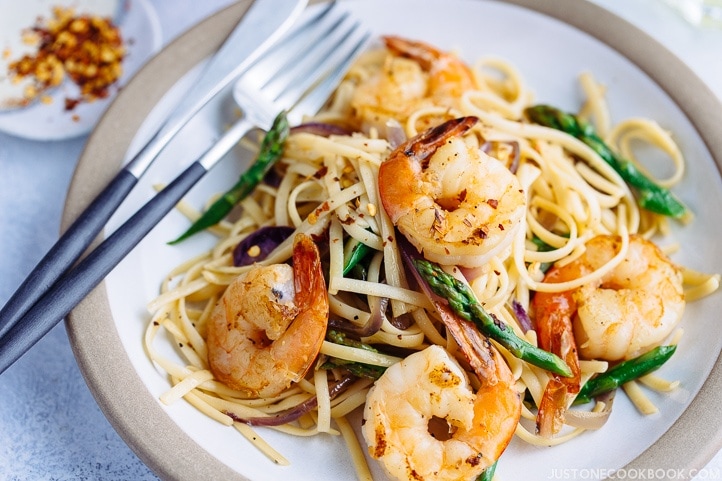 Japanese Pasta with Shrimp and Asparagus 海老とアスパラガスの和風パスタ • Just One Cookbook

I really like Just One Cookbook. The recipes we’ve tried have been really good, and easy to follow. 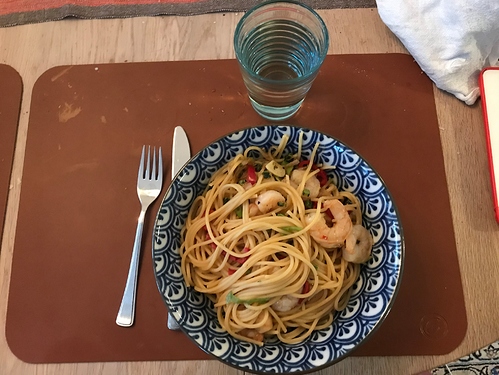 I mostly followed the recipe, but I made some changes due to the sad lack of fresh asparagus in the house. I also didn’t make it gluten free since we don’t have any health reasons to do that.

(thawed before cooking)
Spaghetti instead of linguini
A dried piri-piri, seeds removed and chopped. I think I might have used half of it in the end because I know they’re hot!

Chopped stalks from black kale (I chop them up and put in a bag in the freezer when cooking black kale)
A sad looking sweet pepper I found in the fridge
A large spring onion
Kikoman soy sauce
I have dashi powder that’s prepared 1 sachet to 2,5 cups water so I prepared a batch while I prepped the rest.
Fresh ground black pepper
Olive oil
Salt
Butter 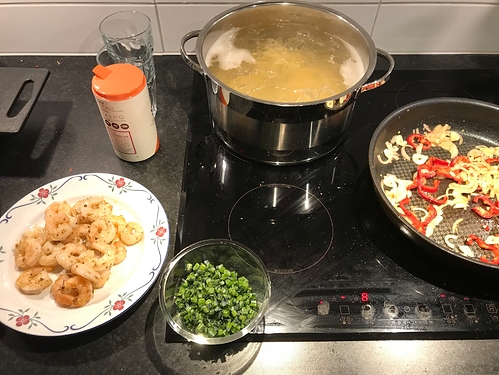 As I said I mostly followed the recipe, but I made sure to prep everything before starting the pasta water. Our induction stovetop is quite quick when it comes to boiling water and with 9 minutes of boiling time I wanted to be sure I could finish the rest without the pasta getting cold or overcooked.

I had to cook the prawns in two batches to not overcrowd the pan. I used a few more than the recipe called for and didn’t cook them until golden, just until pink and a hint of browning.

After sauteeing the onion and garlic I added first sweet pepper and then the chopped up kale stalks. Spring onion was tossed in right before the cooked shrimp went back in. I have to admit I didn’t measure the dashi or soy sauce. I just splashed in what seemed like enough and adjusted as needed.

If (when) I cook this again I’ll try not to over season the prawns. I added more salt and pepper when I flipped them over and I could have skipped the salt.

All in all a very nice dinner, and the recipe was well written. I’ll try it with asparagus one day… There’s still half a bag of prawns in the freezer!

I will have to try out some of the other recipes on her blog…everything looks delicious!

Looks delicious! I’ve also used Just One Cookbook’s recipes before, and they have always come out very nice.

YUM! It looks and sounds so good.