We’ve had quite a few ball-oriented crafts posted so far this year, so I’m tossing my balls into the ring! 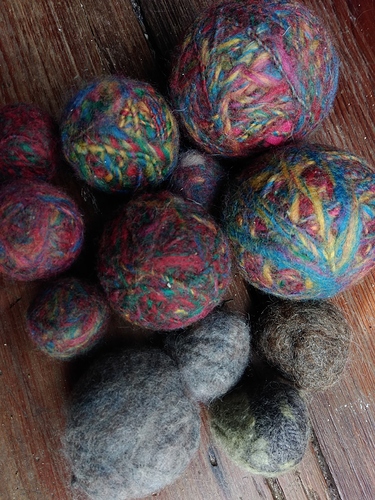 P_20200429_1517331224×1632 938 KB
I’ve been meaning to make wool dryer balls for ages, but I kept putting it off for when I had some unattractive wool or yarn to use. I concluded that that’s not going to happen in the foreseeable future, and instead used some delightful handspun rainbow yarn I received in a swap on the old site.
The centers are scraps of bedsheet yarn that were too short for any real purpose, to minimize the amount of yarn used. The big ones could use some more agitating before I put them to work.

It turns out this cat I’m fostering goes wild for wool balls, so while I was at it I made her some smaller ones to increase her toy supply. The next time I do this I’ll put a bell in the middle.

And I still had space in the nylon stockings I was using for running the balls through the washing machine, so with other wool I made a few oblong felted stones as well, which are ball-like. I felted some non-spherical things as well but I don’t want to go off topic.

Since one can never get enough balls, I also present to you my appropriate dinner: 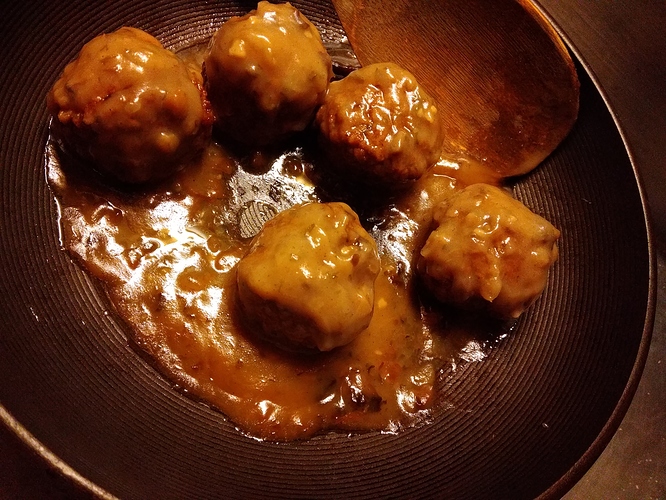 Love the stripy yarn inclusions in the dryer balls. And your dinner looks yummy, too.

I adore that you used the good yarn! It will make you happy every time you open the drier and see them in there. And kitty balls, hahaha, too fun!

What will you do with the rocks? I’ve been working up the mojo to embroider on another one of mine but it is really difficult to do so I’m hesitant to even give it a go again.

So true! They’re the cheeriest of dryer balls, and I like the stick-candy look of the yarn as-is more than knitted or crocheted.
I’d made enough felted stones for a pebble rug back in the day, which eventually I’ll redo, and I might make it bigger since I still have stone-colored roving, or offer them as part of my fiber arts group’s fundraising goods.

Diggin’ your balls, yo!

Oh my gosh, show me this rug? That sounds amazing, I’d never want to step off that thing. You’d have to push me to get a turn, haha. 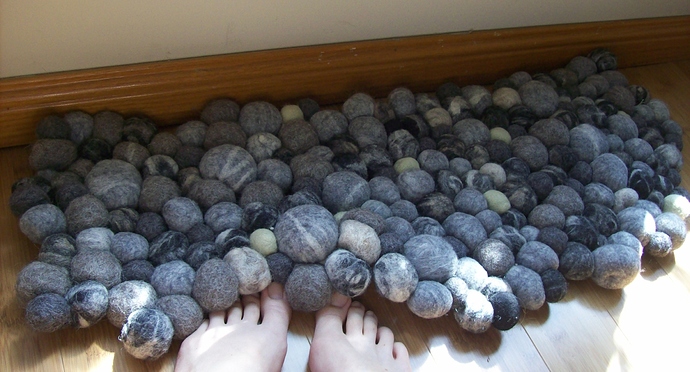 Oh, I am wild for this project! Tell me how you did it? I made a little string of just a few balls and it took forever.

It does take forever, that’s the main thing I remember about the project. I’ll do some mock-up photos…
Once I had enough balls felted stones on the string, I folded it so two rows of stones were touching, and this was the shortest edge. 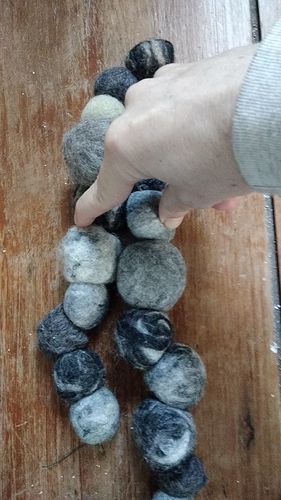 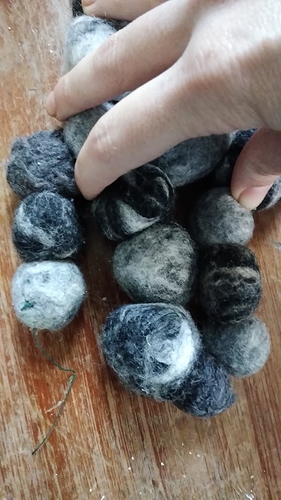 158842172183318896311613117604191836×3264 1.26 MB
I would also stitch back through previous rows of stones when it was easy to do so (some of the fibers were easy to get a needle through and others had very tight felting).
With all the stones being different sizes it quickly takes on an organic shape, but the edges can stay pretty straight (if that’s what you want) by sticking with the same length of string each row and then adjusting how densely the stones are squished together. 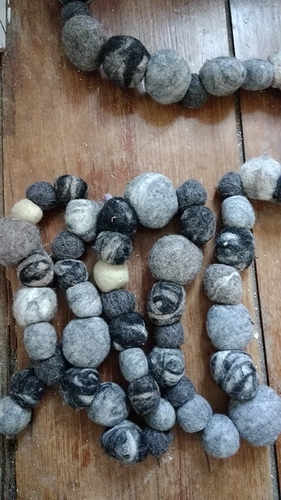 A spiral construction would probably still work well if it were a big enough rug, but whether going for a circular or freeform shape I would move away from the simple spiral after 5-10 loops around; doubling back in areas with predominantly smaller stones would help round out the shape. 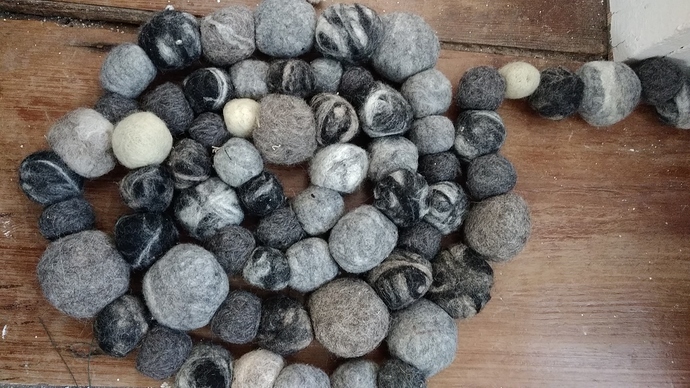 158842227527913948664596544011981632×918 723 KB
As you see here, the string of stones looks decently round when it’s just laying there, but it’s full of gaps… These could be filled with loose stones (not in the string), but otherwise you have to try squishing together the gaps while stitching, and that adds tension to the stitches that could more readily break. And it ceases to be circular as stones on the string are wrangled to close the gaps.
Meanwhile, I like the look of the string on its own: 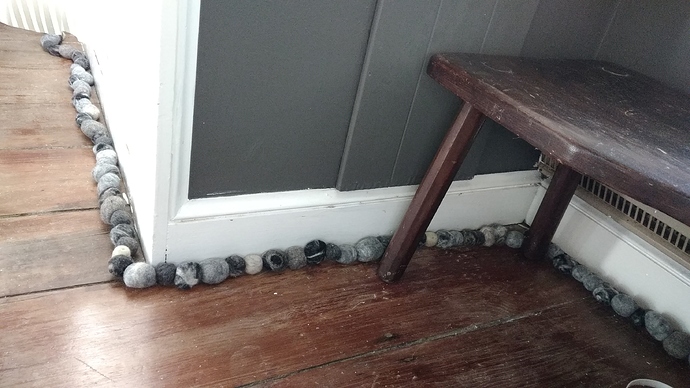