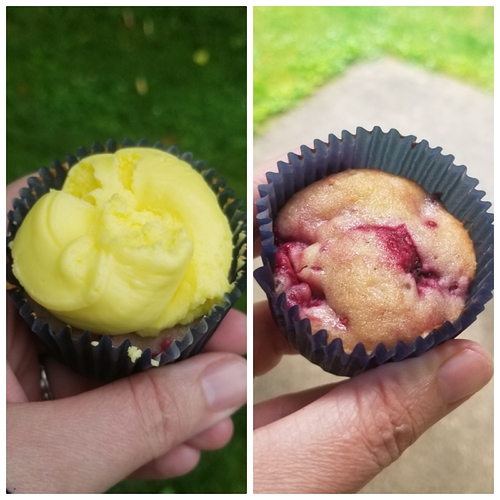 Next up in my summer Pinterest cupcake series are these lemon frosted raspberry cupcakes.
We followed a recipe for raspberry cupcakes that added in frozen raspberries. This recipe was only supposed to make about 10. My son was filling the cupcake liners about 1/4 full–like usual–while I was on the phone with the vet office concerned about my dog (who we sadly had to say goodbye to only a few days later) and he did not know that this recipe made a smaller amount so the cups needed to be filled fuller. The point? They don’t rise. While they turned out ok, we will not make the cupcakes again so hopefully you’ll forgive me not having the link to them.

The piece de resistance though, was the lemon frosting. Oh my goodness! It is the best frosting I have tried so far this summer!

Ooh, those look yummy! I’ve done lemon cupcakes with raspberry frosting, but never the other way around.

They look delish! I love the combo of lemon and raspberry. I like the summer of cupcakes idea too !)

Raspberry and lemon is a great flavor combo. They sound delicious!

I’m so sorry for the loss of your dog.

(the cupcakes look delicious…lemon and raspberry go so well together)!

I’m sorry the cupcakes didn’t work out and about your pup.