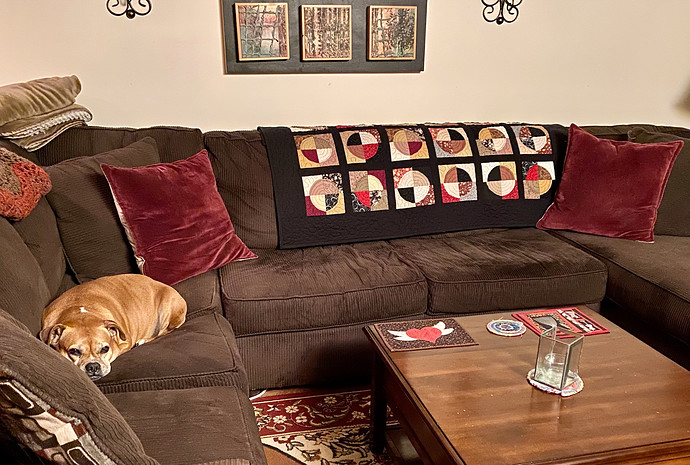 Screen Shot 2021-02-23 at 6.28.37 AM2012×1356 842 KB
This project was only 10 years in the making. Back in 2010, I was in a Quilt Block Swap on Deadster. Participants submitted quilt block ideas that the group might like, and each swapper picked a few blocks they’d like to receive from their group of partners. I picked the Raw Edge Circles block, designed by Cluck Cluck Sew. This particular set of blocks was made for me by SimplySandy on Deadster. (Not sure if she made the leap to LC.) 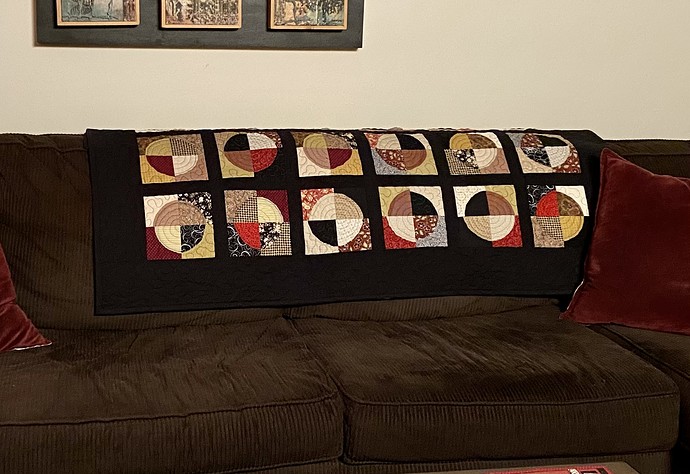 IMG_29062028×1396 597 KB
At the time, I had hoped to make a quilt for mine & my husband’s shared studio space, which was often cold. Unfortunately that didn’t work out. The blocks I received from 3 different swap partners were just so disparate, that I couldn’t make them work together in 1 quilt. I turned some from one partner into a wall quilt, and the rest went in a storage tote. 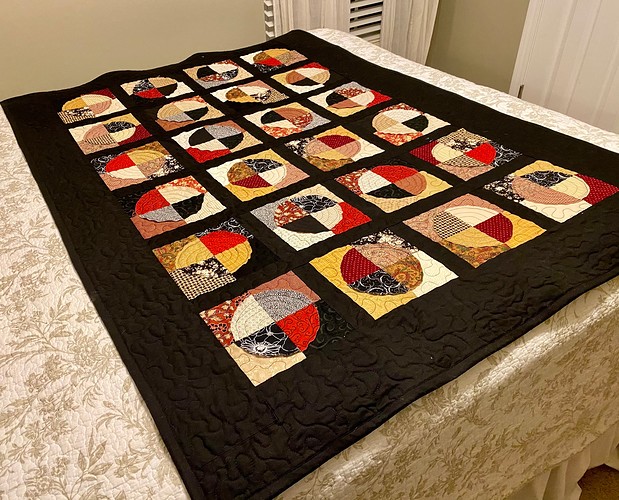 IMG_29021872×1512 1.04 MB
But with the inspiration of the 2021 Quiltalong by the lovely @Lynx2Lancer and @AudiobookLover, I decided to look through that tote, and bumped into these blocks again. Now that we’ve moved a couple of times, these particular blocks coordinate beautifully with our living room. They wouldn’t be big enough on their own to make a whole quilt top, but with sashing and a wide border, I could make a cozy lap quilt. 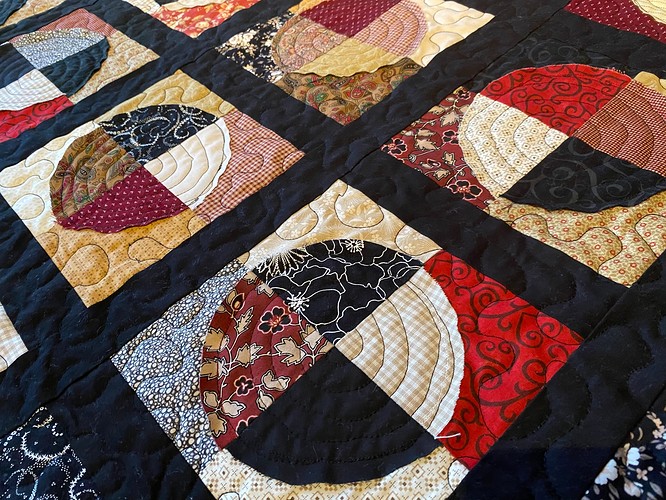 IMG_28492016×1512 1.15 MB
In order to preserve the raw edges of the circles, I quilted them with wonky spirals, and the rest of the body with an all over squiggly free motion doodle. 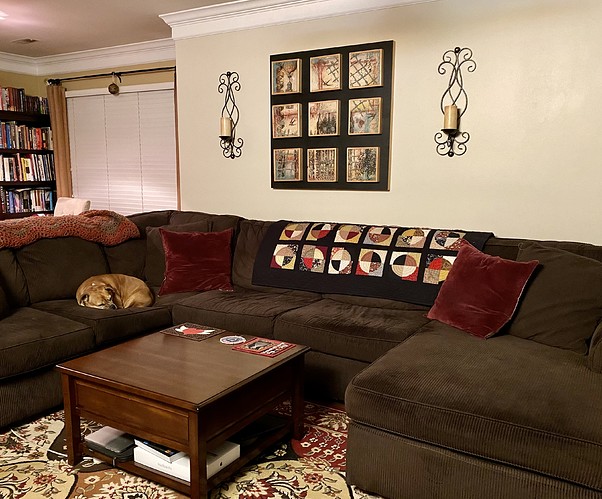 I can’t wait to see it in person (someday soon!)…you did a fantastic job…it is one of my favorite things you have put together…quilting and sewing and just being so creative with the layout…

Looks fabulous and goes well with doggo, I mean, your furniture…lol…adds a bright and warm spot to your home…

I hadn’t thought about it when I added the sashing, but it now also echoes the encaustic painting above the sofa, that we bought from a local artist. Each block of her painting is separated by a band of black background.

I did notice that detail…and both are geometric patterns that blend together in a pleasing way!

This complements your living space in every way. It definitely feels like it was purposely made for this

Yes, it matches your current living room perfectly! I love the freemotion quilting you did.

This turned out beautifully and coordinates perfectly!!

holding down the couch so it doesn’t float away.

That is too funny!! I’m going to start saying that about my Reggie!

Your quilt turned out so good! And it fits perfectly in your current space. I don’t know if I’d have the motivation to finish a 10 year old project. But you’re right, I had no desire to quilt but the Quiltalong is making me want to.

This is awesome!! I love the contrast of the wonky circles and the stippling. It really helps those circles pop.

Oh the joy of completing a long-awaited project. It looks awesome and your dog is adorable.

It really is just perfect in this room! I’m so glad that you rediscovered these blocks!

And extra obligatory shot with the doggo, holding down the couch so it doesn’t float away.

I used to say this exact thing about my kitties I had in my 20s and 30s!

So cozy and warm looking. And goes with the dog perfectly.

I’m impressed by just how well this works with your room. It’s as if you took the rug to the fabric store to make sure everything was well matched! Your freehand quilting looks really good! I’m glad you were able to breathe new life into these blocks.

Aw man, just love the far away shots of it. The quarter circles are amazing, all the colours so perfectly accent and compliment each other.

Wahoo! Your wonderful project is one of this week’s Featured Projects! Thanks for sharing it here with us!

That’s just beautiful! I love the stitching pattern squiggle things you did (I’m sure there’s a quilting term that I don’t know) that accent the organic feel of the circles.

It’s going to look better and better after use and washing to get those edges frayed.

This is so fabulous! It looks great.

Way to salvage and destash at the same time! The finished quilt looks perfect there.

These work perfectly in your living room. I had never heard of a quilt square that you leave the raw edges either. It has a really cool look to it.