Still experimenting with my cameo and the different ways I can accomplish the same goal, so today instead of HTV I did a freezer paper stencil cut on the Cameo, and acrylic paints with textile medium. As usual, the design is mine. This one I worked up in Photoshop off a quick sketch and imported to Studio as a PNG. Doing it that way really is so much easier. 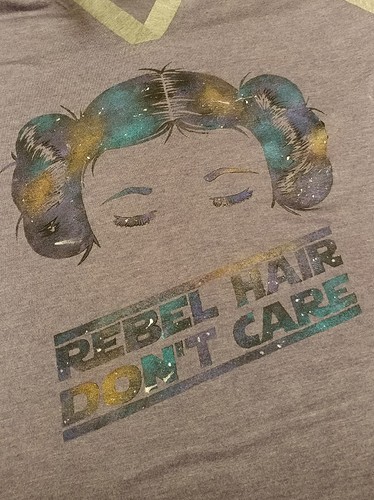 I found that this design was almost but not quite too complicated for the freezer paper stencil method, and I did get my black base color a little soupy so it bled into a couple of the finer details, but over all, I found cutting the stencil on the Cameo to be easier than I expected. It did hang up a little in some of the zigzaggy areas, but lucky for me, the bits it boobered were all in the negative space I didn’t use.

This turned out great! As I saw the thumbnail I had thought you’d cut some spacey vinyl, but the painting makes it even more impressive. Did you use transfer tape with the freezer paper and if so, how did it go? I’ve done freezer paper a couple times with my digital cutting machine, but before I knew about the transfer tape and I’m wondering how it releases, etc.

The videos I watched suggested not even trying to use transfer tape because it doesn’t release. So I didn’t with this one, which is why it was almost but not quite too complicated for the technique. Any more tiny bits to individually place in exactly the right spot with the help of tweezers and I may have given up.

That said, I DID watch one video where the person said don’t use transfer tape, but you CAN use leftover HTV carrier sheets. They have just enough tack to hold the pieces, and you can iron the freezer paper on BEFORE removing the sheet. Which is brilliant, and now I have to keep the carrier sheet next time I use HTV so I can try it.

Yes! I had been using tweezers to place the floaty bits and probably burning my fingers a bit! That’s very clever about the carrier sheet. THANKS!

This is amazing!! I’m in love. The white splatter makes it next level.

Love this so hard.

This is fabulous. I love the design and the way you painted it! You definitely wouldn’t have been able to find a transfer that cool!