I began to plan a recipe binder to keep all the recipes I love together in the kitchen, I always loved the idea of having my favourite recipes in paper form.

Of course I always loved those old recipe boxes, but I thought a binder would be a smarter choice. However, I decided to change my idea and just try a recipe box first. I haven’t seen any recipe boxes around, even on the second hand store, so I knew I had to make my own, oh no, that’s torture XD

I found a large box (maybe larger than I actually need) that was covered in, um, less than pretty fake fur, which I managed to rip off. The hinges were on the “normal” side I guess, but I wanted it to open on the long side, so I moved them over to the opposite of side once the box was covered in whatever I wanted it to be covered in.

After a lot of back and forth about how to cover the box (paint, fabric, scrapbook paper, tissue paper and so on) I found some pretty tissues at a store that I thought could fit my kitchen, dark blue with gold-ish geometric shapes. At least I do like the end result. 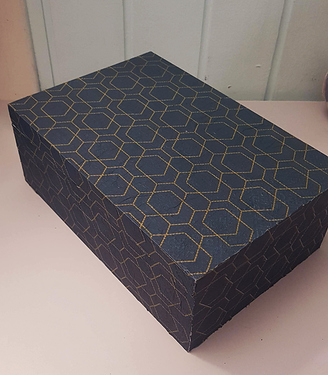 And then of course I needed index cards for the different categories, and seeing as I couldn’t even find a recipe box I knew I also had to make those, so I found the super old scrapbook paper that I don’t even know how I got and made some. No template used.

The recipe cards are made out of watercolour paper GASP, I just didn’t want to look for paper that was as thick as I wanted, but not too costly. At least I can paint the cards if I want to 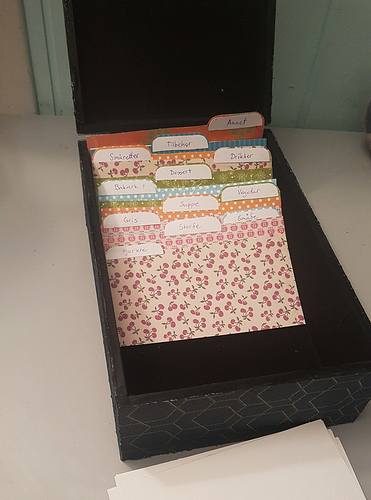 What a darling recipe card box! It’s awesome that you made your own cards to fit inside. THey are stunning, and would bring a smile to anyone’s face in search of a recipe.

Ooooh, what a good idea! It looks adorable. I’ve been getting into cooking more and keep printing off recipes. This would be an excellent way to store them!

Love the blue and gold geometric patterned paper you selected for your recipe box (so much better than fur, I think?). Yay for staying organized in the kitchen

Oh so pretty!
I hope you put it to good use.
I’ve tried so many times to organize my recipes but never succeeded.

I did start of organising them digitally, and it worked well, but i prefer to have them physically