Testing the flute after gluing.

This is something I did some time ago and thought I had more pictures…I guess not. Anyway, in the video you can easily see where I had glued the flute together. This flute has been through hell. It’s about 22 years old, and it’s been a teething toy, stepped on, and the finish was well worn.

The end of the flute was busted so much, that it could have easily been in 8 to 10 slivers of wood, but it still, mostly, held together. What I did first was I glued each of the slivers together and tied it with several pieces of leather cord (that can be seen in the video).

Then, the following are some images after it was finished being repaired. 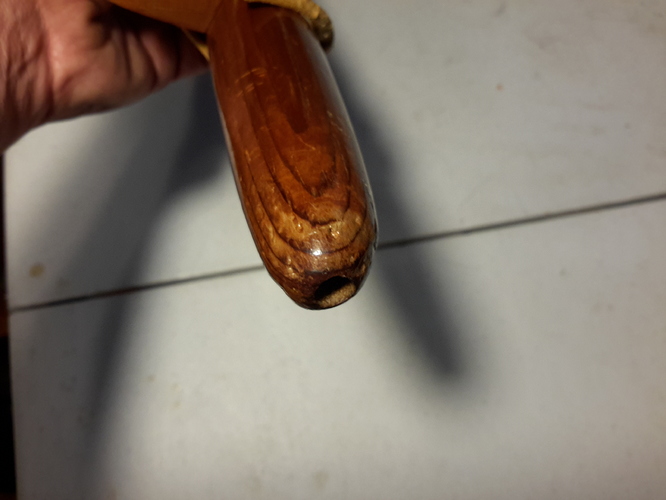 Here is the teething toy part of the flute. I sanded it down as much as I possibly could. Then rubbed linseed oil over the whole thing. 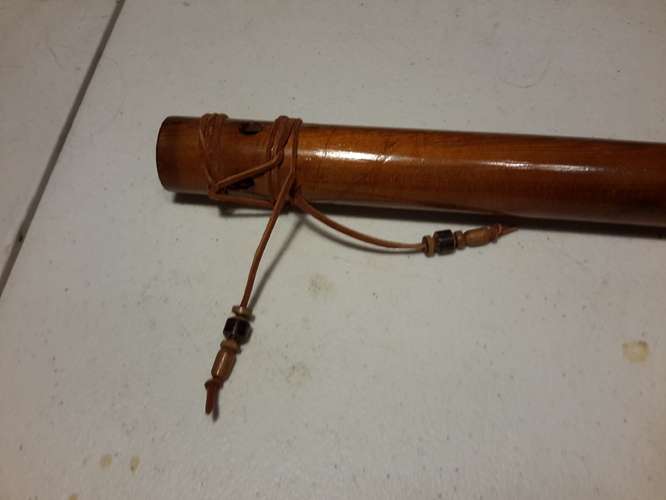 And here is a piece of leather cord I used as extra protection for the busted end. The beads I made out of some Russian olive my dad grew. 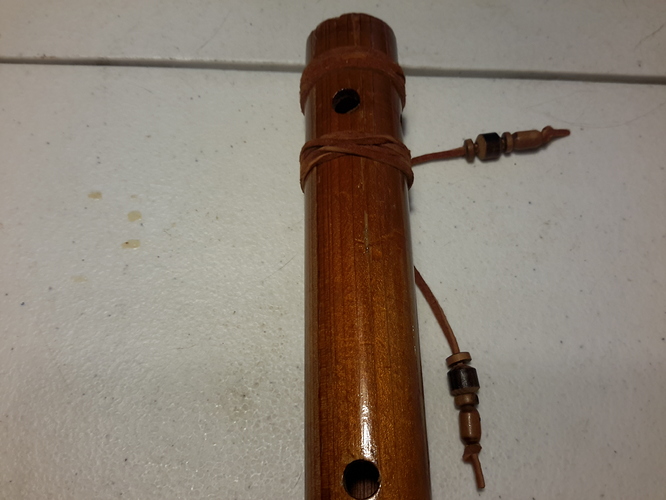 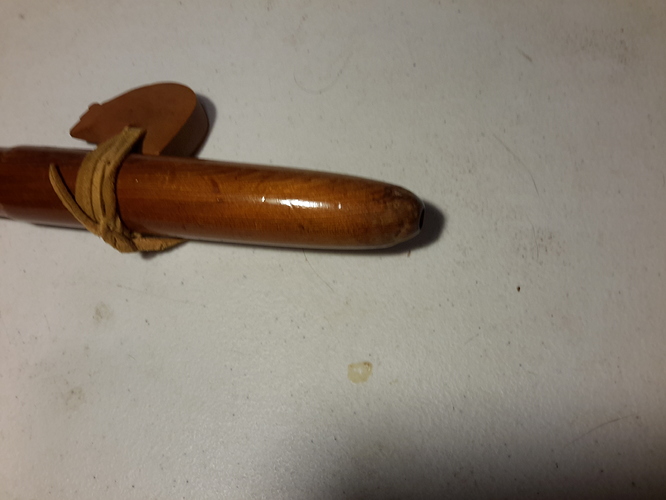 And a few more pictures.

Ok, now the story about this flute.

Around 1998 I found an advertisement in a magazine for this flute from a Cherokee in Oregon, and I wrote to them saying I’d like to have one, but I just didn’t have the money for it. Regardless, they let me make two payments of 25 each month, and let me buy it for only 50 instead of the 75. Later on, I bought a second from them for 25 for three months. Which they let me pay less for again. Needless to say, a few years later when I was working I tried my darnedest to find them to send them the rest for my thanking them, but I could never find them.

Well, throughout 2005 and 2010, I had traveled to many of my nieces’ schools playing the flutes for the kids. Heck, this one time, one of my nieces had to save me by getting a blasted spider out of the other one, heh. anyway, there had to have been at most if not least 2000 kids that called me uncle, Hah! Many still call me uncle to this day, and even the thought of it still makes me smile.

Around 2010, my mind began getting bad and I even had hard times talking and thinking…I had decided to stop doing that. There are so many kids, adults now, out there that remember uncle, and they remember the flutes…and they remember me playing them with my nose, HAHAHA!

Neat story, your repair is flawless - it looks good as new!

You and your flutes have a wonderful history. Maybe some of those kids (now adults) will meander through here and recall the joy that your music brought.

Maybe some of those kids (now adults) will meander through here and recall the joy that your music brought.

Oh, many of those kids have memories of uncle. Heh. I remember this one concert, and I’m certain there are a few parents out there that hate my guts for that, but the kids loved every moment of it and still talk about it. During this one song the whole stage lit up with, “This little light of mine… SHUT UP UP UNCLE. We’re gonna let it shine…SHUT UP UNCLE”. it was great, HAH!

Nice work! the beads you made are lovely too

The fact that they reduced the price and let you pay in payments is awesome, it shows that they wanted people to play them. And it sucks that you stopped, but at least you are still remembered

And the fact that you were able to repair it is awesome, especially because it has such great memories.

Wow! You play amazingly well, with such feeling! Your repair must have gone well…the flute still makes beautiful music!

Ought to search up “cat with seven toes” on youtube and facebook. On facebook, one of my better ones is “Home on the Range” (yes, I’m a kansan,

), and on youtube I’ve got “Hark the Herald” that’s pretty good, too. I have lost a lot of my creativity, but I’m trying to get back to playing again.