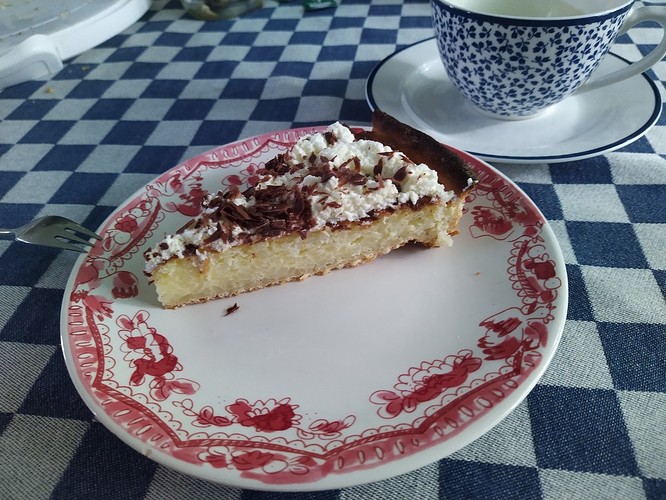 Vlaai is a type of tart popular in the south-east part of the Netherlands, the east of Belgium and I think also just across the border in Germany where it’s known as Fladen. Not sure if they are popular elsewhere in Germany but I can confirm I’ve eaten it in Aachen. Vlaai typically has a yeast dough crust and is then filled with fruit or rice pudding. I made one filled with rice pudding today.

The recipe in my notebook is in grams and ml, but I’ve included cups/spoons when I know what the equivalent is.

Ingredients for the crust:

Ingredients for the filling:

Make rice pudding from the pudding rice, the milk, 100 gr of the sugar and the vanille flavour. Personally I prefer replacing some of the sugar with vanilla flavoured sugar (2 8 gr bags) but you can also use vanilla essence or even a pod. Follow the instructions on the box of the rice you use. I put the rice, milk, sugar and vanilla together when it’s all still cold, then bring to the boil and boil for 12 minutes. If you’ve never made rice pudding before, it’s very easy but remember to use a pot with a heavy bottom and keep stirring! I use my stockpot because when you bring it to the boil, milk can boil over quickly. As long as you don’t burn it or let it boil over, you’re going to be fine. Rice pudding is easy to make. When it’s done, let it cool to room temperature. 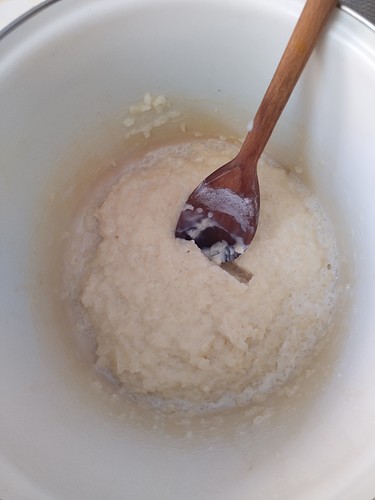 When the dough for the curst is done proofing, dust your workspace with flour and roll it out. Put the dough over the greased tart pan. Don’t cut down the sides yet, wait until it’s filled! The filling is heavy and will pull down the dough a bit.

Take the 2 egg yolks and stir them into the rice pudding.

Take the 2 egg whites and beat them with the remaining 25 gr of sugar and a pinch of salt until you get stiff peaks. This takes a few minutes in the KitchenAid and approximately a century by hand. Spoon the egg whites into the rice pudding and mix them in.

Spoon the filling into the crust. Leave to rest for about 15 minutes. I usually turn on the oven at this point (220 C) and I just put the pan in the oven when the oven is hot. I cut down the sides just before I put it in the oven. If you have leftover dough, vlaai with fruit fillings often have a lattice top. Tarts filled with rice pudding traditionally don’t. I used the leftovers to make a few mini tarts with lemon curd filling. 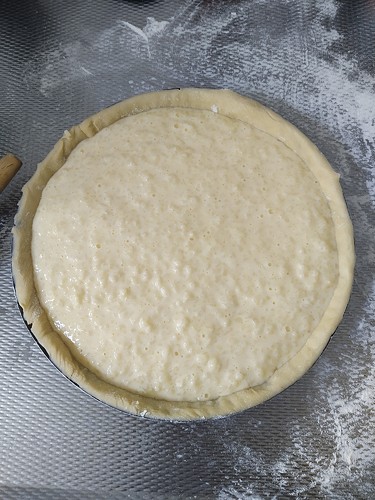 Put the vlaai in the oven for about 25 minutes. It should be just slightly less dark than my crust was! It wasn’t burnt but it would have been if I had left it in a minute longer. 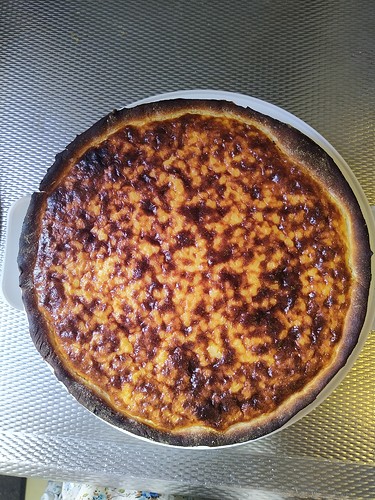 Leave to cool in the pan for about half an hour, then take out and cool completely on a cooling rack. If you take it out too early it may break.

When it’s completely cold, decorate with icing sugar or cream. I used a 250 gr pack of whipping cream and whipped it up with one tablespoon of sugar. I spooned it over the tart and grated some chocolate on top. I never buy any kind of expensive chocolate decorations, I just buy a bar of a type of chocolate I like (this is Tony’s Chocolonely’s dark milk bar) and use a cheese grater to shave off chocolate. Make sure the chocolate is cold before you try this! Mine was straight from the fridge. 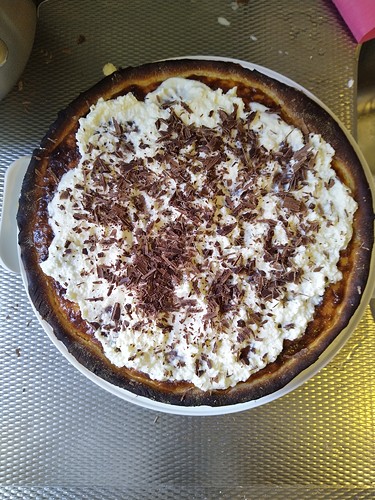 You can make the decoration as nice as you like. It looks like this at one of the best traditional bakeries in my city: Rijstevlaai

O, yummy!
I’ll definitely have to try this - have never heard of this cake before. Thanks for sharing the recipe!

This looks so good! I know my husband would love it.

If you ever go shopping in Maastricht or Venlo, or even Nijmegen, you can certainly eat it there! Or just bake your own of course, it’s not difficult

I can’t wait until I can go shopping in Germany again. German groceries stores have so much more baking and canning products than our stores do.

Thanks for the cooking lesson!

I think yours looks so much better because it is not all covered in the chocolate!

Now that is a dessert worth baking!

Tell me what you need!
We should do a grocery swap

When we came back from Texel we brought a bag full of hagelslag with us.

And… we have Texel sheep over here.

Looks really good!
I really like this taart. It was a staple on our table with every birthday in our childhood since my brother loved it very much. Some sportsmen even take it with them to eat during cycling!
It doesn’t look that difficult! Perhaps I will try this soon!

No, it’s not that difficult at all, and once you know how to make the crust, you can make any type of vlaai!
I had no idea it was taken on long cycling trips, but it makes sense, it’s very dense and filling!

Congratulations! This has been selected as one of this week’s featured projects!

Congrats! I am so happy to see this everyday in the Featured Projects even if it makes my mouth water! I am going to make it with my sister at her house since she loves to cook dessert!

LooKs divine! My husband’s nana had a similar recipe for ride pudding and early on in our dating I decided to make it. It was hours of stirring and then you bake it, seriously it took me all day. I went to remove it from the oven and the handles of my baking dish popped right off! The whole rice pudding casserole came crashing to the floor! I was heartbroken and I haven’t made it again in 25 years!