This afghan has been over 2 years in the making! I started it in September 2017, as a way to stash bust. I had 6 skeins of Red Heart Boutique Unforgettable in Dragonfly and thought I might be able to make a nice little thrown with it. I had already made a Virus Shawl, and had seen a few patterns floating around for the Virus Blanket version. The woman who wrote the blanket pattern also has a video of how to make it on Youtube, so I just worked from that rather than buy the PDF. 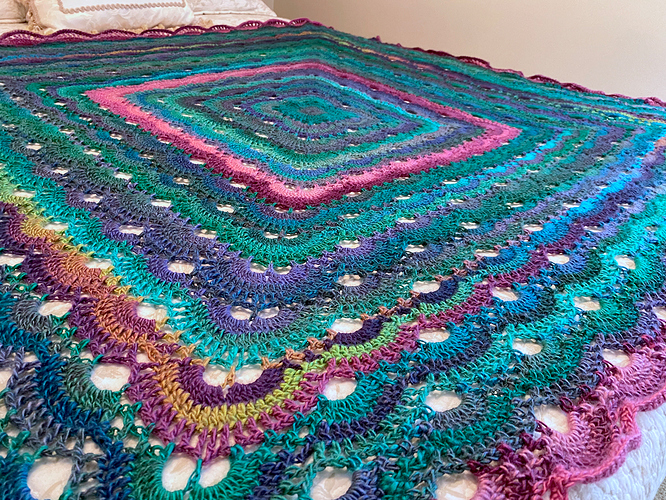 I started with the Dragonfly, planning to do the whole throw with it, but after 4 rounds of the 4 row pattern, I felt it was a bit dull, so I dug through my stash and found I had 1 full and 1 partial skein of Petunia, so I threw in a row of that. Here it is laid out on a queen sized bed. 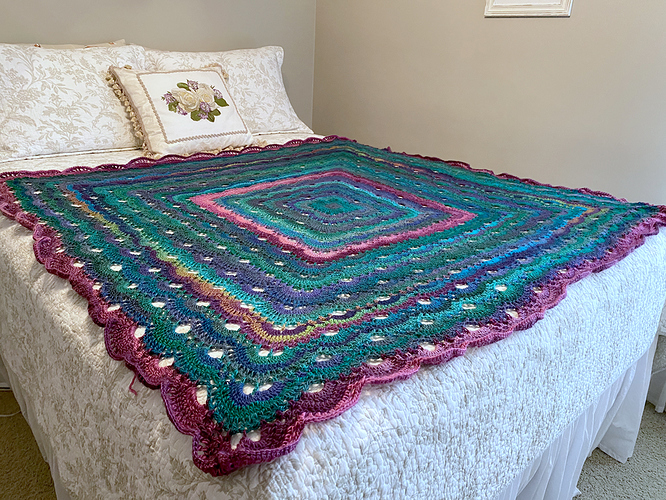 This was one of those projects that got picked up and put down often, when other things came up. So it was well over a year and a half into making it that I bumped into a skein of Gossamer on clearance at Joann’s, and threw that into the mix too. 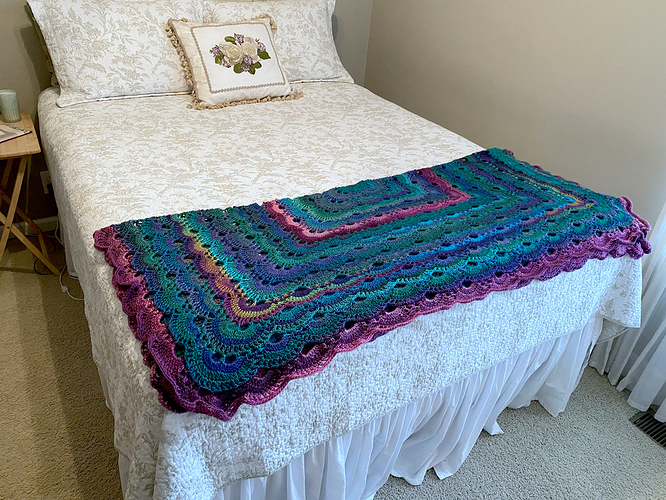 In the end, I think it took either 5 or 6 skeins of Dragonfly (the main blue-green), 1.5 skeins of Petunia (pink-purple-burgundy), and 1 of Gossamer (the more rainbow band in the middle, that contains blue, green, purple, pink, gold and lime). I haven’t decided exactly what to do with it yet, but it might go to a friend in Japan who was recently married. 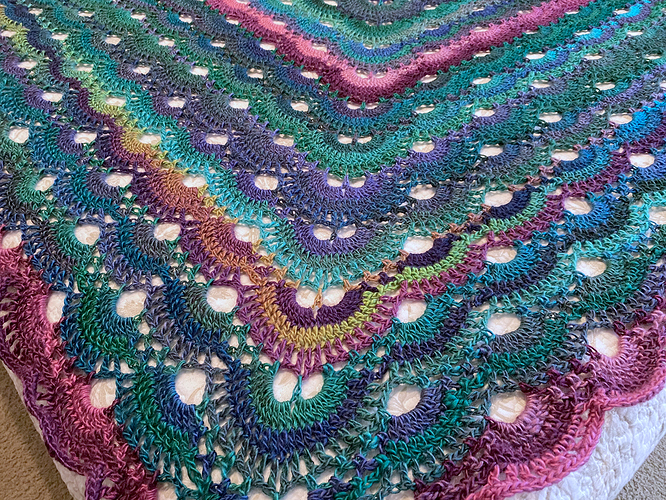 you finished it!! Yay, it looks beautiful of course

How pretty! I love the way you used several different yarns with multiple colors and it all looks so good together!

This is gorgeous! I love the extra pop of color you threw in to liven it up. The pattern is really beautiful too!

So beautiful … another pattern I want to check out.

You always combine the most wonderful colors! This is a really beautiful use of that popular virus shawl pattern…

You always combine the most wonderful colors!

I agree! You have a keen eye for really pretty color combinations and this is no exception. I’m pleased for you that it is now a Finished Project!

This is incredibly beautiful! It looks like 2 years worth of work!

I love the colours, blue/greens are my faves at the moment.

This is so pretty. I love the pattern and the colors you chose.

this is beautiful! I love all the colors!

This is stunning!!! The color and the design are both beautiful. I would stare at it all day. Gorgeous!

It’s really beautiful and I love how all the colors add to the excitement.

Way to go you on finally finishing that WIP!

It’s so very pretty! I love the colors!!