Earlier in the year I did three small embroideries of mushrooms on some very nice Belgian linen. Originally, I was going to sew them onto some linen towels but decided that it was too impractical and might get ruined by use.

Instead, I decided a couple of notebook covers might be a more functional use, plus I can see my mushrooms more often!

The base of the cover is rough linen and it is lined with the same batik fabric that outlines the mushrooms. I used a pattern that I drew up a few years ago to fit a composition notebook, so it was truly very easy to make. I even added a selvage piece bookmark, which was a royal pain to make until I found the coolest way to turn such a tiny tube using a bobby pin! Genius! 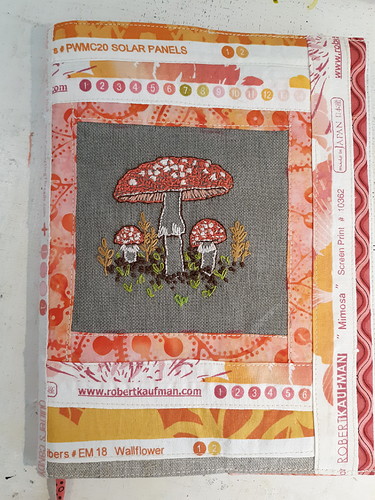 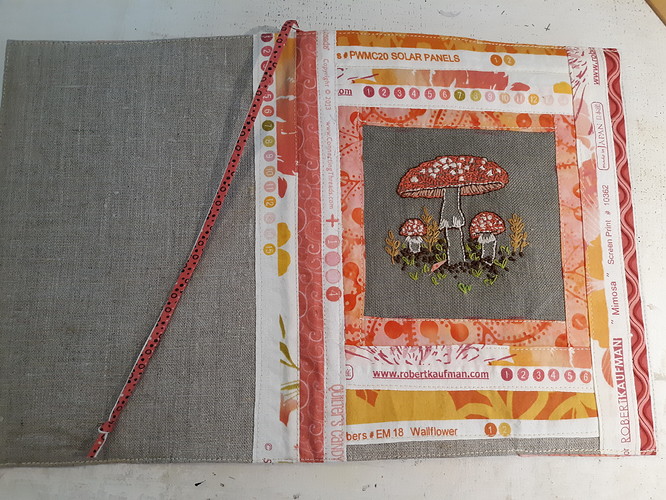 Live the colors! It is so calming.

Thanks…oddly, have no idea where those selvages came from because I don’t remember using the fabrics. I think they might have been used in swaps to make Japanese knot bags. They are not normally colors I would pick, but yes, I find them soothing and will probably use the notebook to record random thoughts during my afternoon tea break.

That is so pretty. The salvage pieces look amazing. I never would have thought to use those.

That is so lovely! The linen is such a mushroomy shade, love the bright, hot colours in contrast. And that batik? Woo, gorgeous!

lol I save everything!

I sort of laughed when I read the words on the ones I picked…seemed appropriate…“solar panels”, “mimosa”, “wallflower”…and the color dots for screenprinting the fabrics always make me smile…

I love the color dots and tens to save them too, but never think of anyway to use them. This is wonderful.and the colors are fun.

This is wonderful! So glad you decided to do this with your embroidered mushroom…now you can admire it all the time and preserve its loveliness. I like your addition of the bookmark…so handy!

Oh, my. This is to die for. The color and texture combinations are lovely and I adore the mushroom image.

Love the contrast with the linen!

This is beautiful!! I love the colour combo, the linen and the embroidery!!

What’s the trick with the Bobby pin?

Love this method of turning these tiny tubes!!

This is so darling!

If you have a serger there is a really easy way to sew & turn little tubes. Check out 10:00 on this video.

This is just so gorgeous

I love everything about it. That linen is lovely and the mushroom is so amazing!!! What a wonderful project

Your wondrous craft is one of this week’s Featured Projects!

This is stunning! I love notebooks, they are my weakness. The embroidery is stunning and I adore that you used the selvage! Too cool.