I decided last minute to make an advent calendar for my niece and grand niece.

My birthday is at the beginning of December, and every year of my life my parents have given me an advent calendar. I have kept almost all of them, from the 80s Suzie’s Zoo when I was 6 or 7 to the German antiques I was given as an adult. I pick a couple to put out each year. I love them. They are one of my favorite things about the Christmas season. I even have one from a C-ster swap wayyy back in the day.

But I have only made a couple. I thought about making a fabric one with pockets and a little character to move from day to day, but decided I will design a cut and sew one for next year. But then I saw a wooden snowflake ornament at the fabric store, and remembered the toilet paper roll trees I have seen people do, and the two things combined in my brain. 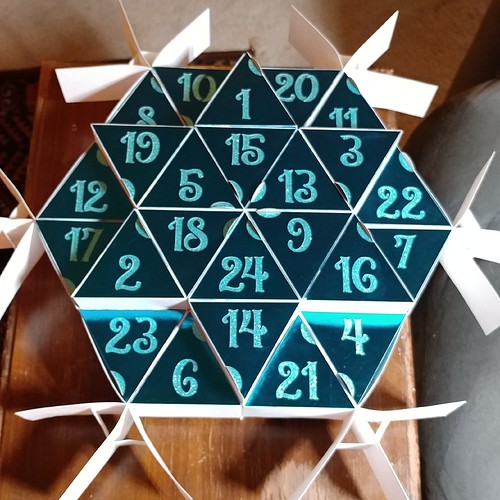 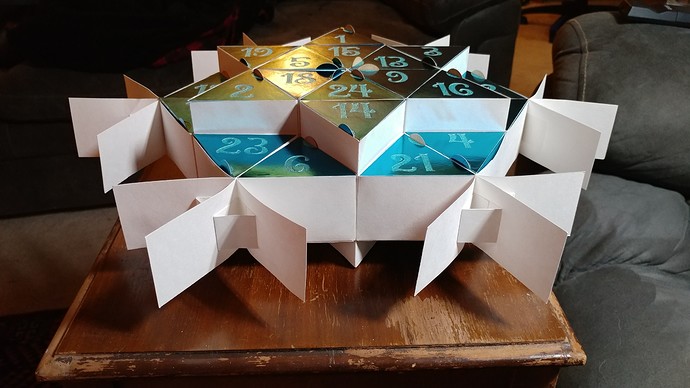 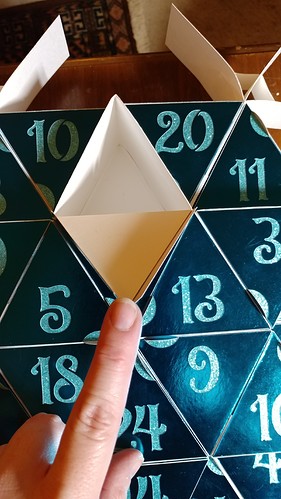 It turned out way better than I hoped. It’s made from poster board and cardstock. The cells are triangles 3" on a side, with 12 that are 4" deep and 12 that are 2" deep. Tomorrow I will write up a tutorial and get the cut files for the doors formated. But no one in my house QUITE matches my glee, so I needed to post it right away. Lol

ETA:
OK, FINALLY.
First, here is an SVG cut file
And a template for the doors, because the orientation of the tabs has been carefully planned.

If you choose to change the numbers around, for example to be orderly rather than scattered, you’ll need to actually move the numbers from door to door, rather than simply rearranging the doors themselves. Additionally, this has been carefully sized to fit exactly as directed. The tabbed triangles fit snuggly inside the cells. Minute adjustments can be made if they do not fit quite right, but even a milimeter too large or small will cause problems. If you choose to make your calendar larger or smaller, it may take some trial and error to get these resized correctly.

Materials:
Posterboard or coverstock
Decorative cardstock in at least 2 contrasting colors
Adhesive of choice (a liquid glue does warp the paper somewhat but once dry provides significant structural integrity to the piece.)
Cutting implements

The cut file “pages” are as follows:

This is darling! And I love the snowflake-yness of it!

And I LOVE the Star of David in the middle.

This is so festive and clever just on its own, but in the context of your memories and family it’s The Best!

Oh, wow! Love it so much! I don’t know why the triangular doors and the varying depth of the boxes excite me so much, but they do. How cool! Can’t wait to see the how-to. (And happy early birthday!)

This is the coolest!

Wow, this is really spectacular. I can’t imagine all the detailed work that must have gone into getting all the angles just right. I love it.

So pretty ! And what a lovely birthday tradition!

Your wonderful project is one of this week’s Featured Projects! Thanks for sharing it here with us!

OK, I added the cut file and instructions, but I am really not sure if they make sense, and I got a new phone yesterday so I’ll have to wait until I get home where my old phone is, to include the in-process pics I took, which might illustrate it better.