My daughter @geekybookworm has played recreational soccer for most of her life. Obviously, last season was abruptly ended before it could begin (thanks, covid) and it was most likely going to be her last rec season before she aged out. (This depends on if the club is able to make another season in her age group with with players they have. Or, she could decide to move up to the U18 age group, but she’s a little worried and may not.) Anyway, since she’s mostly finished her recreational soccer, I decided to go through her shirt jerseys and and make her the quilt I told her I was going to. If she gets more seasons, I can hand sew those jerseys to the back of this or make pillowcases.

So, here it is laying on her bed. I have blurred out any identifying logos for safety.

As you can see, it’s really big! There is quit a bit of jersey between the bed and the wall.

I used the same soccer fabric for the backing: 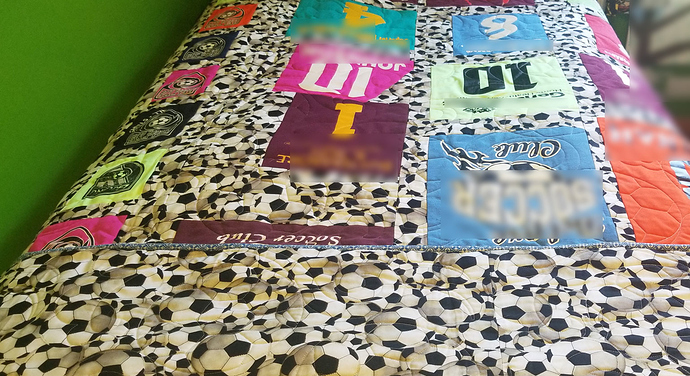 You can see my one row that is quite different from the others. There were a few season where the club crest was tiny on the front of the jerseys and that is what this row is from. Then the side you don’t see is like the other rows.

I received back the quilt from my LQS about a month ago. The quilting is cool, but doesn’t stand out a lot because of the busy fabric. Here is a close up of part of it. It’s a soccer ball and what you don’t see is some “fiery” parts around the ball. 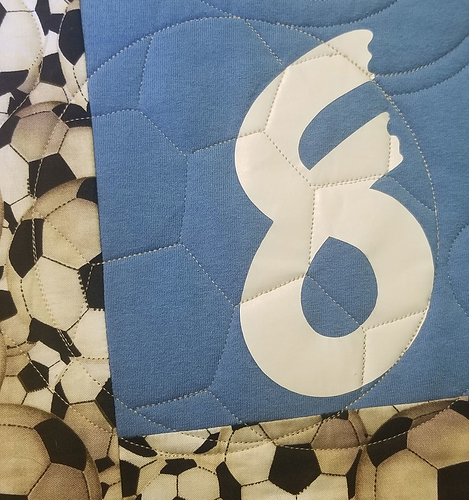 I let geekybookworm choose what she wanted for the binding fabric. She chose this one. Even though it is busy on busy, she liked it, and I think it works well! I finally finished hand sewing the back of the binding at midnight last night!

This is the first t-shirt quilt I’d ever made and I think it turned out great! I will be making a soccer quilt for my son and my husband who has coached both kiddos for many many years.

This is awesome and wow! Sewing jersey.

It came out fantastic! Like cozying up with memories!

Turned out really wonderful…I know it must have been a bit of work fitting them all together…the layout is really interesting and showcases the important pieces…the t-shirts. I do love that soccer fabric…it is busy but it fits the theme and the black and white is perfect for the bright colored T’s!

I think the binding is also nice…if you are going to go for all that pattern, go all the way!

Can’t wait to see the ones you make for your son and hubby…same background fabric?

Thanks so much! Yes, they will have at least the same soccer fabric for the front. I have to wait a while on those as there will be more seasons to go. The club is still pushing for a season this season, but we’ve decided to back out for safety. We’ll see if they continue with the go-ahead this season or not. Hopefully the subsequent season (spring 2021) we can be back and playing!

Great job! You nailed it!

It adds quite a bit of weight on top of my other three blankets. But it really is quite comfy. Thank You, @Lynx2Lancer!!!