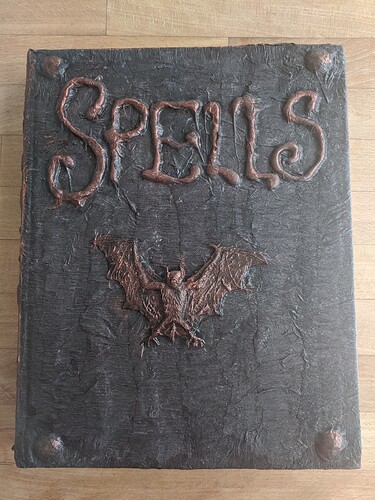 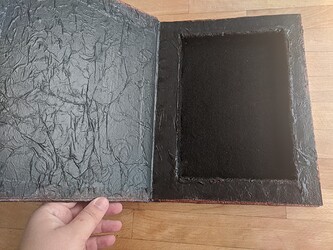 I created this for @Bunny1kenobi in the Summer 2022 Book Swap using the tutorial from Better After and my recent experience making secret books.

I started with a cookbook that I purchased from Goodwill. I had purchased a different college-course book, but it turned out I liked it too much to mangle it. Good thing I purchased two options.

I started by wrapping the front cover and the back cover with saran wrap and taping it. I used matte mod podge to adhere the pages of the book together by brushing the goop on the edge. This is why the front and back cover were saran-wrapped, so the pages don’t stick to the covers. Weigh down your book while the mod podge cures overnight. The next morning, brush on mod podge again and let it cure throughout the day.
Unfortunately I didn’t take a picture of the wrapped book, but I did take a photo of it under the weight with my tuxie Manx loverboy Arlo (adopt a shelter kitty + FIV cats are awesome). 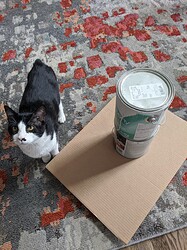 I opened the book and measured about an inch in from the spine and the other three sides to make a rectangular box. My friend told me she read that if you drill out the corners first, you would be left with a cleaner cut. Lucky for me, the cookbook was extra bendy and did not mind having the front and back cover bent together so I could drill through the meat of the book. If you attempt this, take pauses so you don’t catch your book on fire. It did not engulf itself in flames for me, but it did start to smoke so… you know… safety first. 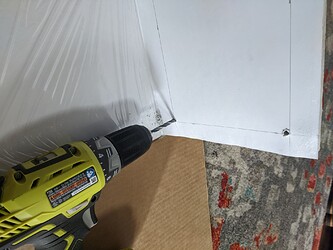 Next came the really fun and not-at-all-hand-aching part of using a utility knife to run along the rectangle fully through the book. I’m sure there had to have been some way that was infinitely easier and probably involved some other power tool, but I did not think of it. FIRE BAD, KNIFE CUT. 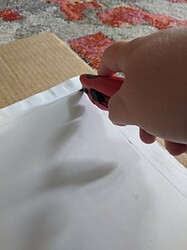 The Better After tutorial says to use paper towels, I think, to adhere to the book. I saw that some people that made the book on Pinterest said to use napkins. I was going to use black tissue paper, but my Halloween stash spoke to me and said “black party streamer”. It already has texture and I have a bunch of it! The best idea would have been to complete the inner portion of the book before working on the outside, but I didn’t do that. My suggestion is to Mod-Podge the edges of the front and back covers and adhere the party streamer. Then you can either use some cardstock (which probably would have been easier) or black tissue paper to cover the insides of the covers. I painted the inside front cover then adhered black tissue paper to it using mod podge again. At this point you will want to glue the meat of the book (inner page chunk) to the solid back of the book. Glue the inner portion of the rectangle as well, Weigh it down and leave it to dry. I used an 8.5x11 inch piece of black felt to stuff into the cut-out rectangle and adhere it, then cut the edges back using my super-sharp fabric scissors.
In this photo you can see the felt in place, but how I had not finished the other parts of the book interior. If you’re planning on making this, finish the interior first before adding the felt. 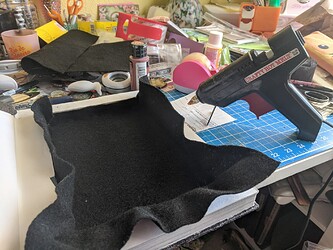 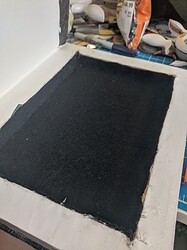 Let’s say at this point that the inner portion is finished. I would suggest the next part to cover with party streamer is the spine of the book. I used both my fingers and a bone folder to really get into the crease. I had already covered the back of the book at this point, but I suggest starting with the spine. After I covered the spine, I hot glued the word “Spells” on it then later covered and painted that part, which I explain further down. 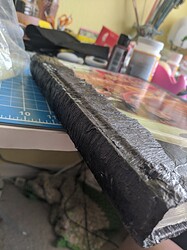 I used the matte mod-podge and globbed it on the back of the book then laid vertical rows of party streamer that had been cut a little longer than the book to allow for decorative creasing. I noticed that I could see the seams between each stripe, so I cut a long piece of streamer, pulled a small strip off both sides so it was not completely straight and covered the seams. When I worked on the front, I started on the left of the book, frayed the left side of the streamer and laid it down one over the top of the other. This took out the extra step of adding more streamer to cover seams. I let the steamers dry, then added another layer of mod-podge over them to seal them and let it dry again. Before adding streamers to the front cover, I used a Sharpie to draw a straight edge, then used my mediocre lettering skills to write out “Spells”. After that, I traced the the letters using a hot glue gun. It did not matter if it was perfect, which was great because my hand was shaky from squeezing the trigger and trying to make it look nice. In the Better After tutorial, the author used tacks on the front. No need! I used some decorate jewels and a hot glue gun. 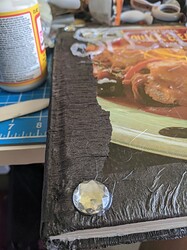 Now I covered the front of the book including the gems and the hot glue letters. Those required pressing in with a bone folder and sometimes adding extra chunks of party streamer if it tore. Again I let it dry then went over it with mod-podge to seal it. I adhered a toy black bat to the front, but it was too pristine. I hot glued underneath the bat, then would pull out the glue “hairs” and cover the bat until it looked like spiders had been crawling on it. I then used Folk Art Multi Purpose acrylic paint in Copper along with a soft bristle toothbrush to lightly paint the “Spells” letters, the bat, and the covered gems along with a few brushes here and there on the book. 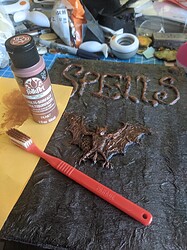 At this point I thought I was finished and just had to let the paint dry, but! The chunk of pages looked white! Oh, that would not do at all. I used the toothbrush again to paint them the copper color. Now that I’m thinking about it, it may have looked better if I used a watered-down brown, but it is what it is. 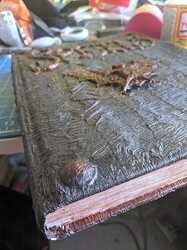 Now the book is finished and can be wrapped up and sent in the mail! 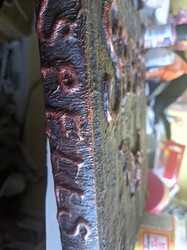 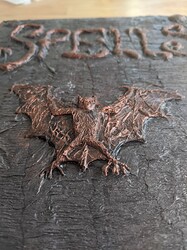 I hope you enjoyed reading my wordy explanation and will make your own book, I’d love to see it!

Great book, and love the tutorial!

Amazing! You did such an awesome job on this! My son keeps trying to steal it!

This is really cool!

@steiconi @Bunny1kenobi @Lynx2Lancer Thank you! It was the drying part that took the longest. I’m pretty sure I could put it together easier now. I was thinking it would be cool to put a silk purple ribbon beaded bookmark in it, but there was zero time left for me to think about it, design it, and craft it.

Wow, impressive! I love the textured effects you managed to get. Very cool; looks nothing like a cookbook now!

WOW! What an amazing and spooky transformation!

This is the coolest spell book ever! Awesome project. I love this and I’m sure Bunny loves it too.

Okay, this is pretty darn awesome.

Super cool! Thanks for showing us how you did it!

I honestly thought it was one of those boxes made to look like a box. This is a million times cooler!

This is amazing! It looks fantastic

@gozer I have one of those book boxes! I thought about using it, but then decided to go with the original tutorial.

I’m sure Bunny loves it too.

Indeed, she does!! @toadiscrafty keeps trying to steal it, too!!

Congrats! Your fantastic work is one of this week’s Featured Project!