I use my Instant Pot to make a lot of yogurt, and so I have a lot of the plastic bottles from the brand of milk I use. They’re made of #7 plastic, which isn’t easily recycled, so I thought I could reuse them. They come covered in a plastic wrapper, and when it’s removed, the bottle underneath is a free of any stickers or print, making it the perfect thing to use in a crafty project!

Or, so I thought…

What I thought would be a quick little project took me much longer than I planned. I tried to use my regular scissors, but they were too long, so I resorted to a pair of kids’ scissors and a utility knife. Fortunately, my fingers remain intact.

The bottle has curved grooves that encircle it, and I thought that if I followed along the ridge-line they’d be the right size to make the flaps. It turns out that the line I chose was too short, but the next line up was too long. So, I had to do some fussing around to get them to be the right size.

Another issue that I hadn’t anticipated was that the ridges would make it a challenge to fold the flaps inward. I was able to get the shorter flaps to fold pretty well, but the longer flaps needed more coaxing.

I planned to use my Kam snaps pliers to attach the snaps, but the throat of the pliers was too short to reach one of the snaps the way I had it positioned, so I cut out a curved notch so that the pliers could reach. I could have trimmed that inner flap way down, but the length of it does help to keep the shorter flaps closed, so the notches work, and I kind of like the look. 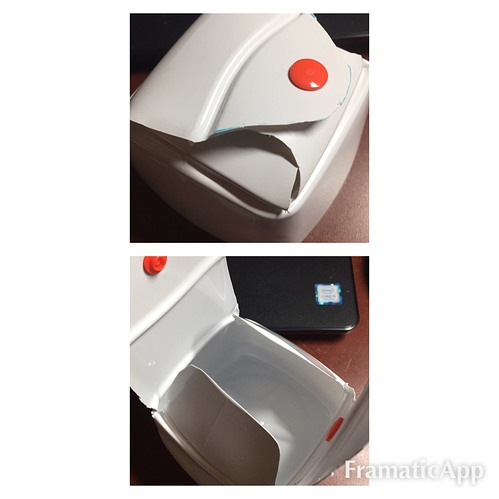 It turned out to be a fairly sturdy little box. I do need to find a better way to cut them so that the edges aren’t as ragged, so if anyone has any suggestions for that, or any other improvements, I’d love to hear them!

I don’t know about better way to cut, but I bet if you took a metal nail file to those edges it would buff down any sharpness.

Great idea. It’s nice that they are square, you could fill a whole drawer with those to organize craft supplies.

I wonder if a heat gun would melt the edges enough to smooth them out. You’d have to be careful with the heat so as not to get too melty, I imagine. Might want to do that before applying a kam snap to prevent it from melting too.

I wonder about using a stencil cutter - they’re pretty much a wood burning tool. They would off gas bad stuff which is not great and certainly not good to breathe.

I love you hugging the planet!