Finally done! I had to make an edition of 25 prints for a swap. But I don’t have a press, so each one was printed using a barren. + About 5 more in case of disasters.

Disclaimer : I hope this doesn’t offend anyone’s religious beliefs. This is a personal statement of my opinions.

The print shows an Irish round tower with small church. In medieval times monks lived in huts and worked and worshipped in locations like these. They made the beautiful illuminated medieval manuscripts. The tower is wrapped in an octopus. I am trying to represent the stranglehold that the Catholic church gained and retained, (until the last 20 years) in my country. The octopus is reaching out to symbolise how the church spread from these places of learning.

I’ve added gold accents, the light in the eye of the monster (that was the theme of the swap) and in one window, where perhaps a solitary monk is working, the gold is also to echo the gold used in the manuscripts. 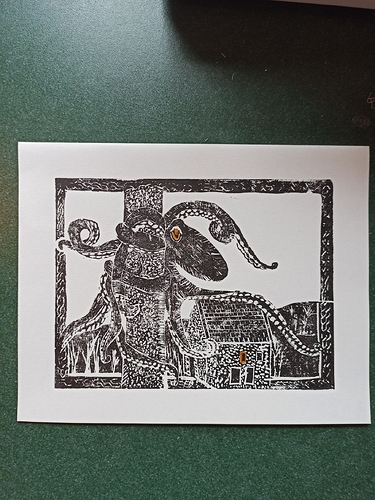 It turned out fantastic! So many textures to it, and the gold accent is just the right touch. Great job!

Brilliant, Edel! I my only moral objection is the maligning of the poor octopus - it’s bad enough to be so smart and yet so delicious, without having to be human shorthand for ‘grasping repression.’ Both the Soviets and the Americans used to describe the other as an octopus.

I stand with the cephalopods!

I know! I kinda felt bad about that too.

So to make it up to them, I’ve called our SCA village, tuatha de octhapas airgid which means the village of the silver octopus-it’s going to be on all our garb for the next while.

WOW! This is amazing.

Whoa. Just… YOWZA! This is so cool, Edel! The symbolism, the execution, the details. Perfecto!

Beautiful job my Friend. The prints are amazing, and the gold accents are wonderful.

Beautiful! (and I’m also glad of the close-up, as from looking at the multi-pictures on my phone I was convinced the print was of a ram…)

I also saw a ram in the smaller images!