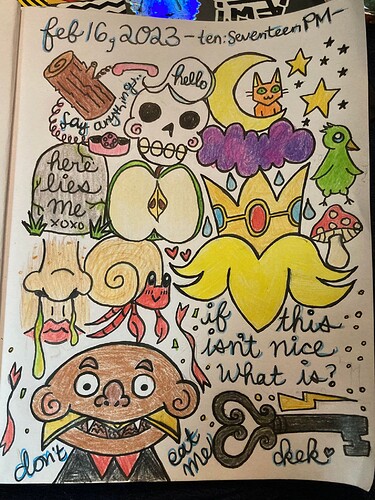 So, this semester of college, I’m taking a printmaking class. We have to keep a sketchbook journal and our first assignment was to do a Stream of Consciousness journal entry, but with drawings. Just let it flow, one thing to the next. At some point we needed to add a question. We could use any media we wanted, it just had to be in our journal.

Well, first, I meant to say January not Feb, which someone asked about in class. I don’t know what happened. Maybe I time traveled and made it in the future. Idk. But I was pretty unsure about how I wanted to do it. I ended up buying some colored pencils, a media I don’t have much experience with, and decided to color it as I went along.

My consciousness… Started with hearing the word “wood” in the background, that lead me to drawing the Log Lady’s Log from Twin Peaks. I drew a phone, because it had something to say… the skull was just a doodle, then the cat moon and stars, with a storm cloud (because it was rainy outside). I thought about how I like to draw birds, and I drew a random birdy. Then came the tombstone, which I was thinking about how I wanted to use a Kurt Vonnegut quote as my question, and I have a tombstone he drew from a book tattooed on me. The apple came about because I thought I would like the shape. Green for Apple Records (beatles fan). I took a break and watched a Princess Peach cosplayer’s videos, so I drew to represent her (Princess Peach has been my favorite since Toadstool). The mushroom, for the Mushroom Kingdom. I wasn’t sure what to draw next and my lovely boyfriend suggested BOOGERS… so… boogers it was. The hermit crab was very random. I kinda started drawing a spiral and he was born. I think he’s my favorite surprise. Then I wrote the Kurt Vonnegut quote I liked. I thought about how my friend gave me a burger and so I drew Mayor McCheese from McDonald’s fame, but I made him Dracula for some reason. And I thought an antique key would look cool.

I got really good feedback in class. Everyone loved my coloring book style (I told them I make coloring book zines haha) and how symmetrical it all was. I love symmetry.

The coloring pencils were easier to work with than I anticipated. I bought them mostly for my journal for this class. I’m still a big fan of watercolor/crayons tho. 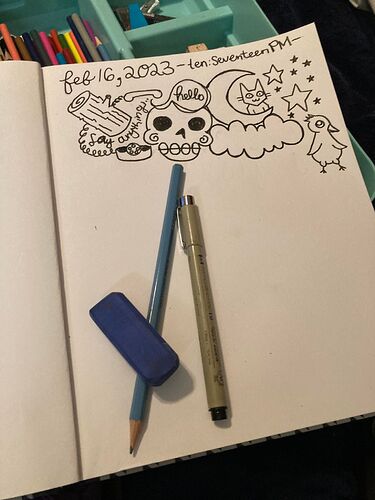 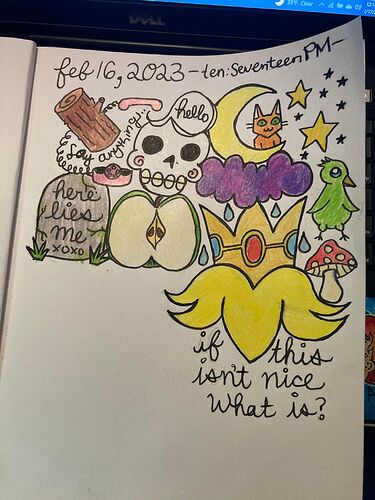 and a closeup of the cute hermit crab… 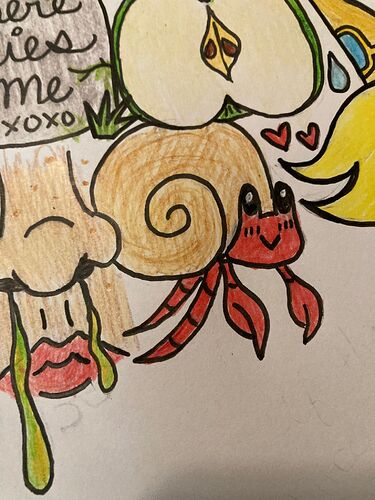 What an interesting task to be given. Your art work has a charming style. The apple is just brilliant, everything just looks … right … Thank you for sharing.

This is so cool! I love hearing about your process.

There is so much going on and it is all so fun! I adore your style. You make everything happier!

I so LOVE that quote, although I know it from John Green / Vlogbrothers rather than the original source. Your Stream of Consciousness page is so lively and fun and colorful. I love it, too! The little hermit crab may be my favorite character. Very cool!

Oh man. Peach and Apple records takes me back to middle school. Got all nostalgic there for a moment.

WOOHOO! Your sweet project is one of this week’s Featured Projects! CONGRATS!

I saw Mayor McCheese from the thumnail image on the featured craft page and just had to see it. He’s hilarious as a vampire. I really like the boogers. I think paired with the tombstone above it’s like, when you’re ugly crying and all the boogers come streaming out your nose along with tears. It’s like depression crying.
What size of micron did you use? And what colored pencils?
I used Prismacolor for the longest time then I’ve been making a switch to Bruynzeel although they don’t have as many colors. Or, the tin I have doesn’t have as many as my huge Prismacolor set.
Keep going with your journal pages–let’s see more!

Oh my goodness!! Thank you!!

I used a size 10 micron I think. The colored pencils are Artist Loft (MIchael’s brand) and they worked pretty good. They don’t blend as well as Prismacolors, but they work on a budget. I’m supposed to be doodling in my journal this week for class. Maybe I’ll make another doodle page. It was a lot of fun!

What a cool page and process, it’s great! I especially like the hermit crab, just adorable.