There’s a long story with these cookies, so… consider yourself warned.

A person who was a very important part in my young adulthood died of early onset Alzheimer’s last year. Last weekend was her memorial service in Eastern Oregon and I traveled there to attend. It was a potluck affair held at her local Grange Hall where she was very active and when I got the invitation and was considering what I could bring while being far away from home, I remembered that I had gotten the secret recipe way back when I worked for her in her shop! 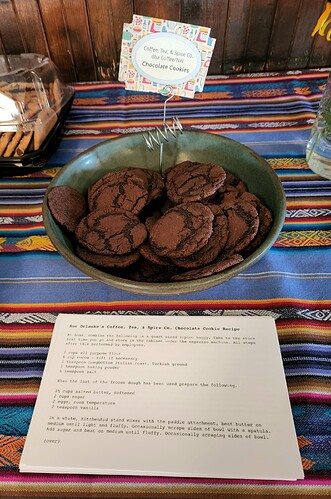 I had to dig around for it and it was scribbled on the back of a flyer that we used for scratch paper in the shop. A mutual friend who was also a big part of my young adulthood said I should bring copies, so I typed up a version that reads a bit like the directions from the store. It was a lot more info than would fit on a standard recipe card, so I made it two-sided. She fully moved on from her shop-keeper days when she moved to Eastern Oregon and became a full-artist, so I don’t she’d “give a shit” at all that I’ve shared it. 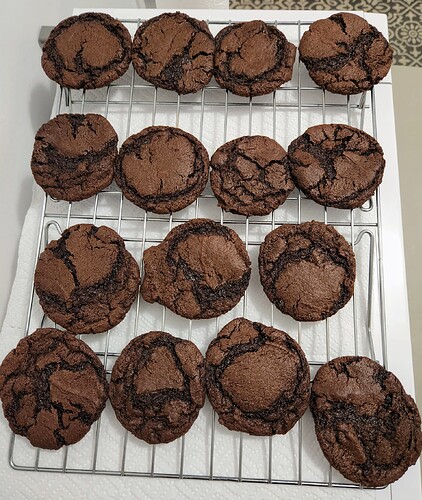 At home, combine the following in a quart sized ziploc baggy. Take to the store next time you go and store in the cabinet under the espresso machine. All steps after this performed by employees.

When the last of the frozen dough has been used prepare the following.

In a white, KitchenAid stand mixer with the paddle attachment, beat butter on medium until light and fluffy. Occasionally scrape sides of bowl with a spatula.

Add sugar and beat on medium until fluffy. Occasionally scraping sides of bowl.

Beat in eggs one at a time.
Add vanilla, beat until combined. Scrape sides of bowl.
On low speed, slowly add in dry ingredient mix. Mix on medium-low until fully combined.

Transfer to an air-tight container, top with plastic wrap in contact with dough, put on lid. Freeze.

Store opening procedure: put on apron, get coffee started, turn on espresso machine, and preheat counter top convection oven to 350F. Remove dough from freezer to make it a little easier to scoop.

When the first 2 pump pots of coffee are made, start the decaf. By then the oven should be up to temp. Use a #40 spring-loaded scoop to drop 4 balls of dough onto an ungreased baking sheet, about 2” apart. Bake for 9-ish minutes. Insert cash drawers into registers, stock cups, lids, etc. Turn on lights, unlock the door.

Transfer baked cookies to baking rack to cool completely, when cool place on a tray in the truffle case on the end by the coffee scale. Sell by weight.

I also made a little sign so people would know it was her recipe from the chapter of her life before they knew her. The bowl they are in is one she made and gave to me years ago.

I made the dough at home before I drove out and froze it. Then transported it in a cooler and rented a small AirBnB with a kitchen so I could bake them morning of the memorial.

That is an awesome tribute! and you have added to her story.

I’m not crying… this is awesome.

I looked her up. Her art is awesome, she was a force.
The cookies sound delicious.
You are a sweetheart. I’m so sorry you lost your friend. (((Hugs)))

This was an amazing way to honor her past and your connection to her. I’m so glad you were able to attend. I’m sure folks there got a kick out of both the recipe style and hearing about a time before she was a part of their community. Often people think that a relationship has to fade or stagnate when someone passes, you and your memories of her gave them a chance to interact with their relationships with her in a new way. What a gift.

Aw, this is such a special way of remembering your friend and sharing your memories of her.

And so cool of you to bake the cookies fresh, that very morning (just as they would have been offered at the shop).

Thanks everyone for your condolences and kind words! I thought I’d share a couple more photos from my visit - with additional story, of course!

Recently the Art Center East - an organization that Sue was very involved in - renamed one of their Co-op Gallery after her. 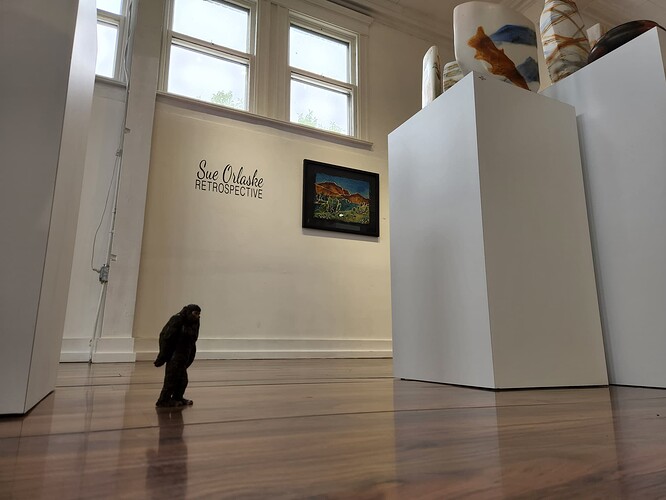 And their August show was a retrospective of her work! The gallery director and Sue’s widower went through her vast inventory of work to select a bunch of pieces for the show, the proceeds of which are going to support art education programs at Art Center East. 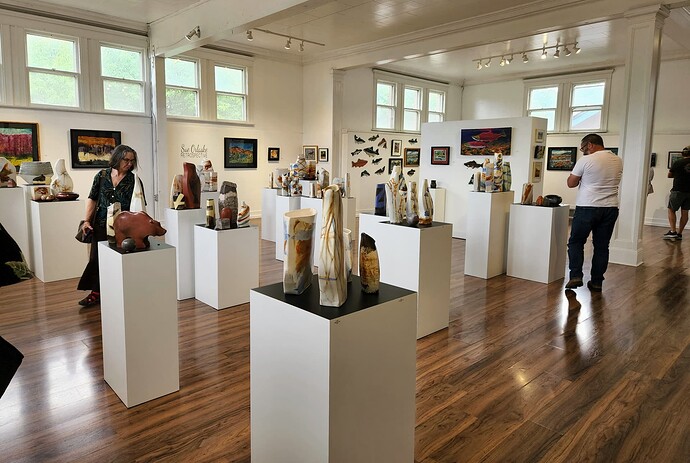 The friends I went with counted over 30 sold paintings and over 30 sold ceramic pieces! I bought this small sagger-fired porcelain piece that will be shipped to me when the show ends - it’s been extended through September. 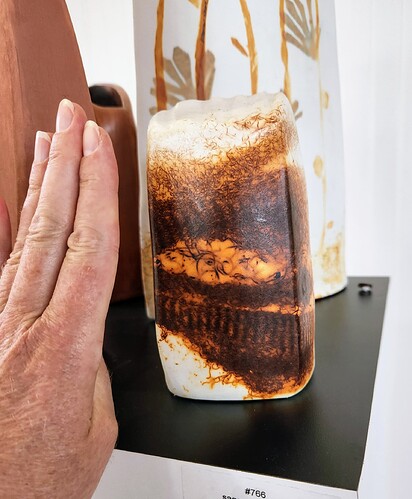 This is an awesome tribute. It’s an honor that you shared the recipe with us! I would love to give it a try. I hope my black Kitchen Aid is an acceptable substitute.

Wow! Beautiful work and fantastic piece! It’s apparent she was treasured by many.

Love the story of the recipe and the artwork is exceptional! Wow!
How wonderful that you’ll have a piece made with your friend’s own hands as a memento in your home.
Can’t wait to try the recipe:). Thx for sharing

I love that you were able to share that recipe with other friends who missed Sue. Thank you for sharing the story and her work with us.

I am lucky to have several pieces she made as well as pieces from the store I worked at as a young adult.

The cookies are a perfect way to remember her and to pass on a touch of her legacy to others. You always seem to be thoughtful in unique ways.

And I love those smoked clay pieces! The bears and raven are my faves.

Such a beautiful (and yummy looking) tribute.
Thank you for sharing the recipe. Having never worked in a cafe, it was interesting to read a bit about the daily processes there.
I’ll for sure try this recipe, we love cookies.

This awesome project is featured this week!

I love this! Those cookies look amazing and such a wonderful tribute.