Whew, it feels like ages since I’ve finished a project, but today I finally finished one that I’ve been working on for over a month: this Virus Shawl with Sultan Deluxe Shine yarn!

First, just look at the gorgeous colors of the Imperial Purple yarn! I absolutely LOVE this colorway!! 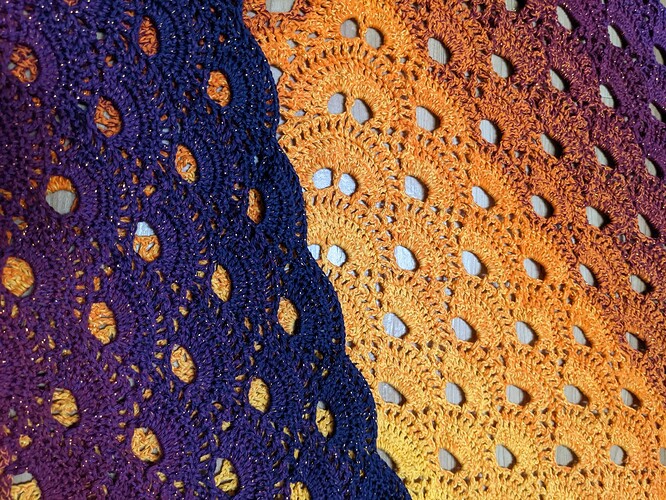 Here’s the whole shawl, in all its glory, on my kitchen floor

The pattern was surprisingly easy; after only two or three repeats of the set of four rows, I never even looked back at the pattern again! Given that I have a HORRIBLE short term memory, this is honestly pretty impressive, and was made very much easier because I never had to count more than ten stitches at a time! I recommend this to anyone who has difficulty following or concentrating on complicated patterns; it was such a relaxing thing to just keep repeating the same familiar stitches. 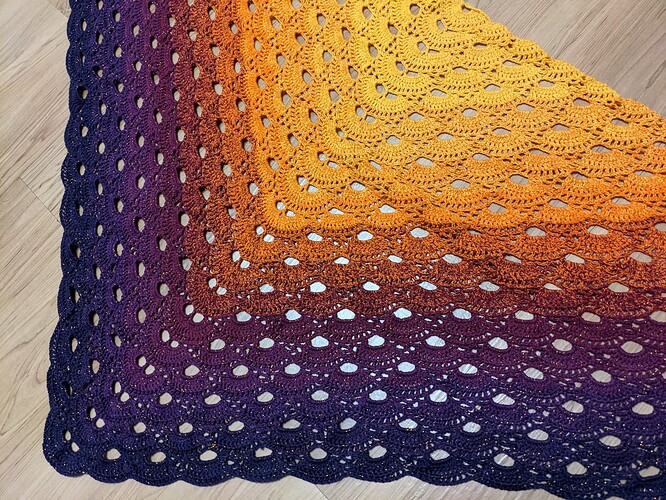 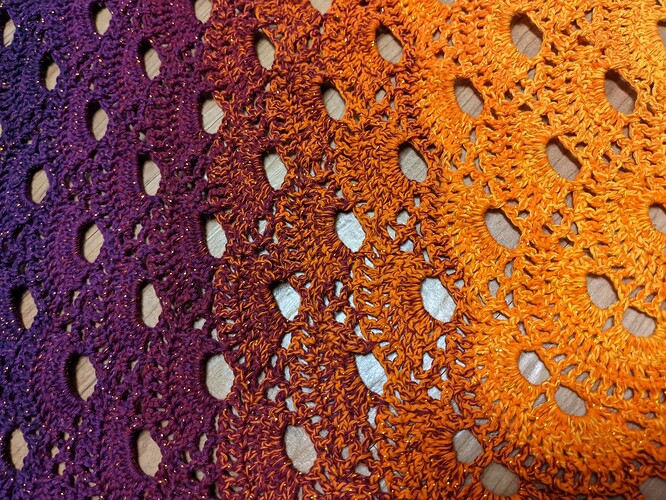 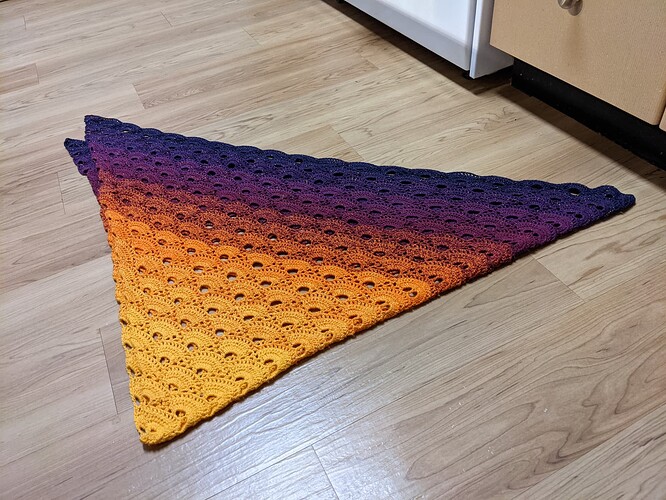 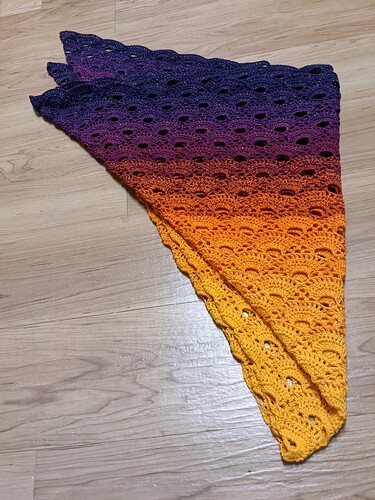 The yarn was mostly really great to work with too! Despite a single strand of metallic gold running through the whole thing (it doesn’t show up in the photos much but it really sparkles!), it’s not scratchy at all, and feels very pleasant on the fingers. I hadn’t really worked with cakes before, though, and so ended up letting the last 20% or so of it get tangled into an enormous mess; it looked kind of like a chain gang of yip-yip monsters. But after an hour and a half of very patient, gentle untangling, I managed to get it workable again (although I did have to cut it four or five times to be able to untangle everything). At the very end I was playing yarn chicken with the wee bit I had left, and I actually lost, only a couple of inches from the end of the very last row! 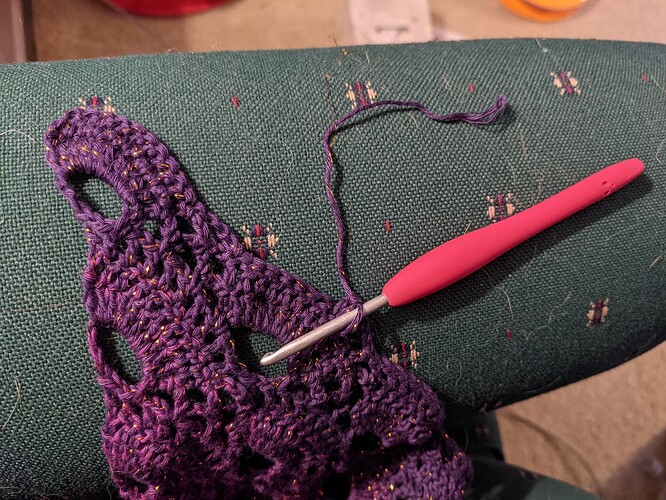 Fortunately I had another cake of the same line of yarn, with a color that was close enough to fudge the last little bit: 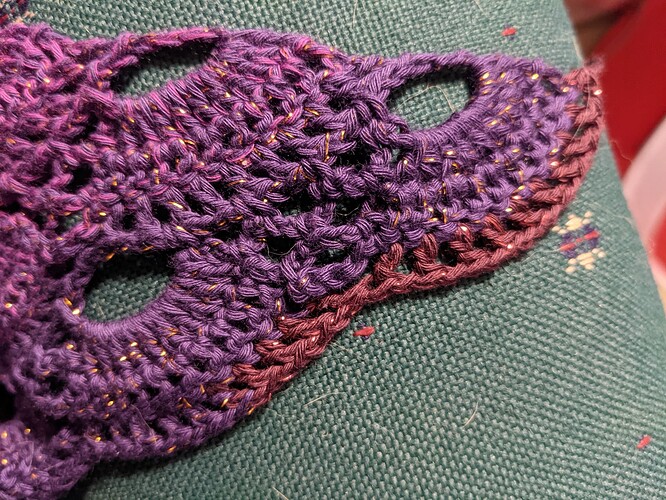 It really is beautiful yarn (and on sale right now)!!

Oh, and lastly, just because I couldn’t help but show you a bunch of cat hair in those last two pictures, I may as well show you the critter that spread it everywhere: 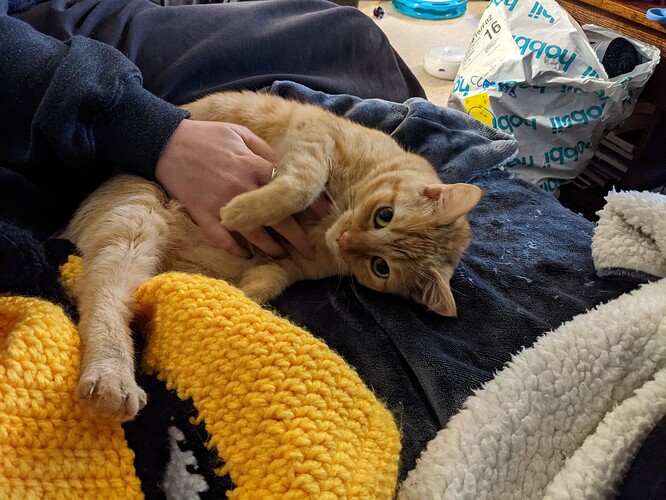 Beautiful! Just lovely work & the yarn was an excellent choice.

Beautiful yarn with that pattern

Oooo this is super pretty!! Nice job. Would never have noticed the yarn switch up at the end.

So very pretty and the yarn sounds wonderful! It was clever to use that close-enough yarn at the very end.

It’s beautiful! And goes so well with Lady Paprika.

The pattern works so well with the colour gradiant!

This is a stunner! Great save with the “close enough” yarn. No one will know!

I was going to say that it’s a beautiful sunset, but @Tanath beat me to it! This really is gorgeous. I must say that you have taken to crochet like a duck to water.

This is so well done! The colors are spectactular! I love the fade.

Absolutely lovely! And yeah, the Virus pattern is great, easy to remember while working on, but also looks complex and impressive.

Ooh, that turned out so pretty! Excellent yarn choice!

Congrats! Your Sultan Virus Shawl is one of this week’s featured projects.

I love the way the colors change on this. Beautifully done! Normally when I see orange and purple I immediately think of Halloween, but this has more of a sunset feel. It’s stunning.
I also love the added kitty pic! What a cutie.

That is just gorgeous!

Your shawl is beautiful!