I’ve been down in NC for the past week visiting some college friends. The house they are renting is right near the beach, so I thought that I would bring a beach-themed craft to make while they were working.

I found this pattern via Club Crochet, but it was written by ravencraft_designs.

It was an easy project but it was made from 7 parts that had to be joined together. It could be made with only 2 towers, but I felt like a sandcastle needed the 4. It also has an optional drawbridge and some optional detail embroidery, both of which I skipped. It’s fairly small and fits in the palm of my hand! 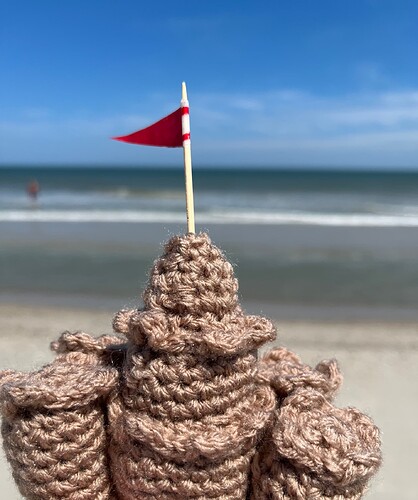 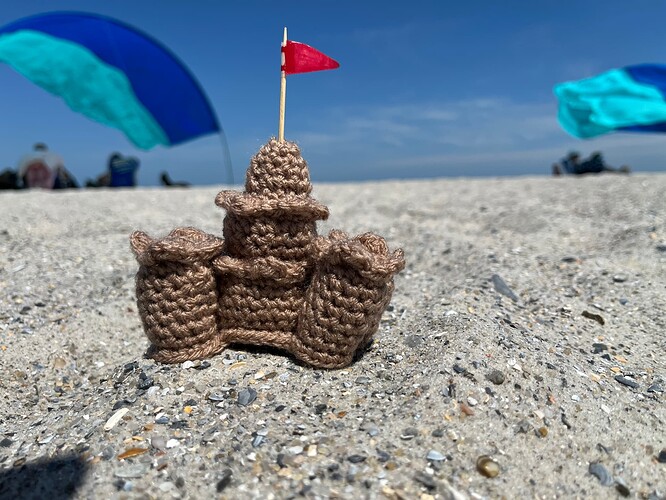 Adorable! And that is some A++ styling right there.

This is adorable! I love that you got a shot of it on the beach!

Super cute! And the beach shots are amazing.

Cute! Did you crochet the ocean, too?

That’s the cutest sandcastle ever! Love the beach photo shoot, too.

That is so fun, and a beach memory “souvenir” you can bring with you.

LOL! My friend said I needed to crochet the sand

Thanks, everyone! It was the one craft project I packed, knowing I’d be within a 2 minute walk to the beach. I didn’t have time to work on it until yesterday, when I got all of the parts stitched up. I assembled it this morning and made the flag- the flagpole is a toothpick.

So cute! A perfect beach craft!

Perfection! In the thumbnail pic, i truly thought it was a dribble sand castle!

Adorable! I love that it fits in your hand! Perfect backdrop for your photos!!

ha ha What a fun way to remember your time down here!! I love how tiny it is…toothpick flag…ha ha

I also thought it was a real sand castle in the preview. This is so sweet!

It’s so itty-bitty! What size hook did you use?

It was worsted weight yarn, with a 4.0 mm hook. Easy to stitch!

This is so cute! I would be torn between keeping it as my souvenir and leaving it somewhere as themed found art for someone. Love it!

I was torn, for sure! I did end up taking it home with me, though. It’ll be a little model for my crochet club signups this fall!