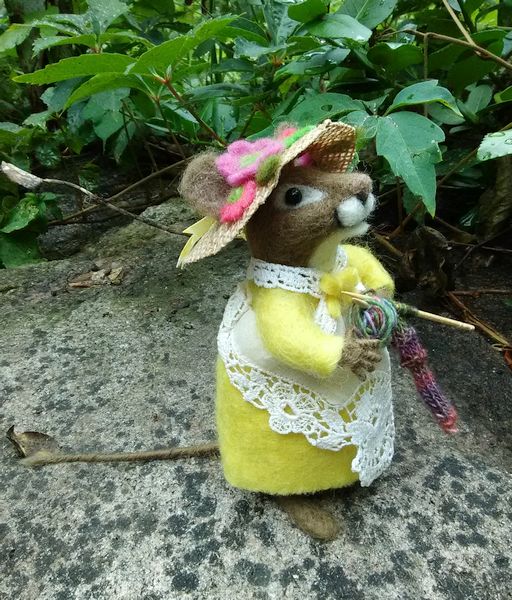 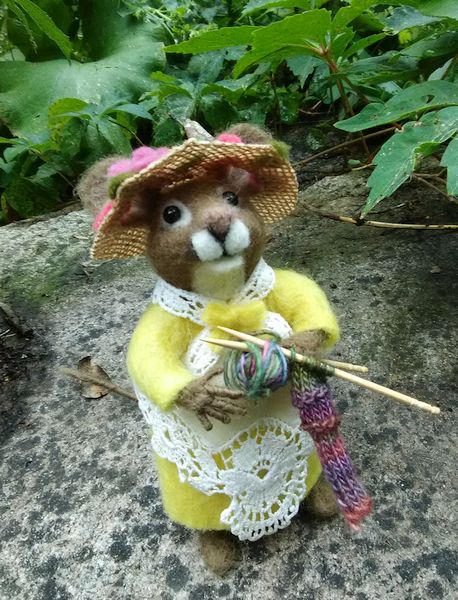 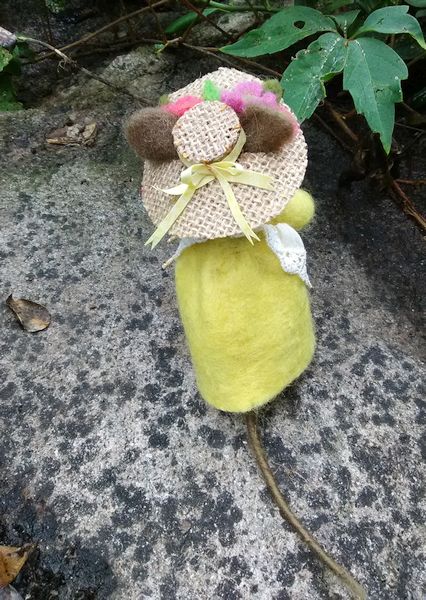 Her apron is made from an old handkerchief that is beyond any possible use except as an apron for a mouse that attends a knitting bee on Sundays.

Your collection of story telling mice is growing…and, since I knit, this is my absolute favorite! She is so adorable!

I love her long tail…and you actually had to knit so tiny!!!

Years ago I knit floss on pins for another project. This gauge wasn’t nearly as hard!

I love the second photo of her expressive face. She looks curious and kind!

She is so bright and cheery. I love her eyes, tiny fingers, and tail. He had is adorable too.

This is absolutely adorable! The added scrap of an old hanky makes her outfit utterly charming…and swoon, the mouse knits!

These keep getting cuter and cuter. And what mouse wouldn’t want to attend a knitting bee?!?

Ack! I am undone! I cannot promise to not be looking for ways to just be “in the neighborhood (wherever that is) , dont wanna give me that mouse by chance, eh?” Haha!

All kidding aside, you’re killing me with these friends. They speak to me and my love of Rose Cottage…

She was fun to make!! Originally I thought I would be going somewhere where it would be possible to pick up some lace, but we’ve been plague with problems with our van of late so I went looking through things I had and happened upon the handkerchief!

After I got her dress and apron finished I was trying to decide what to give her to hold. We tried a small basket, but I did that not long ago with the hedgehog. Knitting just popped into my head. Had to sand the toothpicks so they wouldn’t snag the yarn. Started off with a piece yarn that ended up being too short. Tied some more on only to have the knot fail (I trimmed the excess too close) after I had knit another row. Was only able to knot on some more with the use of a crochet hook and some patience. LOL!! If any of my future creatures knit, I will try to plan ahead better!

I wish to attend her Knitting Bee!

So adorable! I love it!

So sweet! I love her little expression and she’s so cute with her apron and her hat and her knitting!

base, but I don’t know what I am going to do with it just yet. Have to sort out problems with the van first.

Oh my goodness. Too darling for words!

Super cute! I imagine this being me in 20 years.