Project from the old site but only posted in a craftalong… 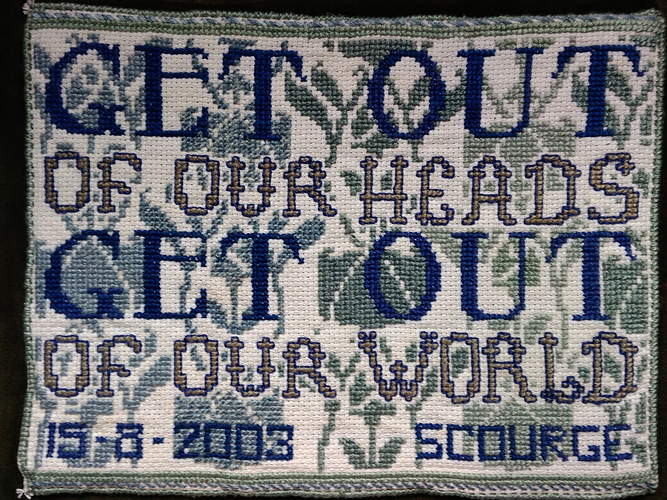 InShot_20200928_0940430621282×960 1.47 MB
The short explanation for this is that there’s a Doctor Who story where a predatory alien species called the Scourge breaks into our dimension in the middle of a 2003 cross-stitching convention (how rude of them!). The attendees eventually stop the creatures in their path of destruction and domination with these words long enough for the good Doctor to arrive and banish them back to their home dimension. It seems fitting to commemorate the occasion in cross-stitch; give cross-stitchers some credit for saving us all!

Rather than a regular tv episode of Doctor Who, this came from the audio drama “Shadow of the Scourge,” aka Main Range album #13, available on Spotify.

But here’s why it went from a quirky idea to something I devoted a lot of time to and finished. The story posits that humans’ debilitating self-doubt, irrational viciousness, and destructive inner dialogue–what religions and cultures have generally referred to as the Devil, Evil, inner demons, mental illness, etc.–are the work of these creatures from another dimension, whose survival depends upon our own inner suffering. That since the beginning of humankind, these creatures were putting all these harmful thoughts in our heads because they literally feed upon human fear, shame, hatred and despair. There is much to chew on about this (in more ways than one!)

By the end of the story, amidst all kinds of death, chaos, and characters’ soul searching, one of the lead characters convinced all the cross-stitchers’ they could take control of the situation by refusing to give in to their fear and whatever else in their minds was feeding the creatures. She and all the stitching enthusiasts start yelling at the creatures repeatedly, “Get out of our heads, get out of our world.” It works. They’re sent back to their own dimension.
It’s not an end to human suffering, but those who were present that day could see it for what it was and no longer have it run their lives.

And so, for me, the story and this resulting stitching is about standing up to that which destroys us from within, and reclaiming one’s power and mind from madness and darkness, both within or without. And beyond speculation and innovation, science fiction is such a lovely and powerful vehicle for looking at all parts of the human experience through different and new lenses.

Both the fonts and the floral background were found on the Antique Pattern Library website. I had all these small amounts of shades of dusty blue, none of which I like on their own but I rather like how they look with the art nouveau-era floral pattern.

This is fantastic! I love the story behind it.

WOW! What a great piece and a very nifty backstory!

Love your mix of antique pattern with modern pop culture. Your stitching is awesome.

It’s a beautiful cross stitch with a fabulous backstory!

It’s fun to think that it could be that easy. I’d cross-stitch furiously if it would stop what happens in my head