Long ago, I threw my energy into creating a handspun yarn that would follow the colors and textures, from start to finish, of the film The Wizard of Oz. This was a huge labor of…not necessarily love, but a compulsion to see the vision through to its completion. I don’t know of any other film with visual design and plot that can be so well represented through series of colors and representative shapes/objects. 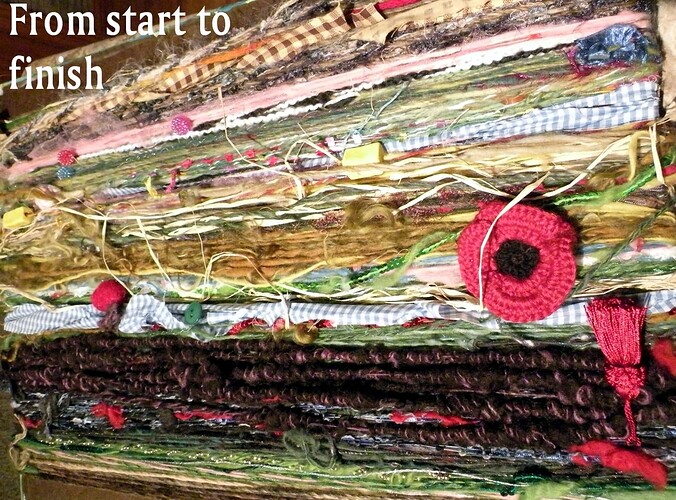 The initial idea struck me in the middle of the night, and the details started flooding in, so it had to be done, whether I wanted to do it or not! In theory, a very fast yarnie could put the movie on and start working on the starting end of the skein, and whatever is going on in the movie would be reflected in the yarn they’re working with.

I’m not a big Oz-o-phile, but I studied the movie intensively for about a month (including its cultural impact, which interests me more than the film itself), and with a large, sturdy paper I created a notebook of colors, patterns, scene progressions, and ideas for possible add-ins and yarns/fibers to use. 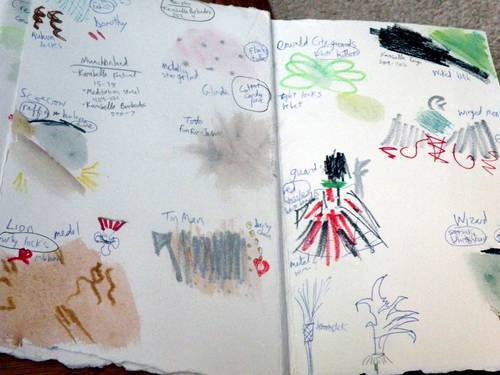 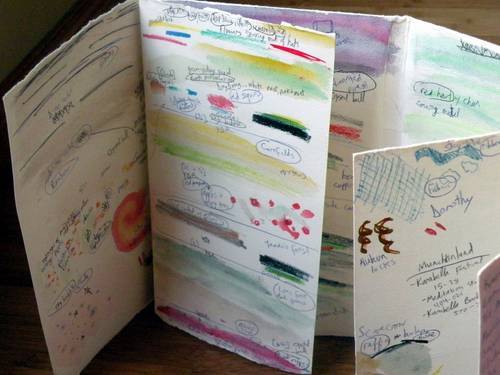 When I knew what I wanted to do with each section, I drew a map of the layout of the yarn so I could work on different sections as I saw fit and connect them later on in the right order. 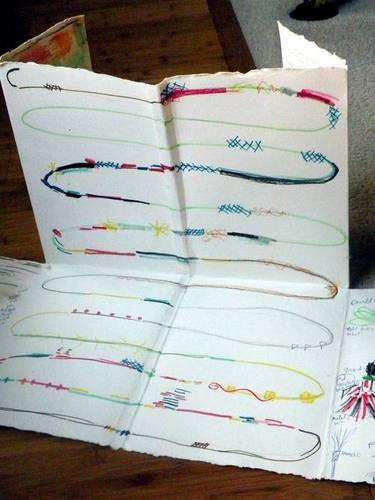 Then came the process of gathering the materials from near and far. Dyed batts that Ravelry members were destashing. Angelina fiber for the ruby slippers, but firestar fiber for the Emerald City, to have the right kind of sparkle for each. Pink tulle for Glinda’s skirt. Curly, golden locks for the Cowardly Lion. Raffia to serve as the Scarecrow’s straw. Metallic gray fiber for the Tin Man (the best answer to this need, after an extensive search, was mulberry silk).

Some scenes and characters became represented by buttons and beads from my stash; i.e., there are 3 pink buttons for the dancers in The Lullaby League, followed by an orange button, a green button, and a blue button for the Lollipop Guild. The marvelous amydice crocheted some elements for me in the OTT Wizard of Oz swap.

Then there were the many, many hours with my drop spindle. Some of the components, in their early stages: 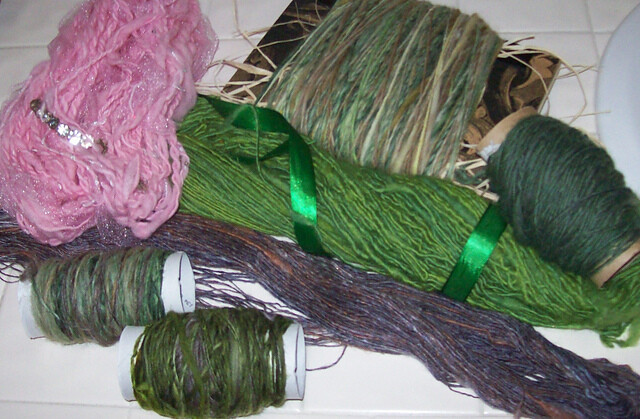 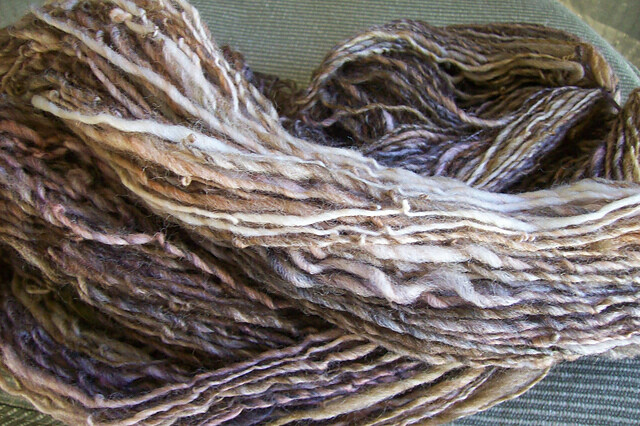 I don’t know what the total yardage was, but before plying there was at least 1300yards spun up, not including all the yardage of commercial novelty yarns that are also in it. The LYS owner let me use her drum carder; here was the Munchkinland fiber I carded up: 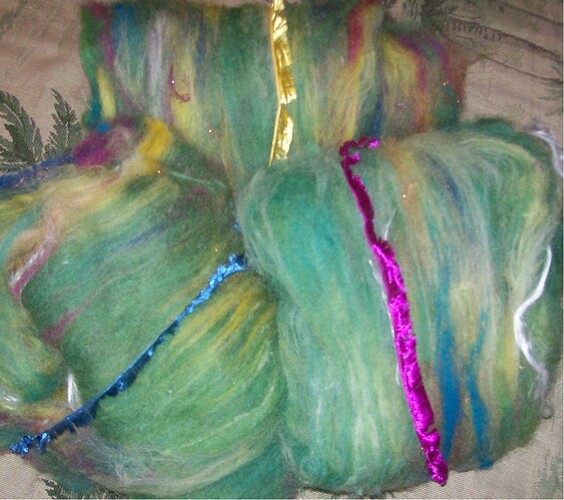 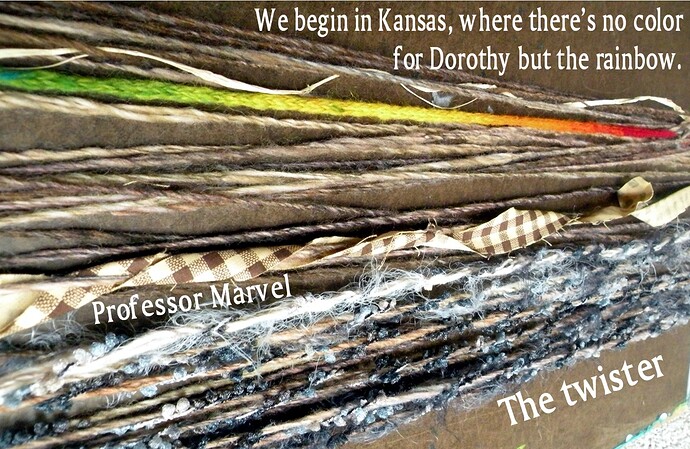 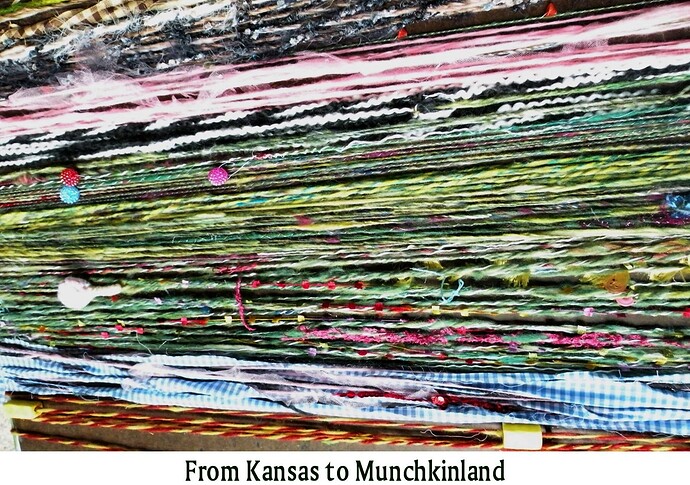 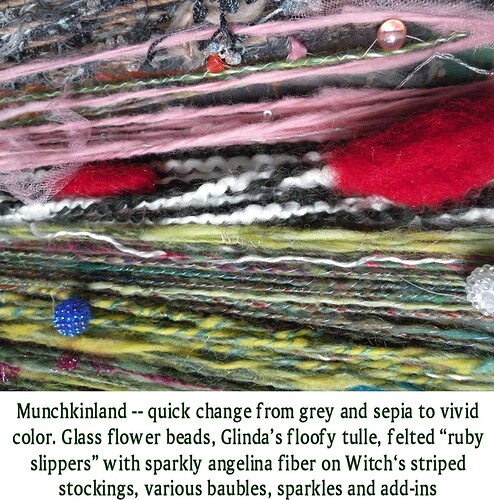 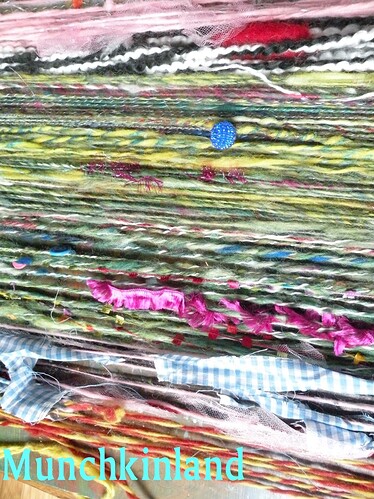 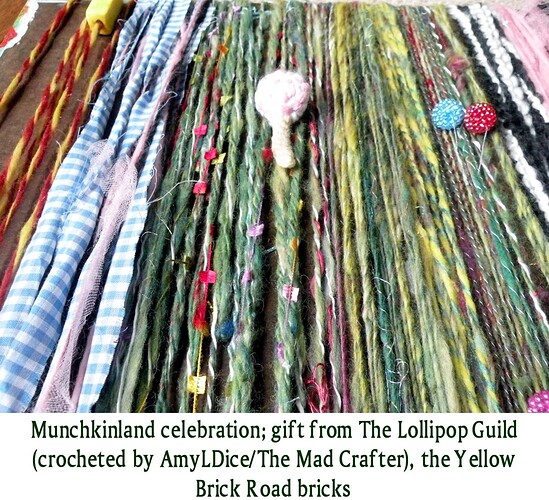 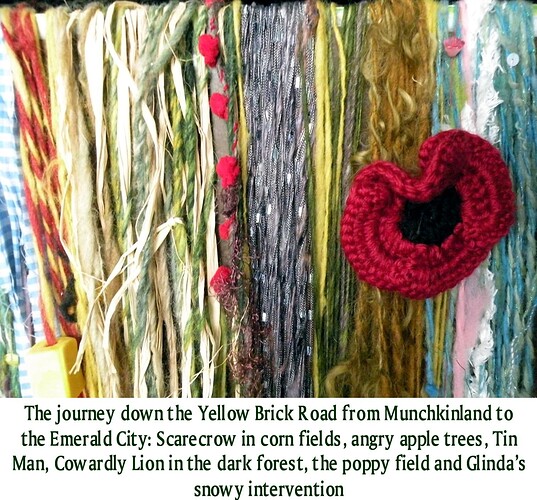 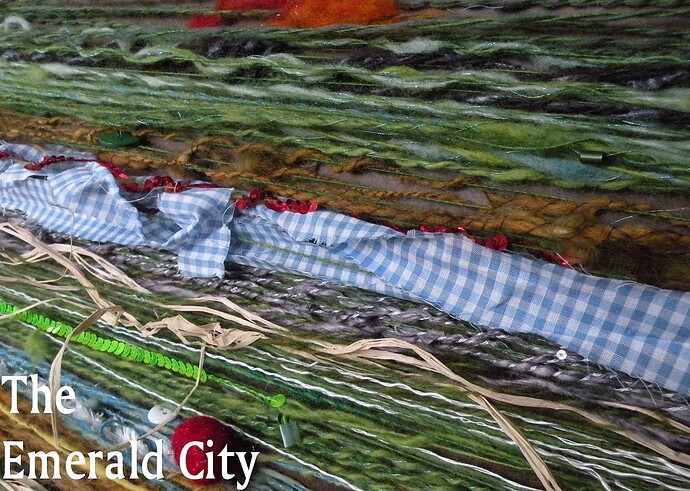 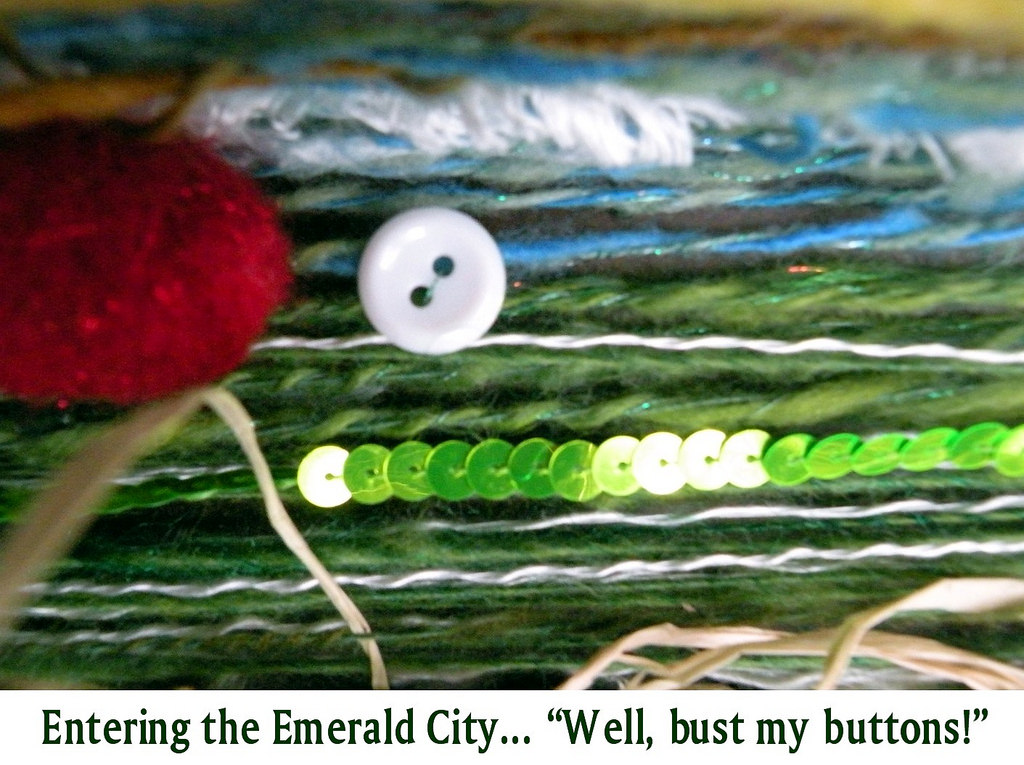 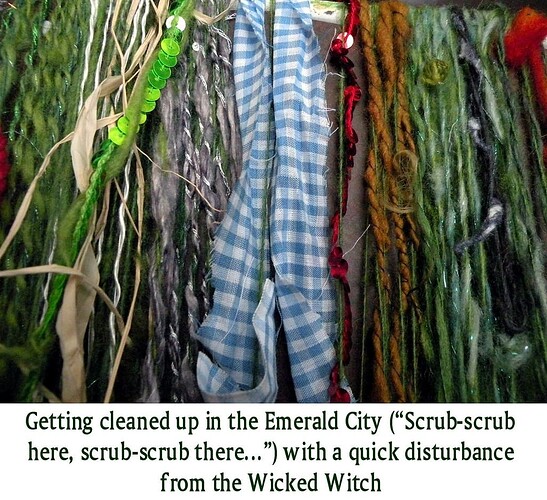 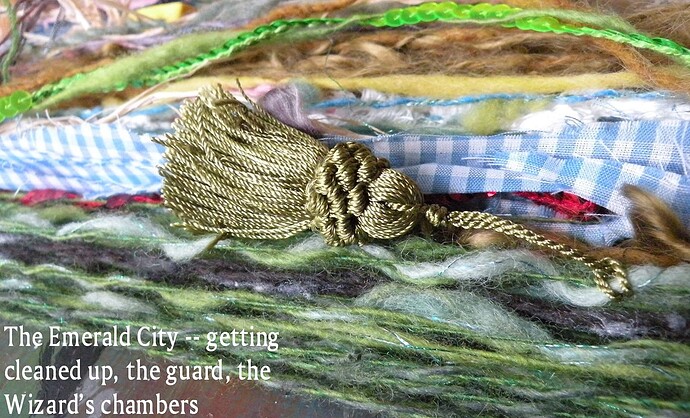 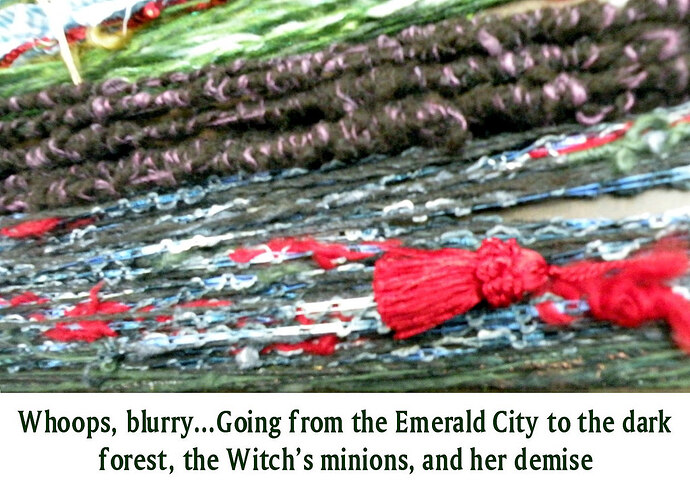 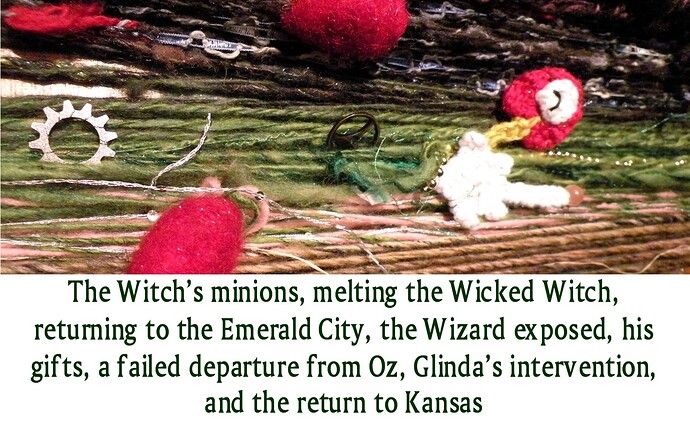 I think this might have been the project that made me fall for you as an artist. Concept, consideration, execution. You are such a thoughtful and considerate creatrix, this is amazing and SO ARE YOU.

What an incredibly creative feat! I love it! You were right that this movie lends itself to a clear progression of different colorways, and was itself a boisterous celebration of brand-new Technicolor technology. What a fabulous homage!

Wow! This is the most intense fiber journey! What an amazing concept and just so superbly done!

This blows me away (no pun intended) the detail, the intensity of the creative journey, the execution-is our of this world. And the result is fabulous. I love love love it. I love the research and the journey it took you on. And the yarn is glorious. Have you a plan for the finished yarn, or are you going to look at it and croon over it. (I would!)

What a project! And so interesting that it demanded to be done whether you wanted or not- that’s true art on a visceral level. I’m also curious about how it is displayed/stored after the build was complete. If you haven’t decided it’s fate, perhaps a museum would want to display it- like in a WoO specific exhibit, a general film museum, or a fiber one. Worked up or displayed spooled/strand by strand it deserves a wide audience.

thanks, all! To be honest, I was so over it after however many months or years it took that I tied the different sections together with overhand knots – making it all the less user friendly, but I never really meant for it to be used. I sold it soon after it was finished, since I really needed to recoup what I spent on the supplies and it was time for someone else to get to enjoy it!

As for its display, I opted to loosely weave it so it wouldn’t get tangled, and the person who purchased it could just cut the warp and do with it what they wanted. 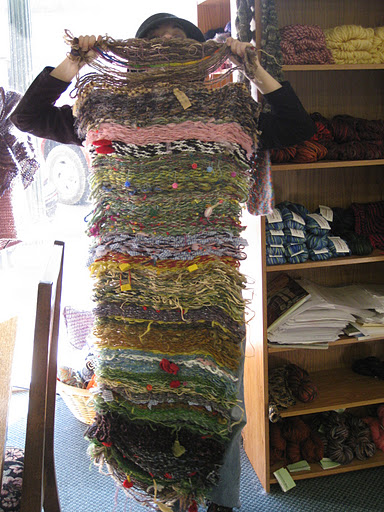 There was a disproportionate amount of some sections, so I also made a mini skein to keep and used the excess in other projects over time (as in, I still had some a decade later)

Whoa. What a cool and interesting project! I’m glad for myself that you stuck it out and glad for the piece that it immediately found a home where it wasn’t resented.

amazing.
Did you ever learn what the buyer did with it?

Sadly, I didn’t hear a peep out of the buyer, who bought my other favorite art yarn at the same time (and as far as I know, it was a total stranger). But someone else told me that’s a good sign when selling yarn online; people tend to only contact you if they’re very unhappy with the purchase! That was my one and only time selling crafts, so I left the matter alone.

Maybe they just hung it on a wall, so they could enjoy looking at it and finding new elements.

Oh my giggles! Your lovely craft is one of this week’s Featured Projects! Congratulations!

This is Wickedly awesome!
The effort you put into this, just wow!

This is so creative!

What a gorgeous art yarn! I love the detail and amount of research that went into picking all of the colors. What a creative and brilliant idea.

I recently saw an ad online, probably on my fb feed, for canvases with a colour representation of each scene of a movie. It was quite an intriguing idea.

Obviously those canvases were all done with tech, but your sketch book of info was amazing to see. Your quick sketches were instantly recognisable, as abstract as they were and the time and research you put into finding just the right materials… I actually can’t find the right word to explain how cool that is.

The piece as you finished it is very similar (but totally, awesomely different) to those canvases I saw. Such an amazingly visual movie can really be seen in this display and I just love it.

Thankyou for creating it, even if it was just to get it out of your head, into a piece of art for us all to see.

This project is such an excellent example of you as an artist. I love your brain. and love what you’ve done. You’re fantastic, and I’m amazed to see your work.

Also, I would love to hear more about the cultural impact. Wonderful.