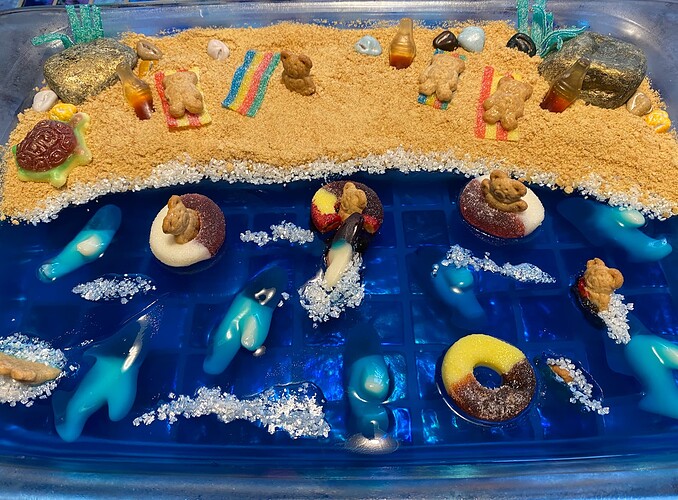 When I was working on the theme for our Take A Bite Out Of Your Stash Challenge, I spent some time looking around at various beach and shark themed craft projects. There’s a whole genre of projects specifically celebrating The Discovery Channel’s annual Shark Week. (Shark Week also celebrates it’s 34th birthday THIS WEEK!) One of the things I kept seeing were Jello desserts featuring gummy sharks. Since it’s been a long time since I’ve done a completely bonkers craft project, just for the sheer hell of it, (and since I could work on it downstairs while watching the baby), I decided to make my own shark infested beach scene. 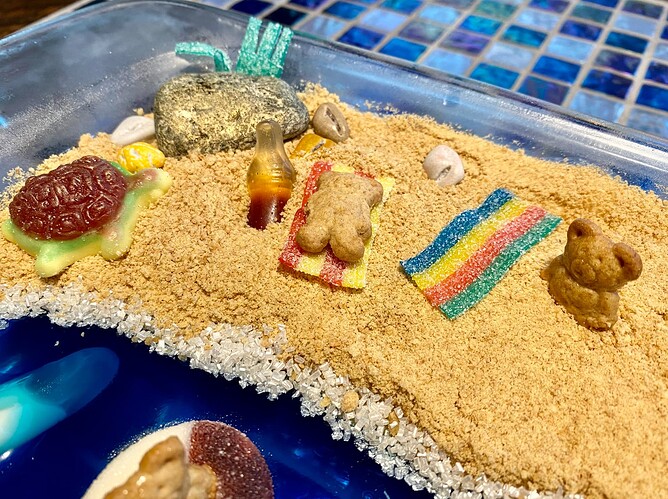 The water was created in 2 layers of blue Jello. I laid the first layer (an 8-serving box), then propped the pan up in the fridge, with a rolled up towel under one side, so it would be slanted. After it was set, I cut slits in the Jello with a paring knife, then pushed the sharks down partway in, before adding two more 4-serving boxes. 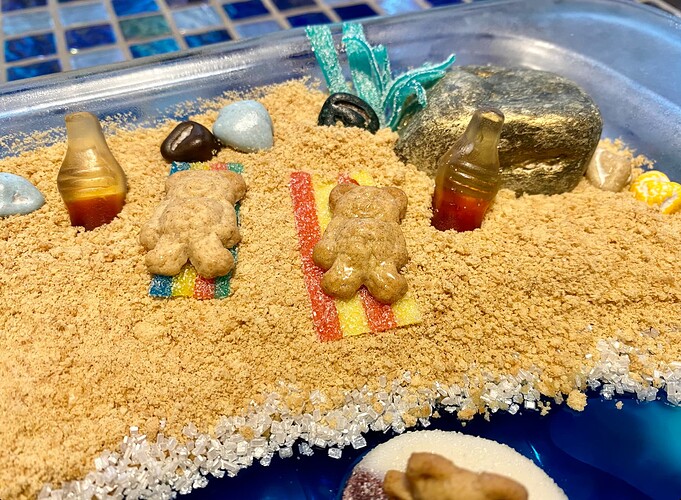 The beach was created with a layer of vegan whipped topping, then a layer of graham cracker crumbs that I ground up in the food processor to get a fine and even texture. I used sour gummy tapes as the Teddy’s beach towels, and gave them bottles of cola. The waves are highlighted with white shimmer sugar. 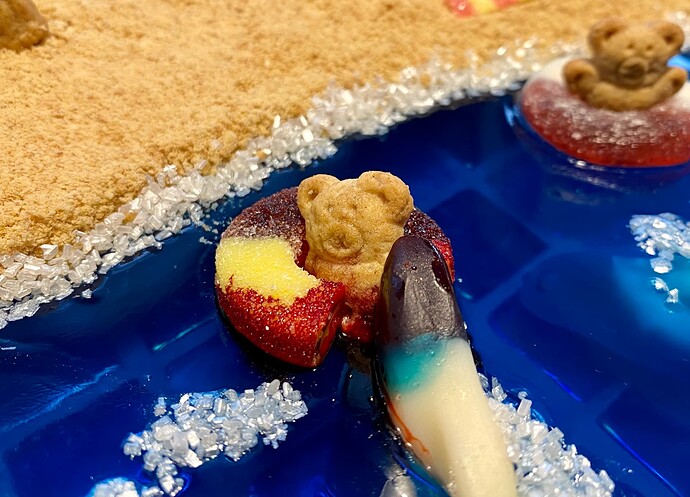 Some of the Teddys are enjoying time in their inner tubes, but one unlucky fellow has had a bite taken out of him. (The blood is red food coloring.) 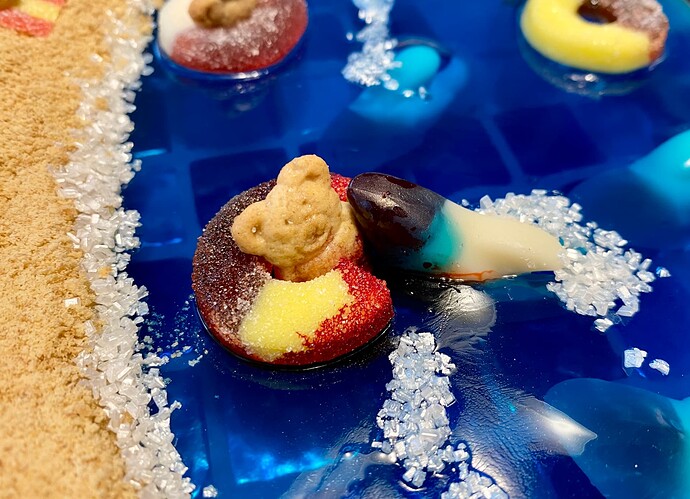 This little guy has lost a leg, but is fighting back. I’m pretty sure he punched the shark. 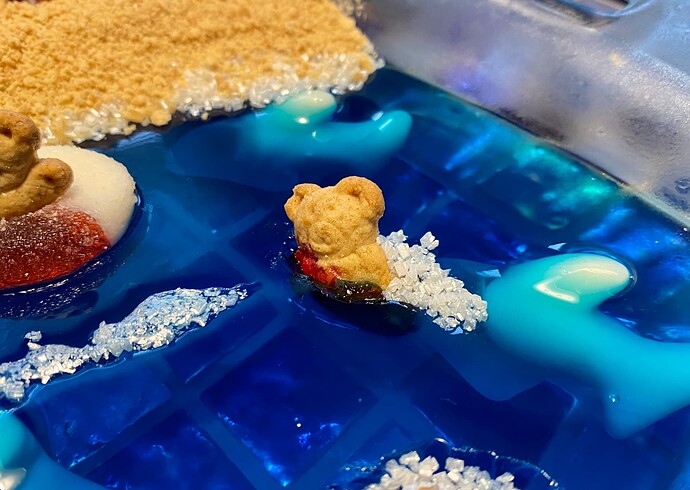 Another little guy is unwittingly swimming straight at a shark. 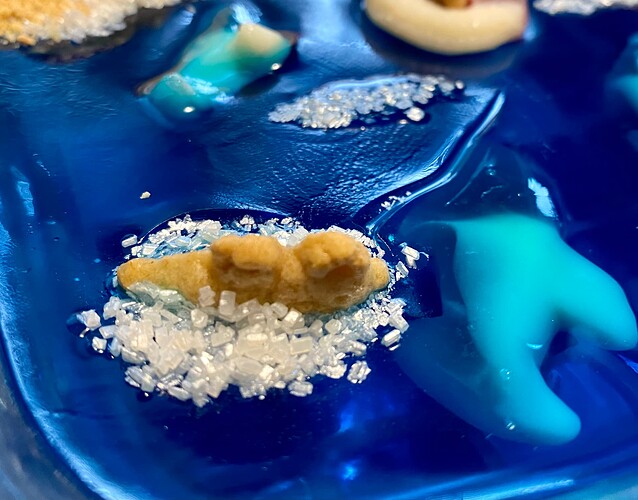 Much of the supplies came from stash, but not all. I did stop at the mall on Saturday to go to their bulk candy store for the gummy sharks, tapes, turtle, cola bottles, and chocolate rocks. The whipped topping, graham crackers, shimmer sugar, Teddy Grahams, red food coloring, and one of the boxes of Jello were in my kitchen already. 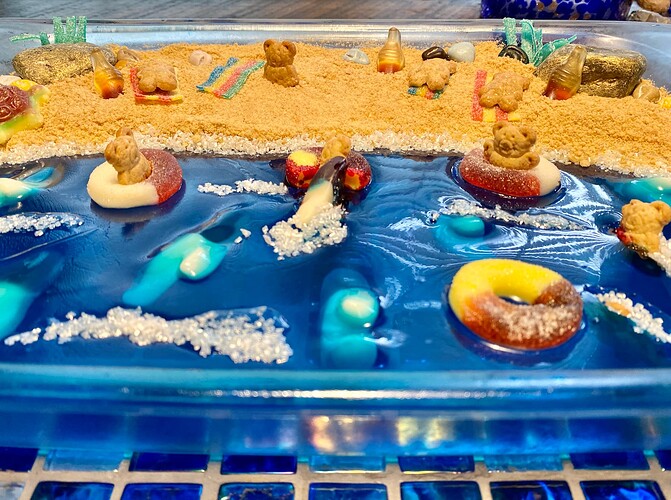 Since this is way more than my husband & I could possibly eat, I just brought it over to my neighbor’s house. They have a 7 year old son who was totally on board for an enormous (16 servings) pan of Jello and candy. Apparently I made his week!

Well this is the best thing ever. Absolutely hilariously awesome!

I ran out of time to make a sign saying the beach was closed. Oh well.

Totally fab! A whole little melodrama depicted in Teddy Grahams and gummy sharks. I love that it was gifted to a kid who will appreciate all levels of its awesomeness.

This is so awesome!

I love it! I have been planning a Teddy Grahams beach cake thing for years (no summer parties since '19) but not a beach attack scene! Fantabulous!

Omg the mix of adorably sweet candies and such a horrific scene is just…genius! lololol. Love the touch of food coloring for blood of course

This is absolutely adorable! I wish i was this creative when my kids were small!

Hysterical! I love it!

This must have been so fun to dream up and put together! A real giggle fest. And so nice that you found the perfect “audience” right nearby!

Haahaha! At least those bears kept on smiling!