I saw a hat here made by @storerboughtcreation , called The Wynn Hat. I followed the link and ended up buying three patterns. The designer is NooWul Designs.

I started with the one called Lyra. I had a skein of purple yarn with glitter that I thought would work…Strike one: there was not enough and you could not see the stitches very well…frogged.

Then, I thought maybe the skein of grey yarn would work…Strike two: it was stiff and just ugly for a hat. I turned it into a mat for under a pot. 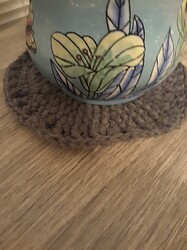 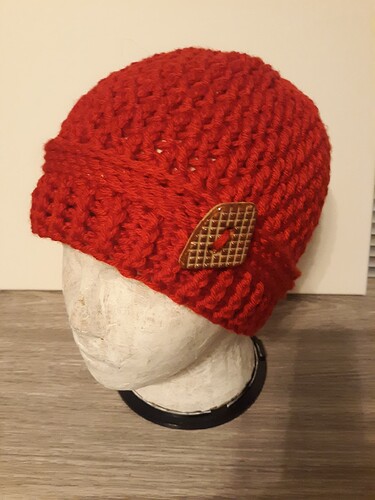 This is the link to the pattern

The other pattern I used was the Kobi Hat.

Came out a bit too soft, but still wearable…it is knit. 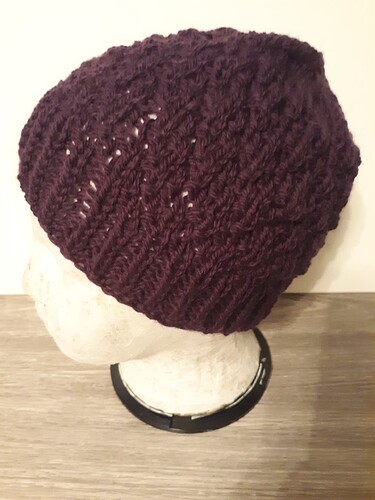 I truly wanted to try the Wynn Hat, but I gave up after many starts and fails…I just can’t figure out the pattern (I don’t know if I am crocheting into the back loop or into the row below…it just did not look like the hat @storerboughtcreation made!)…I will try again someday, but I am not buying anymore yarn…

It turned out beautifully! I’m glad you persevered

Super cute hat! That button looks just right on it,

These came out great! I loooove that button on the red one!!

Thanks…I feel awful for not remembering who sent it to me…I have received some gorgeous clay art buttons from friends here, but, I just can’t remember if I don’t put them away in their special spots…I do know it was fairly recent…hope that person jogs my memory! lol

These are cute! The buttonbreally looks great on that red hat. Was it maybe from @thanate ?
I think stiff yarn would make good coaster sets.

Gorgeous hats! I love the addition of the button on the red one too. It really ups the fancy factor to 11!

Nope, that’s not one of mine! Cute, tho.

So many talented clay artists…I hope someone recognizes it! lol

These are awesome. I can’t imaging ripping out a project. As a sewer, that is insane, so when I hear the yarn people talk about it, it mystifies me. I am glad you stuck it out. You got two amazing hats out of it. I especially love the red one with the button. Very chic.

I totally understand your pain! but your hats are lovely. I think the button on the one really adds to it.

lol my husband likes the pad better than the hats, too!

These are great!
I’m certain I know where you can get more yarn if needed! Hint: it’s in my stash upstairs