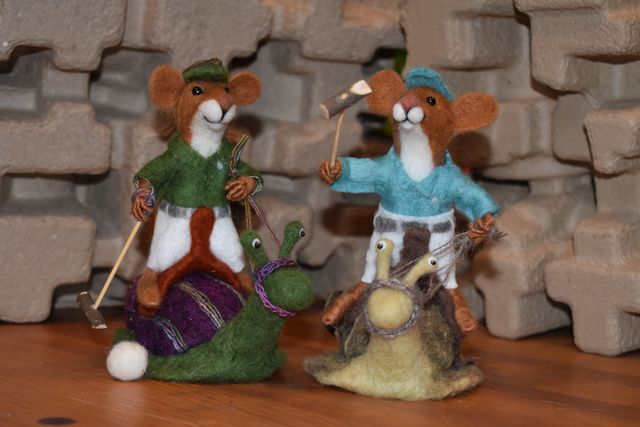 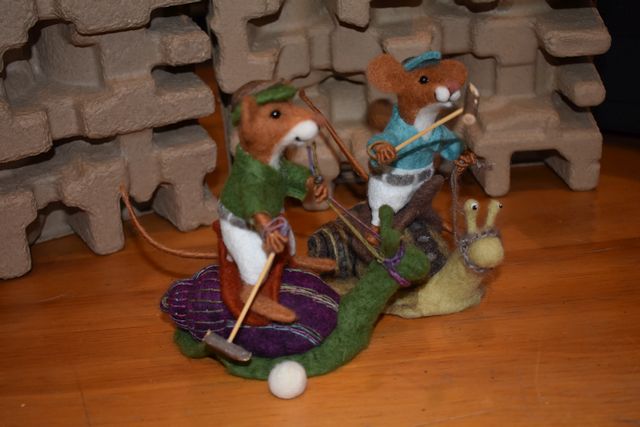 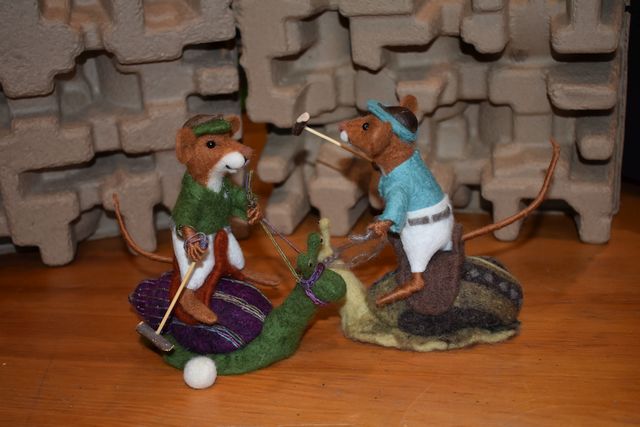 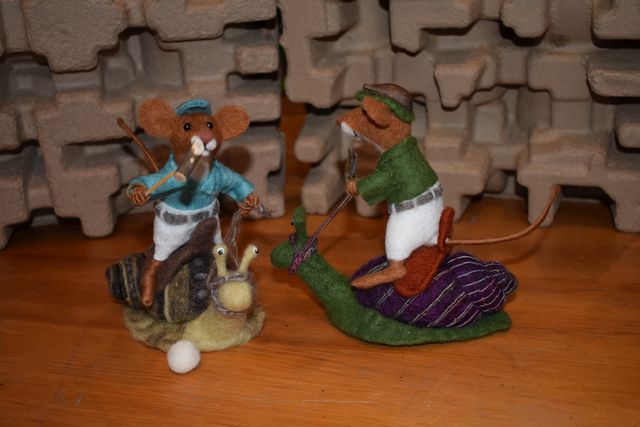 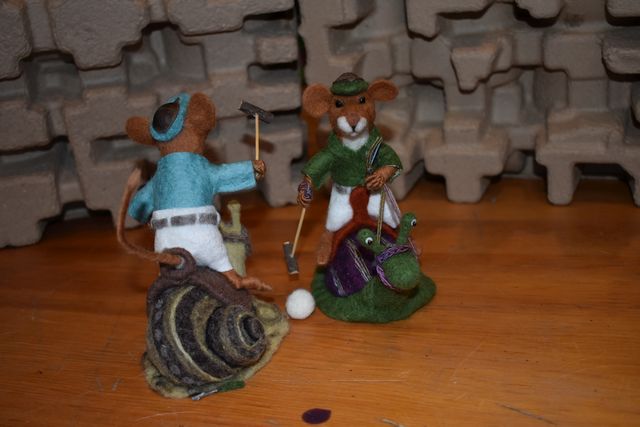 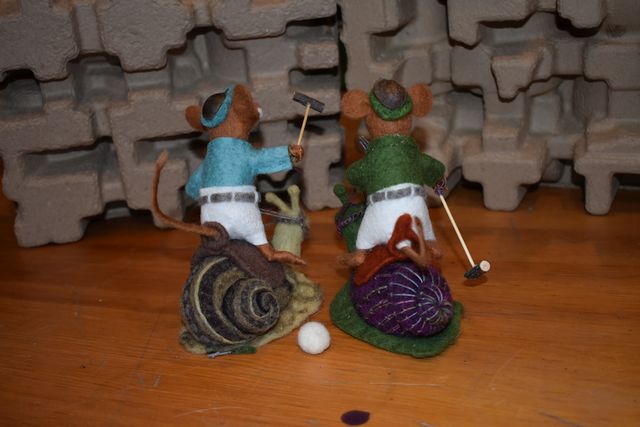 These are so charming and adorable! Also this looks about my speed for sport.

Am I the only one who imagines that Harlan has a big room set up like those model train aficionados with a whole landscaped world full of all these magical creations? That would be amazing. I would totally pay an admission to go gaze at such a thing. More than once.

They must be terribly patient.
They’re certainly cute!

Oh my goodness! So jaunty!

These are amazing, (as usual!) I particularly love the snail shells!

Am I the only one who imagines that Harlan has a big room set up like those model train aficionados with a whole landscaped world full of all these magical creations?

Thank you everyone!!! These two ended up being sort of a long project because there are really four of them not two.

These snails insisted upon eyes. The Holey Snail doesn’t need eyes because, being Holey, it is omniscient.

Snail saddles are interesting to make.

Jackson chose the “Thunder” name as being the closest to the sound cantering snails make on the field. I considered such names as PDQ Polo, Lickety Split Polo, and Supersonic Polo among others. When Jackson makes a suggestion, I listen.
Snails, btw, can travel at a speed of one metre per hour or approximately 0.03 mph. Don’t blink or you’ll miss something!

Polo mallets are shorter than I expected. Each had to be custom sized to mouse and snail!

I had envisioned using walnut shells for the safety helmets. Hickory outer shells worked very well and were free in my own yard, which isn’t a yard: it’s a forest.

Am I the only one who imagines that Harlan has a big room set up like those model train aficionados with a whole landscaped world full of all these magical creations?

I imagine myself that way too. I don’t have such a room, but I do imagine it!!

It would have to be a cat free room, especially a Tybalt free room. Tybalt is the one that had a fight with King Arthur recently. Tybalt likes to come sprawl on my work table and push my tools over the edge or start chewing on the thread in the threaded needles in the pin cushion which results in my having to check to see all the needles are there and throw out all the chewed thread. That was a run on sentence, but Tybalt is a run on cat. 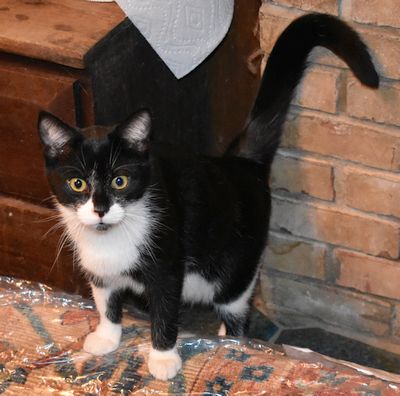 The other cats don’t mess with the mice. G e n e r a l l y .
It has to do with Tybalt’s name. Cats become what you name them and visa versa. If he had been named Temperance or Teetotaler, he’d never think about pushing tools off my work table and dragging innocent mice through herds of dust bunnies just for fun. But his name is Tybalt.

It has to do with Tybalt’s name. Cats become what you name them and visa versa. If he had been named Temperance or Teetotaler

Snail saddles are interesting to make.

I’m so glad I’m not the only one who thinks so!

Kidding! (Of course) I do imagine you have a jar of creature types, on small bits of paper, and when you are stumped, you pull one out to solve your creation problem! This one was an epic combination!

I love them! The snails remind me of the racing snails, seen in the Neverending Story.

I love them! The snails remind me of the racing snails, seen in the Neverending Story

I suspect, being a mother, that I did at some time see Neverending Story, but I have no recollection of it. I did once needle felt the dragon for a friend: 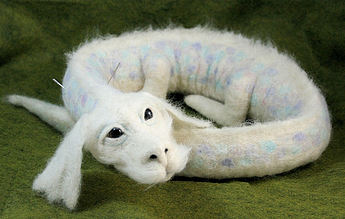 It’s one of those movies I remember loving as a kid, but when I watch now, I’m perplexed. It’s not actually a great movie. LOL. But the Luck Dragon is amazing! I love how you got the shimmery iridescent quality of his scales from the film.

Tybalt is adorable and looks full of energy! I love the snail shells. They are so detailed and cute. LOVE the snails.

I believe I used some silk in the scales which would be a better reflector of light. It’s been a long time since I made it!

Tybalt is adorable and a pain in the back side! He’s the insecure macho cat that has to pick on the others. He’s a Dennis the Menace of cats!

The snails shells are interesting to make. I probably should have taken notes on how I did them, but since I don’t anticipate going into heavy snail production probably not needed!

The purple one gave me the opportunity to use some fiber that my niece gave me a while back. It’s probably a Corriedale, and I almost exclusively use Merino. It worked beautifully for the snail!

Ah-MAZing! The snails are SO cute and I would totally watch this action-packed sport!! <3 <3 The colors are wonderful too