Sometime ago I bought Simplicity 8361 on a whim and recently I decided to take my first foray into millinery. I had a bit of cream dupioni that I found in the Joann’s remnant bin many moons ago and snapped it up because Joann’s never has real silk! I had no real plan for it, so it sat in my fabric bin for years. I don’t know that I would count this as a destash project, though, because I had to go buy all the trims. 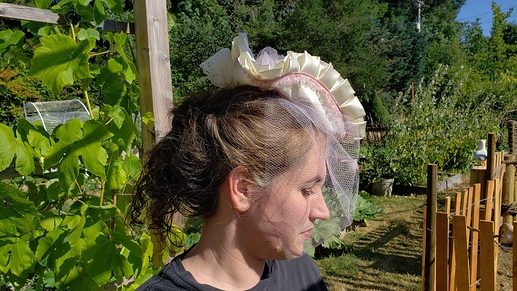 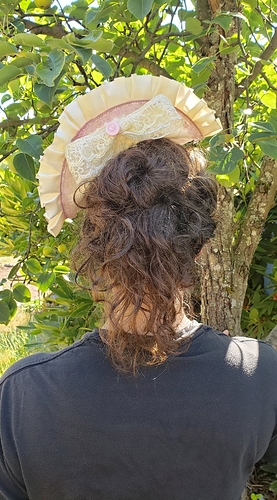 The construction of the hat was not too difficult. Doing all the embellishments took awhile. For one thing, my Joann’s has apparently decided to stop restocking anything and, as such, had no pleated ribbon. I bought a spool of wired ribbon and pleated the whole darn thing myself. I chose pink tulle and lace in the hopes that it would look less bridal. I seriously considered making this in black, but I thought that maybe I’d look like I was in mourning with a little black veil over my face. 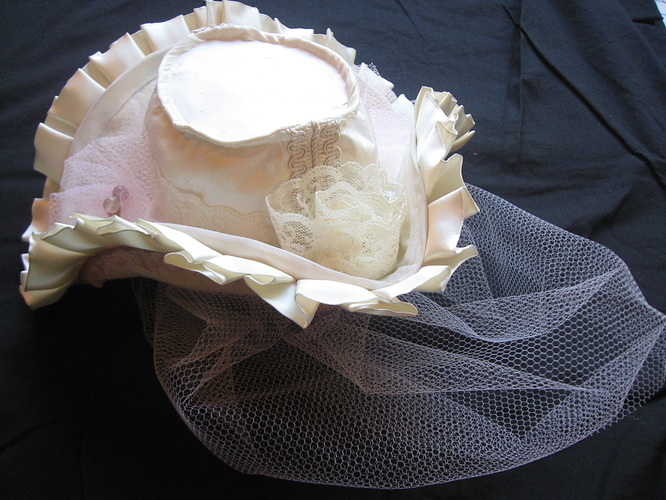 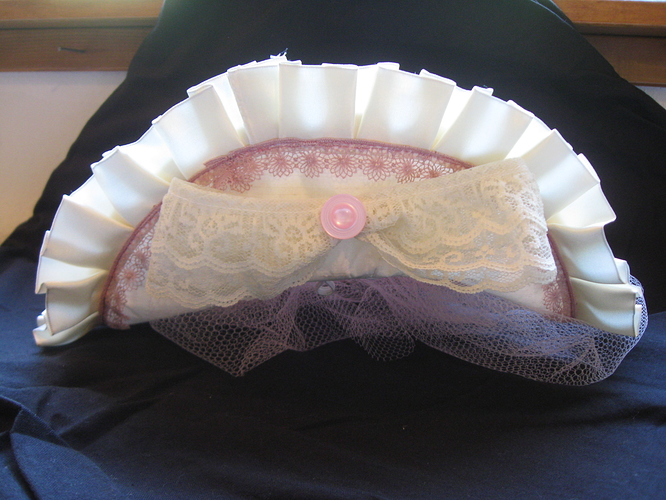 IMG_41091600×1200 437 KB
The veil is removable as you can see from the inside hat band. It’s just put on with little hooks and eyes. Once I am wearing the hat, though, the veil is part and parcel. You can also see the elastic loops intended to help make pinning the hat to my head easier. That is debatable. I may take that elastic off and do something different there. 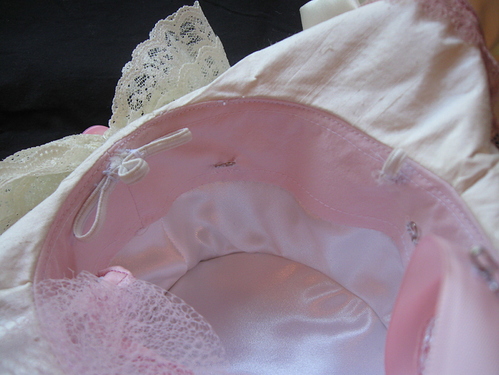 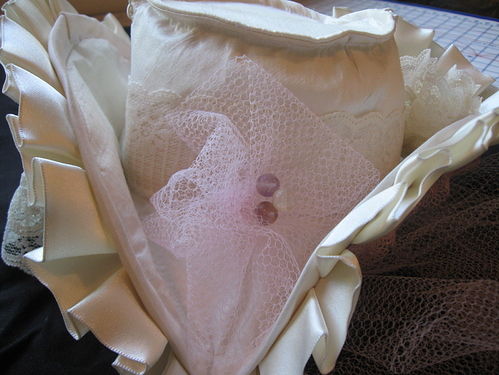 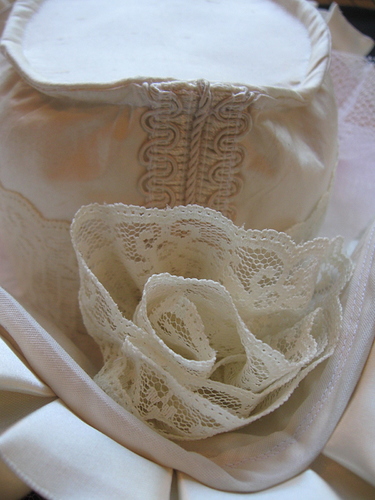 My kids all call it “the tiny hat” and were all very excited about the progress of this project.

DD#1 (14yrs) asked me what I intended to wear with it. Probably not my Guns n’ Roses t-shirt. So, I guess I’ll just have to address that hole in my wardrobe. 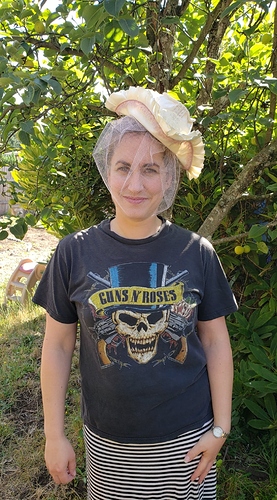 In looking at these shots of me wearing it, I think I may need to reshape the brim a little bit on the sides. Maybe not such a sharp bend. Hmm. Anyways, enough musing out loud. I bought trims to do a couple of the other hats on this pattern, so stay tuned for future hats!

Holy Moly that turned out great! I bet it feels good to finally work on a project and using fabric from your stash from ages ago! Well done on the pleats by the way. I don’t think this looks bridal at all although I happen to like the whole goth aesthetic so a black mourning one would be cute too.

looking forward to the whole ensemble!

Wow you made this?! I wouldn’t even know where to start. Incredible.

I actually love the juxtaposition with your G&R tee. A black one would fit right in with your outfit!

What a fantastic way to use up bits of trim, lace and that special silk fabric!

I like the tilt and the shape of this one…are there many to choose from in the pattern?

It turned out great! Everyone should have a tiny hat in their wardrobe for fashion moments

You look so beautiful wearing it! What a fun hat!

What a great hat, I love it!

a black mourning one would be cute too.

A black one would fit right in with your outfit!

Hm, there seems to be a consensus! lol This morning I woke up and thought that I chose the wrong GNR shirt! I have another one that I altered – cut out the sides and sleeves and replaced it with black lace. I should have worn that one with my tiny hat! I’ll see about getting other pictures and let you decide if that’s the winning combo.

Everyone should have a tiny hat in their wardrobe

are there many to choose from in the pattern?

There are three other styles – one with a rounded top and wide brim (kind of like classic straw sunhat, but they did theirs in velvet which makes me think of Blossom), a top hat with bat wings, and a truncated top hat with Steampunk accessories. I have some dragonfly brocade that I thought would be fun for the top hat and make dragonfly wings instead of the bat.

I like wearing hats, so now that I can make hats, I’m over here like Jasmine singing about a whole new world.

Thanks for the kind words, everybody!

This is very cool! Also, so digging that GNR shirt.

Congrats! Your Tiny Silk Tricorn is one of this week’s featured projects. Way to go!

Uh-MAZING. XD Can’t wait to see more hats from you!