Our house is primarily heated with wood via a woodstove in the kitchen. We’ve found that by using a firestarter and just a bit of waste paper we don’t need to use - and therefore, cut - kindling. YAHOO! 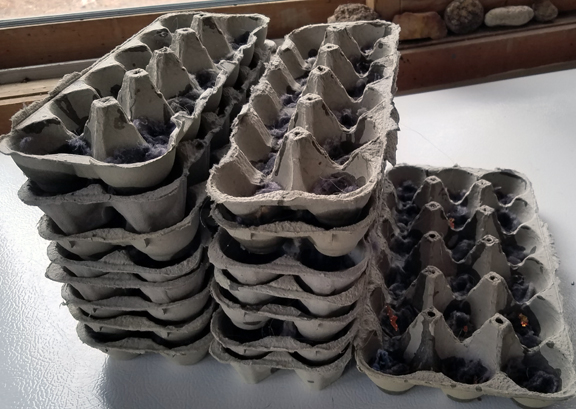 We just tear one section off for each fire we build. I learned after the first time that they take up a lot less space to store if you tear them off as you go. And once you get going there is definitely an economy of scale, so this batch is about 17.5 dozen! 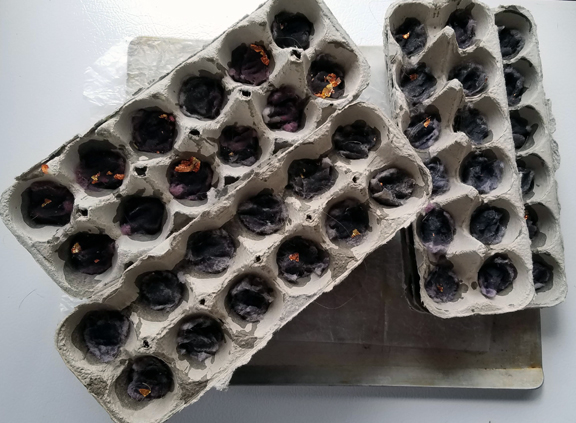 We’ve been using this method for about 8 winters. After pulling the top and the closure tab thingie off the carton, I stuff a small wad of dryer lint into each compartment. The first year I picked up a small saucepan at a junk store that I use as the top part of an ad hoc double boiler in which I melt all the waxes. Whatever is left just stays in there when I am done - it is the only thing that pot gets used for. I got a spoon at the same time that I use to add the wax to the egg carton sections - it stays with the pan and gets used for nothing else, so I just leave whatever wax residue on it. I have been using the same pieces of wax paper to protect the baking sheets that I set the cartons one for the whole 8 years! After each sheet (about 4 dozen starters) is made, I set them on the chest freezer in the mudroom to cool - it’s quite a bit cooler out there this time of year, so they cool quickly.

“What is that shiny stuff?” Well, that is metal leaf. “Why is that shiny stuff in your firestarters?” Because I went to a craft night where we made beeswax spheres that held LED tea lights and tried to metal leaf one. It didn’t’ turn out and to be candid wasn’t really a project I was all that excited about. I mean, they can be super pretty, but it just sat on a shelf and then in a cupboard since I made it. So I threw it into the pot!

Oh these are great! We made these back when I did more camping, I love them for their portability & stability & reliability! Does the metal leafing spark a color when burned?

Cool! Or, hot, rather.
I wondered about the colors, too

Nice! Do you find the paraffin burns better than the candle stubs? I hadn’t considered mixing waxes. And the compact storage is good thinking. I should follow suit.

@Lilyleaper & @steiconi I haven’t yet burned any with the metal, so I don’t know! I will try to keep an eye on that when the time comes, though, and report back!

@calluna We don’t burn a lot of candles, so the ratio of candle wax to parafin is pretty low and I have always mixed them, so I really have no idea about which might burn better! There is hardly any wax in each, so I know that it doesn’t take much. Maybe the wax helps the lint - which is super flammable - last longer? This batch has bees wax, soy wax, and parafin - mostly parafin.