One of my brother collects plush crocodiles. If it’s his choice or not is up to debate! He got the first one as a kid, and he still has it. So during birthdays and some christmases he has gotten a plush croc here and there.
And lots of personal stuff happened this spring/early summer, so he spent a month in the hospital due to mental health issues. So I decided he cant spend all that time there alone, and made him a tiny croc.

And when I showed it to my other brother he wanted one too! And who am I to deny my brother another plush of mine?

So I made him one too, and now I have finally taken photo of the second.

The pattern is a free one from MochiMochiLand, and its a fast and cute, and fun! project. Its worked in the round, so almost no sewing.
So if you want, you can hide a piece of candy (or whatever you want that is tiny) in his mouth, because its pretty deep. 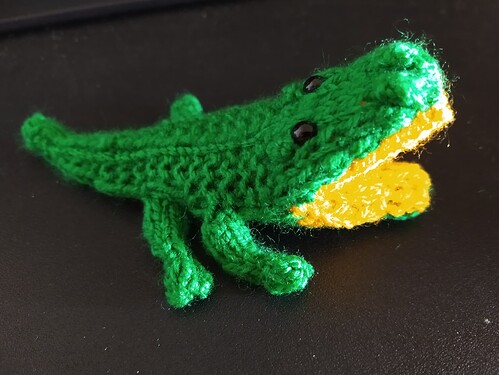 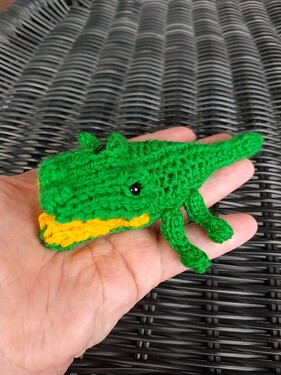 They would make anyone smile!!

I love this! Mochimochiland is the reason I want to learn to knit

So cute and tiny!

These are super cute! What a nice little pal to have around.

If it’s his choice or not is up to debate!

I can relate to this. It was for sure not my choice to have a music box collection as a child.

How fun and thoughtful! No wonder your other brother wanted one as well!

Your spectacular craft is one of this week’s Featured Projects!

This is so cute! I love it. With the ability to hide I piece of candy, it would be funny to add to an Easter basket too!