I have finally gotten to get back to work on a larger miniature project - a diorama - that will consist of a few-to-several miniatures that are projects in their own right such as this towel. 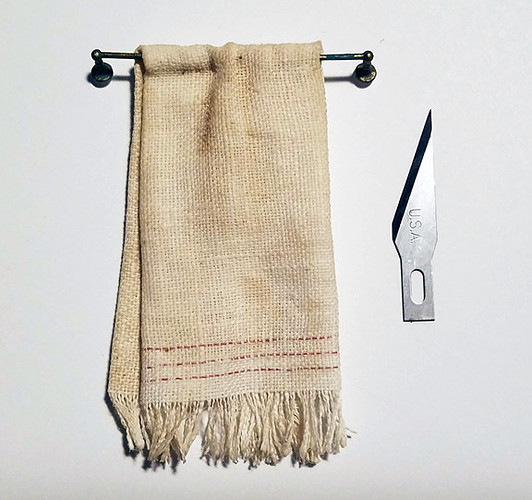 It was made to hang on this purchased towel bar using methods I learned watching the Bentley House Minis channel on YouTube. 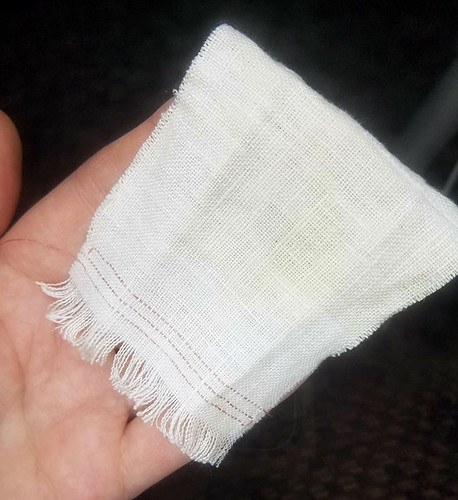 But before putting those to use, I made the towel using a white linen scrap. I used the time tested method of pulling a warp and a weft thread to make sure it was cut on-grain. then I removed some threads from each end to make a fringe. After that I used sewing thread to make little stripes at one end. 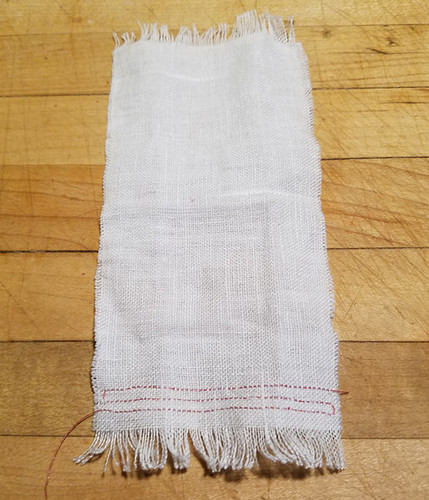 After that I tea stained it, hoping to get darker bits where I thought the towel would be most used. 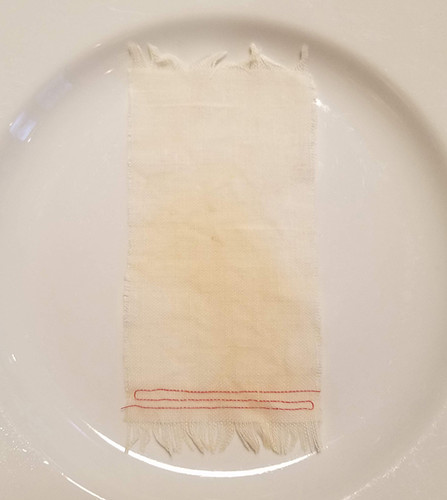 Then I used a mixture of Tacky Glue and water as a stiffener and formed it around aluminum foil (to keep it from sticking to itself) and pinned it to some foil-covered cardboard to keep it in the shape I wanted. It took most of a day to get fully dry. 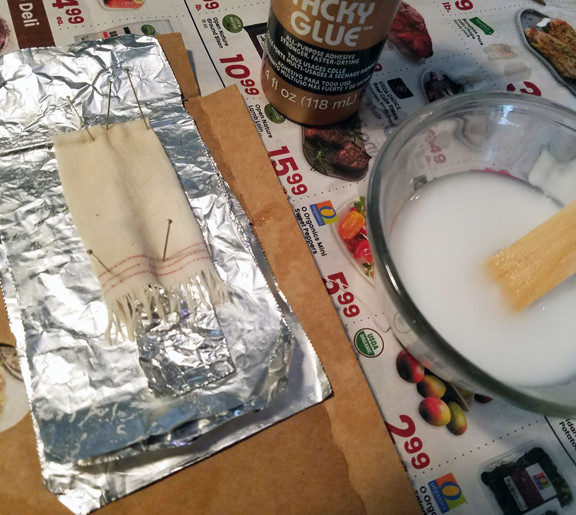 When this was done I realized that the part of the towel on the backside of the towel bar was too clean-looking. 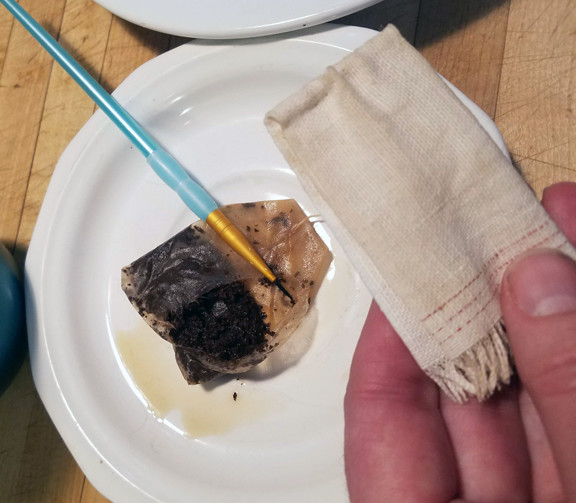 Since using a more typical tea staining method would be very wet which would undo all the shaping work I had done, I made myself a cup of tea, then broke open the bag and used a small paint brush to dry brush some tea onto that area. The photo below is probably the closest to color-accurate. 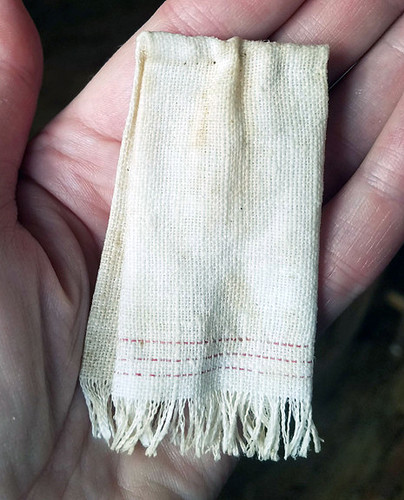 After that I added some more “dry” tea to the creases and depressions to give the towel more dimension. 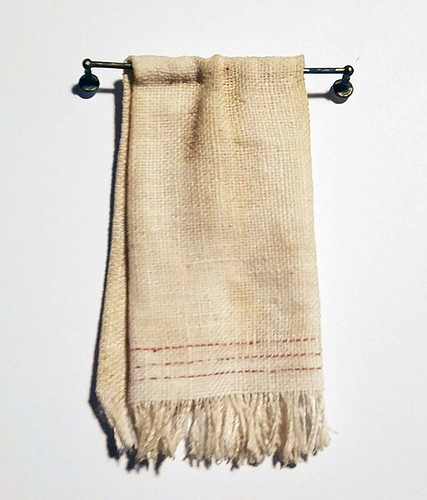 I may be adding more “things” to this as the project goes on, but I am considering this part of the project complete! 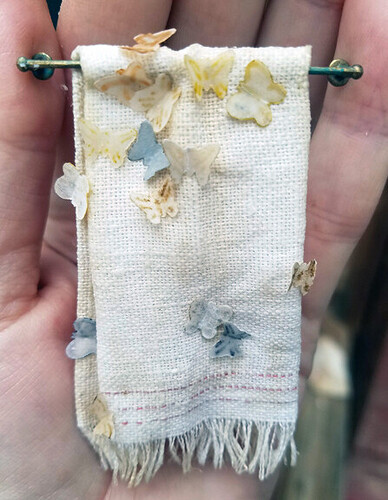 The moths are made from 3 kinds of vellum, punched with two different butterfly punches. Then decorated with Tombow markers & blender pen. Finally folded in half and glued to the towel.

Very cool! Such patience and dedication, too.
Many years ago, when I worked at a paint-while-you-wait custom artwork store, we used hair dryers or heat lamps to quickly dry the hand-painted items. Nowadays, when I need to dry something quickly, I’ll either use a hair dryer OR place it at the back of my stove. It gets really warm there when the oven is on.

You guys who do the miniatures amaze me. So cool!

@endymion I did set it up behind our wood stove, but with all the semi-tight layers of foil-gluey fabric sandwiched together it was bound to take some time. I actually have a for-painting-only hairdryer! But I needed no wind on this one.

So much work to make a dirty towel, lol. It looks very realistic and I am impressed by the amount of work you put into. I especially like the added stripes at the bottom!

I like the term “vignette”. Diorama makes me picture a recreation of an ancient battlefield awash in brown dirt.

@steiconi Interesting. Taking a moment to consider this, “vignette” brings “still life” to mind for me, like a bowl of fruit rendered in oil paints. After that I think Normal Rockwell-type images. This one may go the way of the later ever so tiniest bit and no may work its way into a title when that time comes. “Diorama” is very sentimental to me, reminding me of images of Natural History museum displays in textbooks and of shoe box projects from childhood on display in the library. Then I think of the Nutshell Studies of Unexplained Death which I LOVE.

Yes! I was wondering about words that might invoke battlefield imagery for me and thought that perhaps growing up in the Pacific NW where there really aren’t historical battlefields as such influenced me never really thinking about them unless I’m reading, watching, or listening to a history (or fiction) that involves one (or more) in some context.

I didn’t grow up near any celebrated battlefields, either, but from reading, I would nominate
Trenches, foxholes, no man’s land, “emplacements”, bunkers

I think we have different reading tastes!

Now I have a Pat Benetar earworm!

Larger and miniature in the same sentence made me giggle

Ha! And in this case the “larger” works in at least two ways. First the project itself is a larger one with many media and techniques with many hours. Second, larger scale than a lot of minis we see on the site at 1:12.

Very cool! Thanks for sharing the technique.