I recently bought some scanned images of 1950’s and 1960’s paper dolls. This weekend, I used a couple of them to create this retro Valentine decoration. 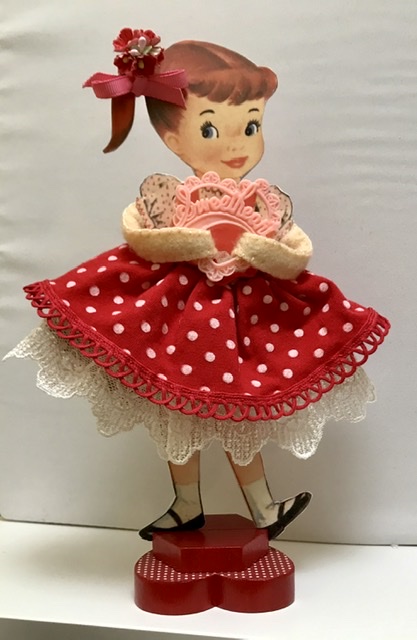 I’ve been seeing other people create similar little figures with chenille stems for arms and legs, using heads from vintage Valentines. I decided to try to make one using a paper doll.

Here’s a little tutorial and a few pictures of the process.

You’ll need:
Vintage paper dolls or images printed from digital downloads.
Cardboard, stiff enough so it doesn’t bend over
Patterned scrapbooking card stock
Chenille stem
All-purpose glue
Scissors
Craft knife
Mod Podge (I like matte)
Felt (try to match the color of the figure’s arms)
Needle and thread to match the felt
Wooden blocks or spool for base
Paints if you want to paint the base
Various decorations (fabric, lace, trims, little flowers, embellishments such as vintage cupcake picks, etc.) 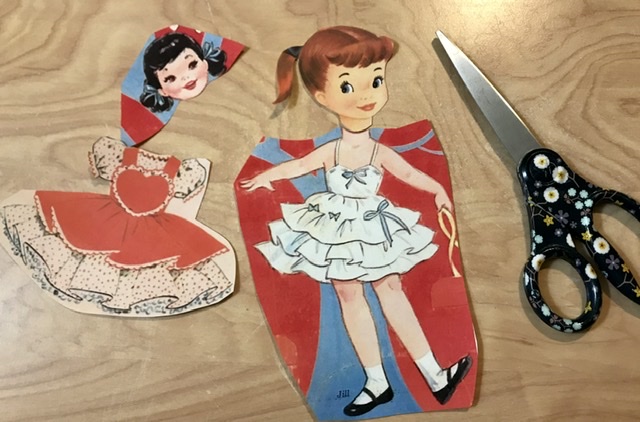 I wanted the head to be disproportionately large, so I chose the head of one paper doll and put it on the body of another. Cut everything out, including a cute dress. (I knew I was going to use something bendy for her arms, so I cut the arms completely off.) 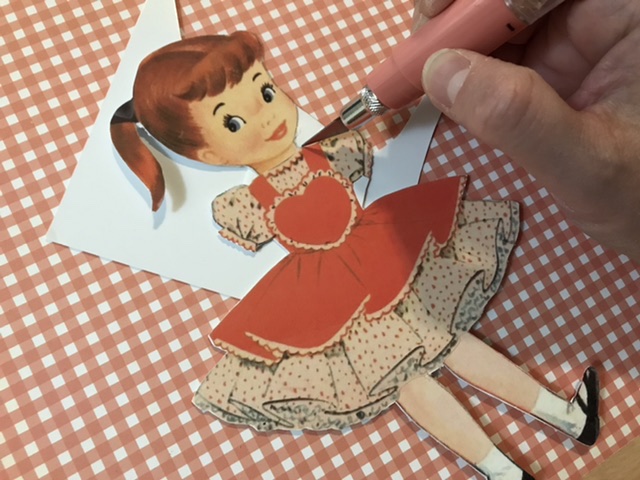 You can use glue or Mod Podge to stick everything on sturdy cardboard. The cardboard I used was white and acid-free, and stiffer than poster-board. Then cut the shape out of the cardboard, using a razor knife to get into the small areas. (Or maybe you could use something like a Cricut for this rather than doing it by hand.) I chose a cute gingham cardstock for the back. 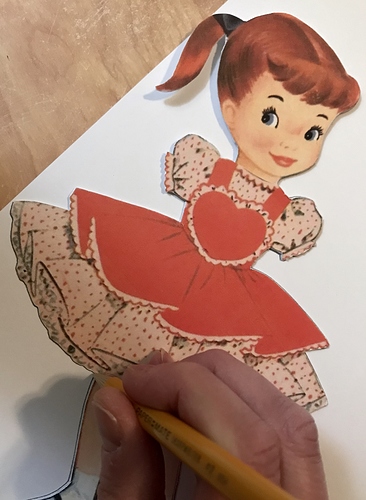 Place the cardboard figure face up on the back side of the patterned card stock. Trace around the figure and cut it out. Don’t put the back and front together yet, though.

Seal the front and back. I used a thin coat of matte Mod Podge. 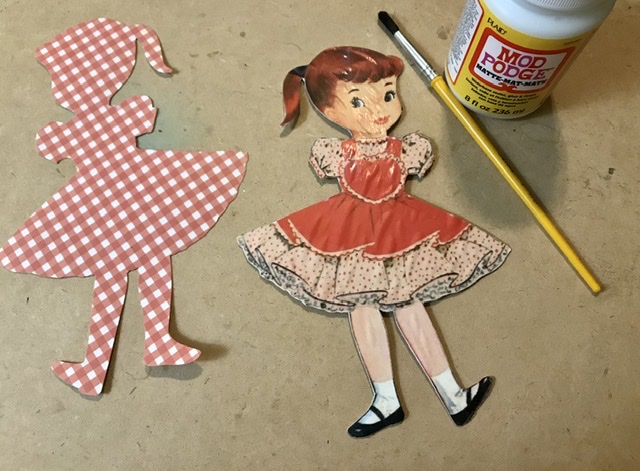 At first, I was worried because the figure got some bubbles on the surface. (I had just printed it on regular paper on an ink-jet printer.) Luckily, after it dried, the bubbles went away. 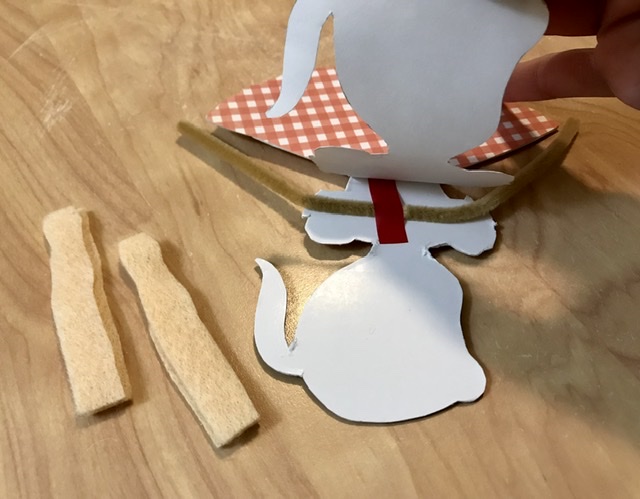 Next, position a chenille stick for arms, and tape it in place. Glue the bottom half of the figure to the backing, lining it up very carefully. Cut some felt into arm shapes (use the paper doll as a guide). Cut four pieces - two for the left arm and two for the right. They should extend into the sleeves about a quarter inch. 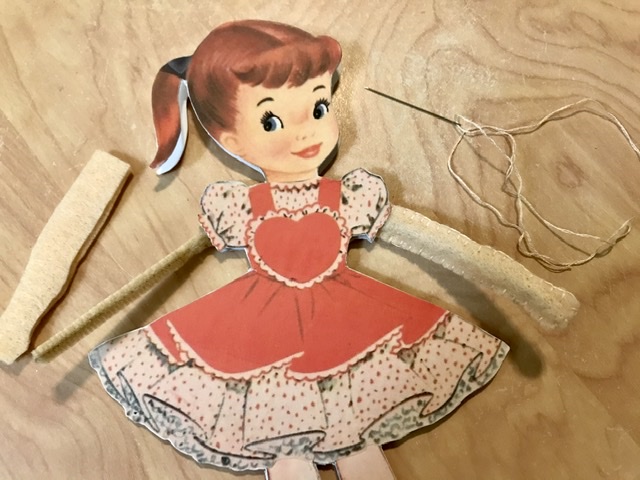 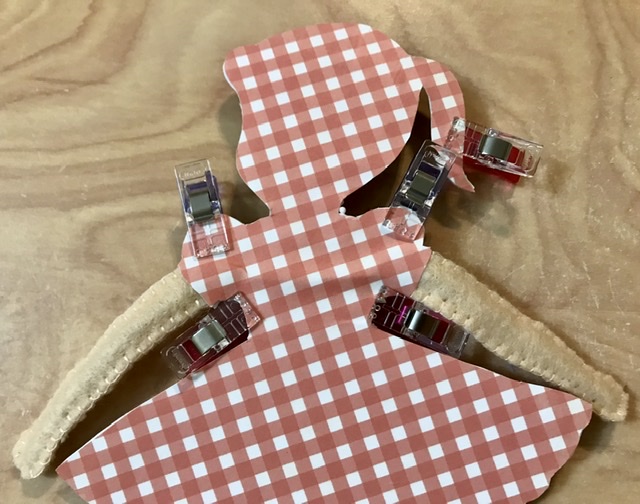 Then glue the top half of the paper doll to the backing, sandwiching the chenille stick in the middle. Use clips to hold the pieces together as it dries. (You may have to trim a little bit after it is dry.)

While it is drying, make a base. Use something with some weight, like a block or spool. 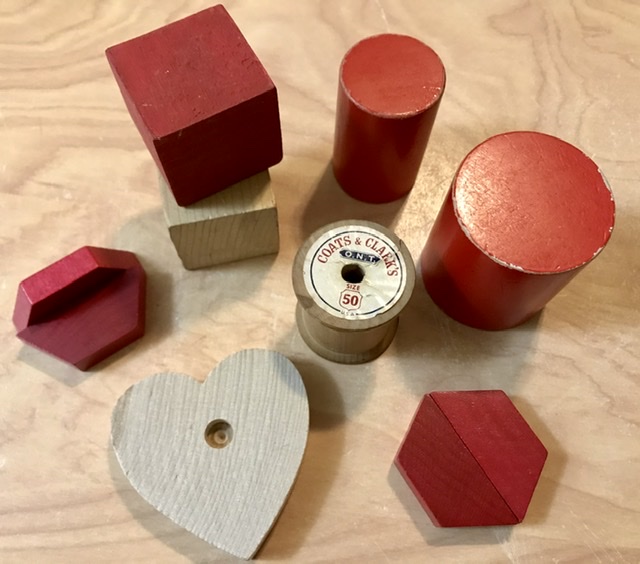 Cut a slit in the base, just large enough to insert the feet of the figure. I did not take good pictures of this part… and to be truthful, I did not cut anything. I glued two small half-hexagon-shaped blocks onto a larger heart-shaped block (which I’d painted and topped with Mod-Podged scrapbook paper.) I spaced the two smaller blocks just far enough apart to be able to insert the doll’s feet. You want it to be a snug fit so she stands up straight without leaning.

Once everything was really good and dry, I assembled and decorated the figure. Again, I forgot to take pictures of this part, but I gathered the edge of some lace and some dotty fabric to make a petticoat and skirt, put some flowers and bow in her hair, and stuck a plastic heart that says “Sweetheart” in her hands.

Be aware you might need to carefully coax her back into a flat shape if she tries to warp.

I’m not totally satisfied with the way the arms turned out. Next time, I might use fabric rather than felt.

Too cute! Thank you so much for the tutorial. Bookmarking for later!

So cute! Thanks for showing us how to make one

Great tutorial, and she is just DARLING…I won’t lie…I love her a little more because she was Frankensteined together from parts of other dolls lol. She is SO CUTE! Fantastic work!

She’s adorable! And I love the felt solution for arms over pipe cleaners!

That little girl with black hair, tho!!! She’s FUN! And needs a St.Paddy’s treatment for sure!!

Thank you for sharing your process! I never thought of using kids blocks.

this is so cute. I would not have thought to use fabric on a paper doll. it looks great.

That’s adorable! I love those vintage valentines, and I love how you used the image.

Adorkable!
Could you use her original arms, backed with wire and paper? Have to switch left to right and hide the hands…

Hey, that’s a good idea! I’ll have to do another one and see how it works. The back would look much flatter and nicer if there were just a thin wire running underneath…

Oh my goodness! Too adorable! Thanks for showing us how you created the cuteness!

Cute and so smart using fabric and so! Love the tutorial you made!

She’s so fun! Thanks for all the details — it’s hard to remember to photograph everything when you’re in the “zone.”

This is so adorable. Thanks for the lovely tutorial!

Incredibly sweet and creative, I love your Valentine Girl!

Wow, you sure put a lot of work into this loveable vintage girl.

This has to be the sweetest Valentine ever. Her little vintage bobby socks and that ruffly dress are too much! Thank for sharing your tutorial. This would be a fun craft for kids!