I had fun making my very first ATC’s this round of the Ongoing ATC Swap. I had plans of using up my scrapbook-y type stuff but then when I saw people were posting more art-like ATC’s I switched gears.

I can do “art”, I just never do. It was nice to stretch those muscles again.

For the first two I used my tried and true watercolor-then-outline-everything-in-ink method.

This one was made for @reinikka and had her coffee theme. I had so much fun making that little mug rug and I really like how the coloring of the coffee cup turned out. 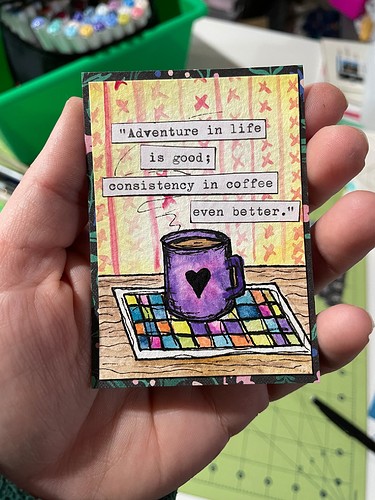 The next was a “Victorian Haunted House”. I enjoyed how this one turned out too. I felt like both cards were lacking something so I cut them a tad smaller and mounted them on scrap paper. 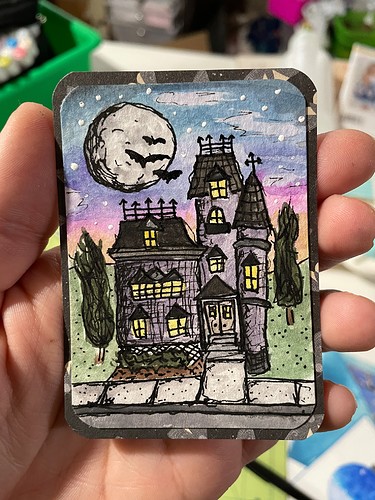 After those two I realized how much I really enjoying playing around with watercolor. So then all subsequent cards were watercolor as well!

I started watching random YouTube paint-along tutorials to try to learn some things. This is one of the first ones of trying to do fancy, real watercolor. 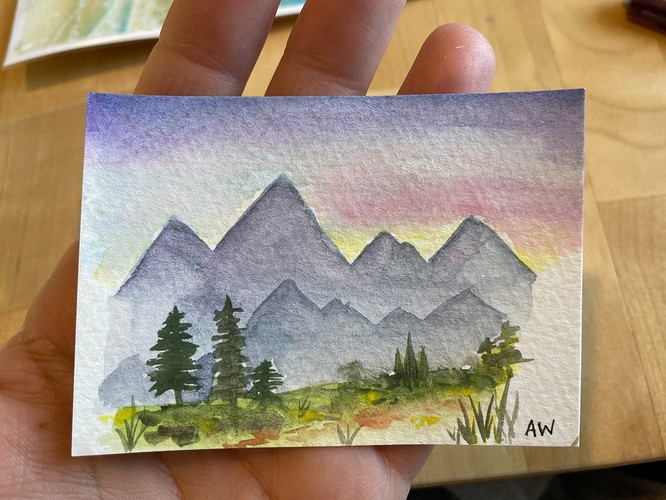 And then I did these two where you masked off the edges and made two paintings in one. I was drawn to do these two because it was in the middle of all the snow and ick and I was dreaming of warmer places. 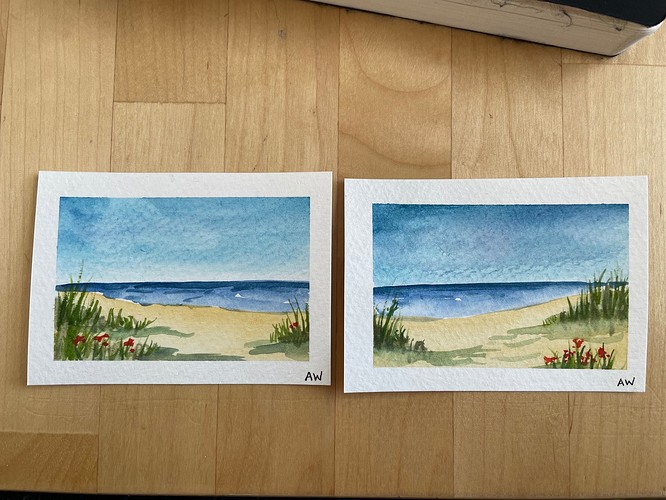 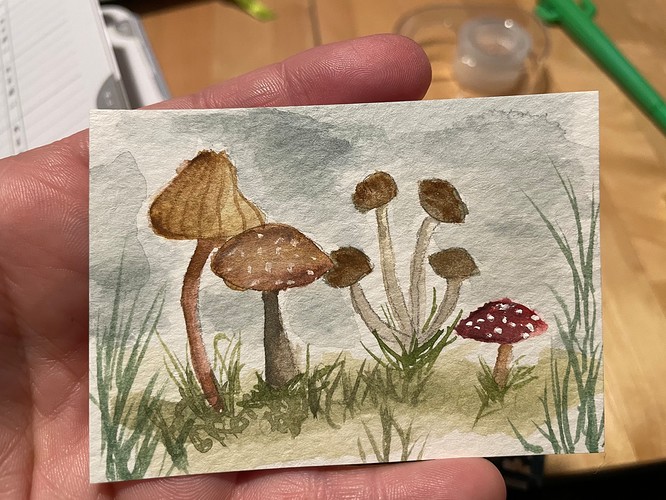 I thought this one looked fun to do as well. (Another youtube video tutorial.) This one found its home with @lynx2lancer for her “winter landscapes” theme. There’s a bit of mess up with the “snow” on the trees but i couldn’t fix it. Lol. In all the paintings they used gesso (which I’ve never used and don’t have) so I used some old arylic paint that I had. Worked good enough. 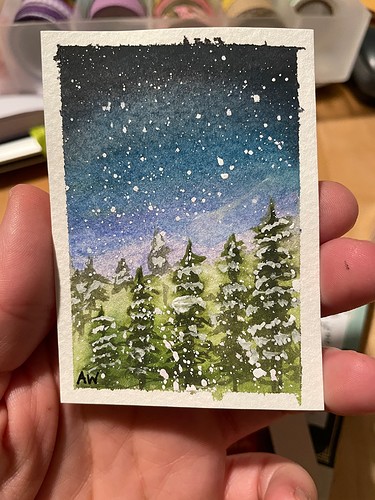 This is the first one that I went “off book” for (no youtube tutorial). I picked @curiousfae’s Wheel of the Year theme and chose Ostara since that’s what was coming up next. I looked up traditional symbolism for Ostara and sketched out a layout that I could incorporate all those things. It has traditional spring flowers (daffodils, tulips, hyacinths), birch trees (which I learned are the first to get greenery), a bunny and eggs to symbolize fertility, and a hot cross bun. I don’t know much about hot cross buns. I vaguely thought of them as a Christian symbol thing, but I didn’t really know. But I learned they have Pagan references as well (as most Christian things do):

Think of it as a Celtic Cross, the four equal armed cross of balance within the circle. You have two Equinoxes crossed by the two Solstices, the four seasons, the four Sacred Directions of North, East, South and West and the five elements of Earth, Air, Fire and Water with Spirit at the Centre. The circumference represents the cycle of the year, the circle of life, with the still point of balance at its centre. (Brazenly lifted from Glennie Kindred’s book of ‘Sacred Celebrations’).

And now we have learned a thing, right? Maybe I’ll try to make some this year. I’ve never had them. Other than my daughter’s recorder practice of Hot Cross Buns they never really cross my mind much.

Anyway…too much talking. Here’s the card! 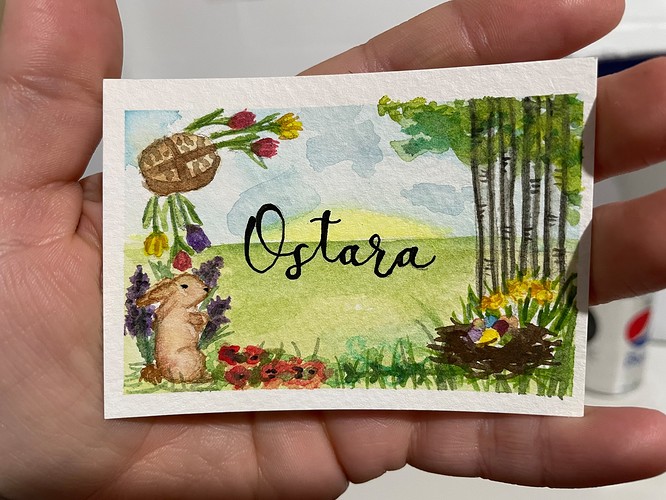 I felt pretty good about myself trying a watercolor not from a video tutorial I decided I’d step it up a notch even further. I was intrigued by @reinikka’s theme of waters/river, but especially the Metolius River. I had never heard of it but as soon as I saw pictures of this place I fell in love and now want to go there. I looked for a picture I felt I could base a painting off of and settled on this picture: 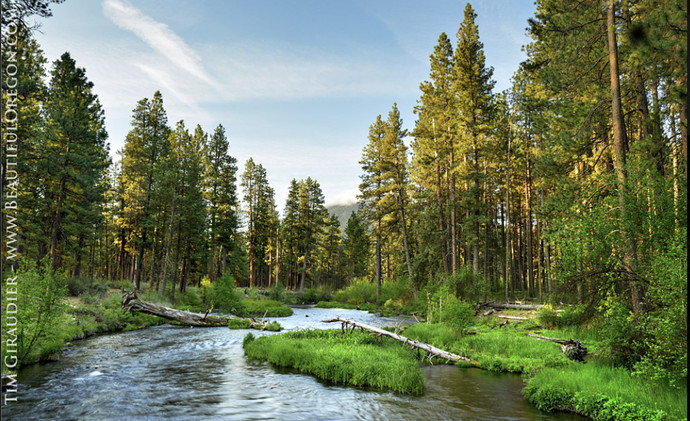 Isn’t it gorgeous?!? So…off I went to attempt to recreate it and I felt so proud of myself. Here she is (in progress since I apparently didn’t take a finished shot, but it’s mostly done here.) Then it took forever to get to her and I got worried but she finally got it! 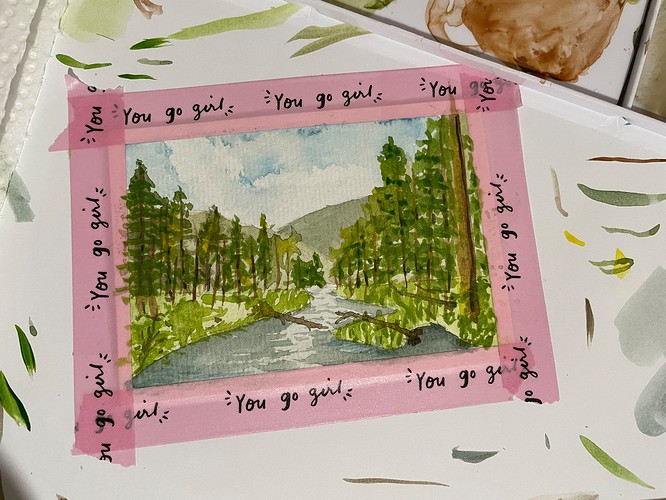 Lastly, we’ve got some Pokemon for @roler! I made her two because I figured since I already had colors out and mixed for Bonsly, I might as well make the evolved version as well! 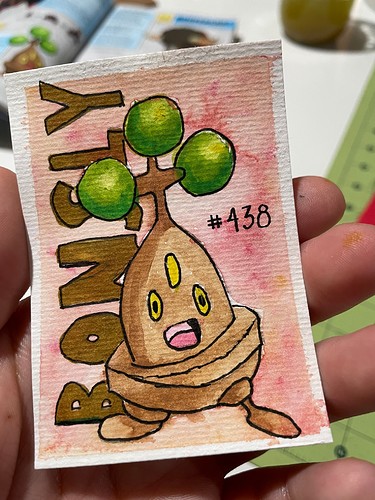 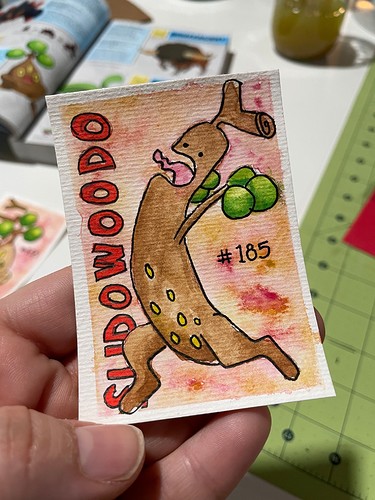 I’ve found a new love with watercoloring thanks to the ATC swap and definitely plan on doing more of them. I really like the ATC size because it seems so much more manageable when it’s something tiny.

These are all super impressive! I love mine! So glad you joined us in the atc swap!

Your first batch of atcs turned out amazing! Totally impressed by your skills with watercolor art!

You really knocked these outta the park! Any tips for getting so much detail in such a small space?

I honestly don’t know, but I learned a lot by doing those follow-along paintings on YouTube. I learned a new little technique or trick on every single one I watched and it gave me a boost to try some new things. Plus it helps when you don’t know what to paint. They give you your subject and already figured out the composition for ya. Lol.

Thanks for the kind words!

Very nice work, Alex, but it is obvious that you have underlying talent already and are just learning more techniques to help you translate that talent better…they are all lovely, but I especially love the snowy trees!

Oh wow, so many beautiful little works of art!
I love all of them.

You did such an amazing job on these. Well done!

WOW! What a great group of ATCs!

These are all so impressive! Loved seeing your process as well. And I love my silly Pokémon! They’re so cute!!

All of these are simply amazing!!!

These are stunning. I love every single one.

I need to learn more about watercolor too. I’m not nearly as good of an artist as you are though!

I think you’ve found your calling! The Victorian haunted house is so intricate! And I love the nature ones

Here’s a finished picture of The Metolius River, feel free to save it and use it as your own if you want. And I can try to get a better one or a scan if you want 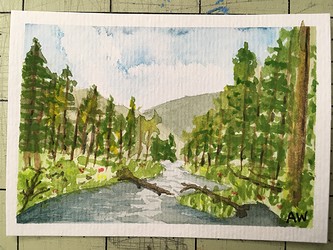 These are absolutely amazing! I think the haunted house may be my favorite, but I’m partial to little houses. I’m so in awe of your talent.

You should be proud!!! These are AH-MAY-ZING!

The Victorian Haunted House. Seen the way it should be - embracing the best holiday ever!

These are absolutely beautiful. I adore each and every one of them. Your partners must have been thrilled to get these. I know I would have been.
I admire your watercolors skills too. I can’t get these to work for me. You work them beautifully.

Amazing. It’s hard to believe they are the size of a playing card. So much detail, just wow!

These are amazing! Watercolors always look so effortless to me, but I know from trying myself that they are anything but! Great job!