I love hats and have always wanted to try making a pillbox hat. :3 I read a bunch of tutorials, but in the end developed my own method and went through four iterations before getting a very clean finished result on my 5th attempt - which is the one that ended up with the decorations on it. I took step by step photos while making the final version of the hat but haven’t had the time to edit them yet (and I’m still deciding how to present this tutorial). 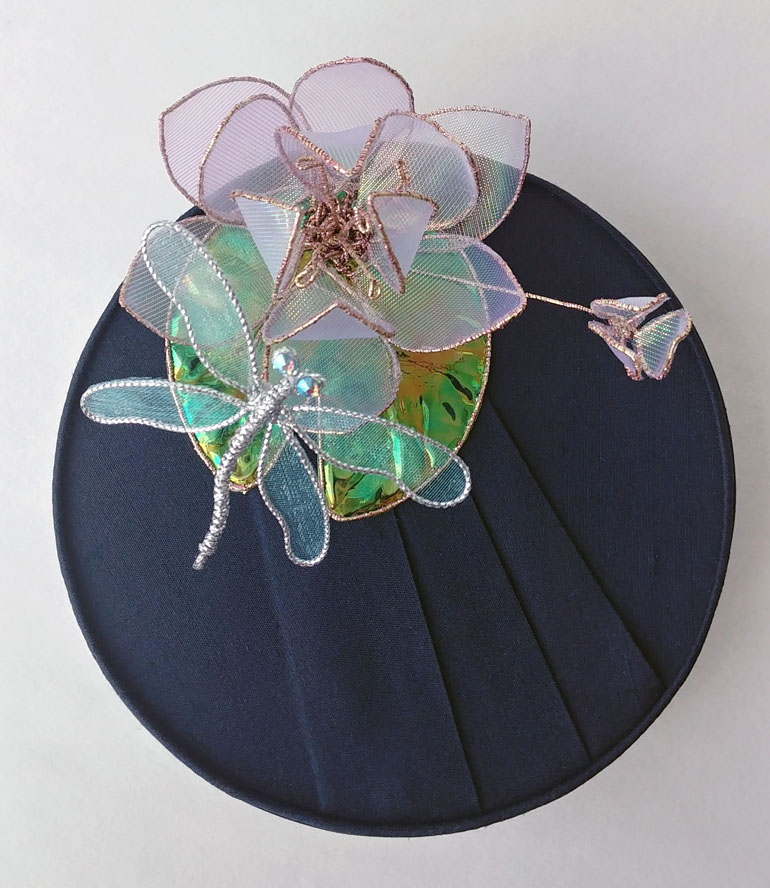 I love waterlilies and lotuses, and I’ve been wanting to do a new piece with a dragonfly in it, so the design was easy enough. I actually have a sternum tattoo of a lotus (technically it’s the silver imperium crystal from Sailor Moon in its lotus shape) so I treat water lilies and lotuses as a kind of personal symbol. 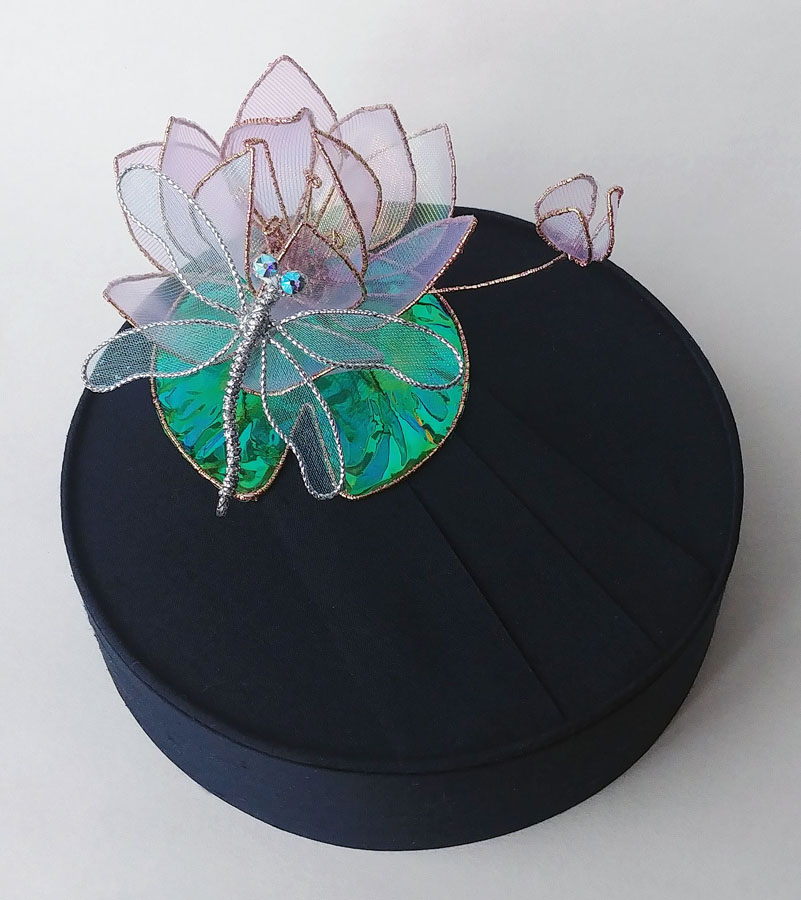 Since I’m not fond of sewing, I didn’t do any sewing to make this hat. The hat itself (not counting the four test versions) took about 5 hours to make. The waterlily, lilypad, and dragonfly probably took twice as long to do, so around 15 hours altogether.

The hat is covered with navy blue silk dupioni I bought more than a decade ago; it was the first material I ever made a kanzashi project with, but I bought quite a lot of it. I still have some left, and I’m trying to decide how to use it. 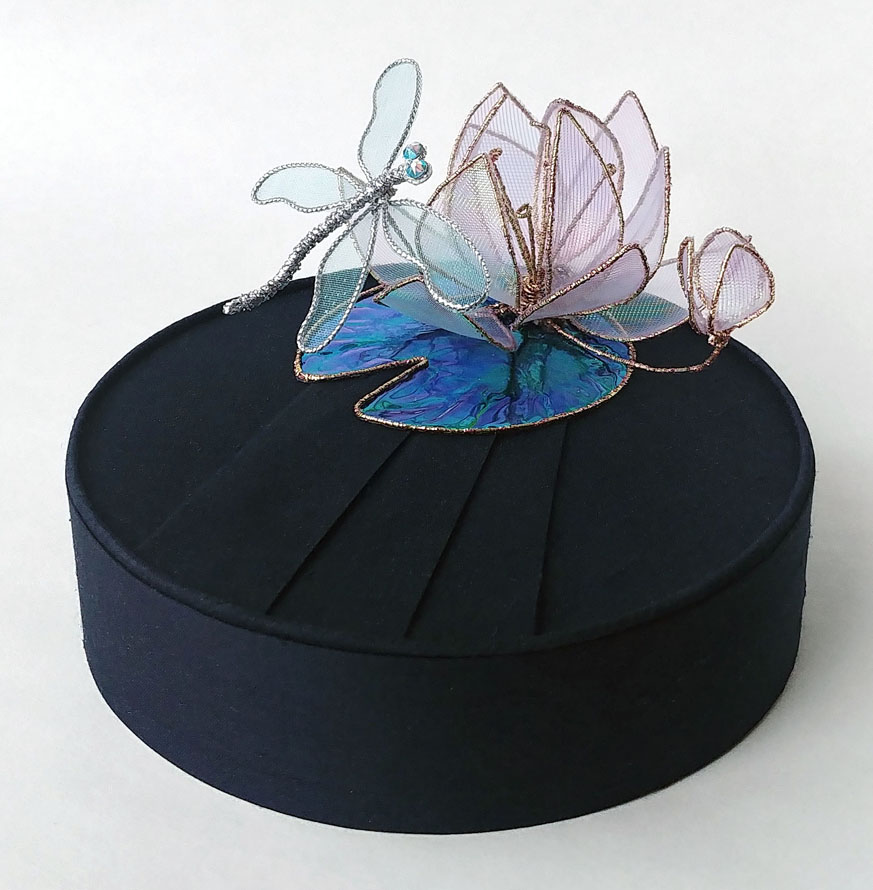 The lilypad is rosegold glitterwire with fantasy film that shifts colors depending on the lighting and angle of view, and the waterlily is made of the same glitterwire and an iridescent purple/pink/yellow organza.

Using wire and fabric to create flowers and dragonflies is a popular kanzashi making technique, and I pair it with tsumami craft projects regularly, but this is the first project with no tsumami craft at all - just wirework. 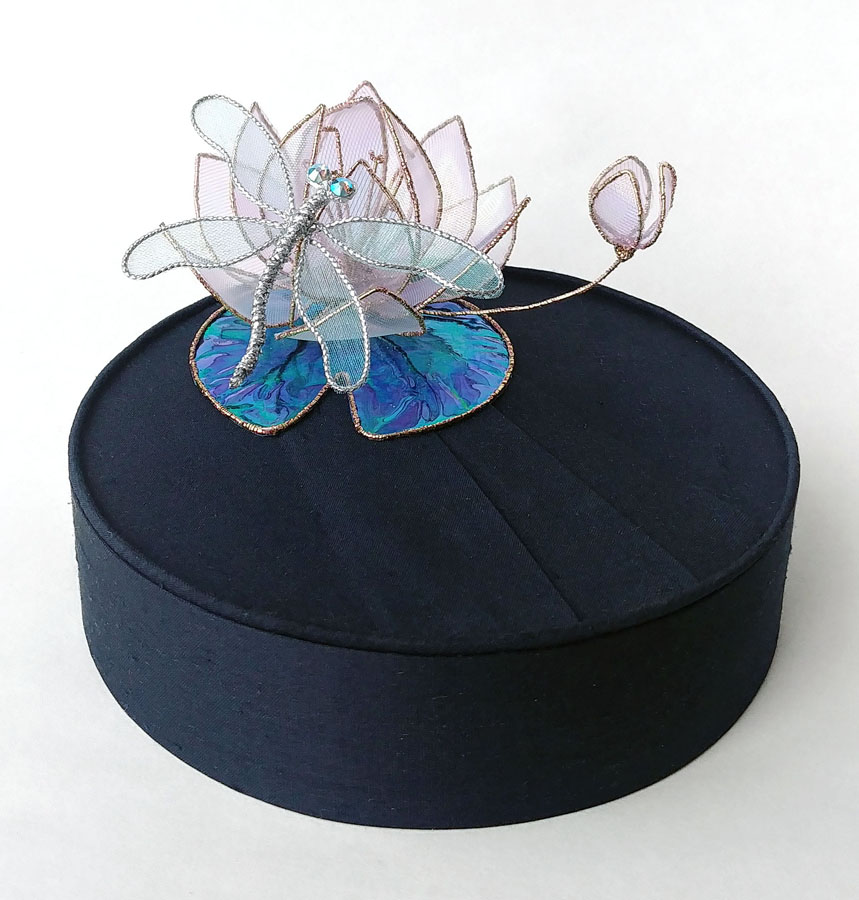 I also have some cute sewing tags that I had made eons ago when I thought I might want to try sewing again. XD At least I found a good use for them now on the inner brim of the hat. I also have a comb that I feed the teeth through the interior lace edging in order to wear the hat (not pictured), but you could also put hairpins through the lace or attach elastic.

That turned out so great! I love how crisp and clean it is, and the lilypad/dragonfly detail is perfection. Amazing job!

Absolutely glorious! I look forward to reading about your construction methods when you get to doing the tutorial.

Absolutely stunning and although I will never make one I can’t wait to see your tutorial for this. I always enjoy seeing the process of how something so amazing comes together

It is so sweet and fancy.

Absolutely LOVELY! Chic and elegant, simple and yet full of detail. Beautifully done.

It’s simply gorgeous, you’ve done an impeccable job with the hat itself and, of course, the embellishments are stunning.

Both the lotus and the dragonfly symbolize change, transformation, self-realization, emotional maturity, and understanding the deeper meaning of life. Good things to wear on your noggin’!

I look forward to seeing your no-sew technique, sounds interesting.

I love this, beautiful!!

Gorgeous! I love pillbox hats and the fascinator is to die for.
I‘m looking forward to seeing the tutorial.

Congrats! Your waterlily and dragonfly pill hat is one of this week’s featured projects!

Pretty! The precision of the hat with the whimsy of the lotus and dragonfly are such a fun juxtaposition.

Well, this is all sorts of amazing. Congrats on the Feature!