Weird Stuff from My Brain (and a Squirtle): February Swap ATCs

My swap ATCs have all been received (finally; pretty sure Squirtle walked there), so here they are. Two-thirds of them are born out of the odd things my brain does, so heads up for some TL;DR background stories.

I drew a Squirtle for @roler’s Pokemon collection. Drawing isn’t my normal skill set, but I was pretty happy overall with how it turned out. The book page was from The Chicago Manual of Style, 15th edition; the background is from a calendar page. 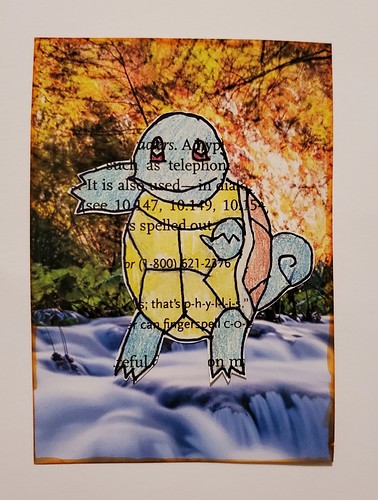 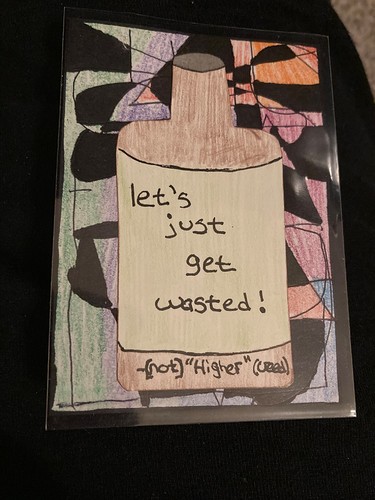 Turns out it’s actually “Let’s ask, ‘can we stay?’,” which I found out while researching this card. I always figured my version couldn’t actually be the words, but 20+ years in it’s probably too late for me. (Side note: In looking up the lyrics, I discovered I’ve also been legitimately mishearing the second verse forever. It’s a good thing I’m not attached to Creed.)

:cf, because I was so excited to get this one packed up and out the door that I forgot to take a picture.

When I saw @fluffypants’s “weird dream you had last night” theme, I knew I had to take it. The night before this swap started, I had a dream that my friend was trying to get me to watch some trashy reality show she was into called _____ Family Reunion (the first part was quickly lost to me the next day). In it, a guy named Boone Calhoon was in a feud with another guy named Turs (pronounced “Tube” through the magic of Dream Logic). Part of said feud involved Boone telling Turs that everyone calls him Turf Durf behind his back. Also, Boone is 10 years old; that’s not really significant except that it was a specific detail in the dream. Anyway, this card is representation of that dream/feud. (Disclaimer: The Twitter handles weren’t part of the dream. I made them up for this card w/o confirming whether they’re actually in use, so any resemblance to any person living or dead is entirely coincidental, etc.) 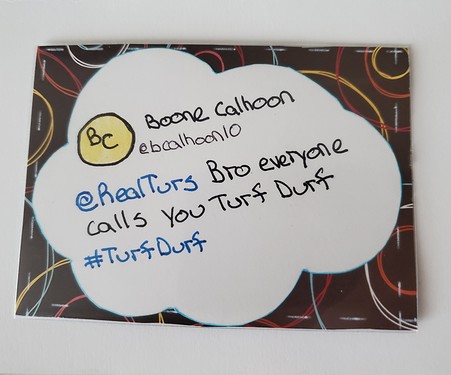 Thanks for looking/reading my novel!

I love your Squirtle card!

ha! i am going to link to this on the act post. those misheard always make me smile!

those misheard always make me smile!

That theme has never failed me as a recipient, but I think this is the first one I’ve ever made. I have so many more ideas now, though.

The Squirtle one is cute and I like the way you used the book page to draw on. It’s a cool effect.