What else can I put through an inkjet printer?

So, I was looking into ways I could get a digital image onto a canvas (sidenote: the most common method that the internet suggests, the modge podge method never worked for me. Dunno what I did wrong). Anyway, I discovered that you can make fabric go through a printer, like paper does, if you iron freezer paper onto it, so you can print directly onto fabric, then stretch that fabric over a canvas.

Unfortunately, my printer cartridges are empty. Those things ain’t cheap, so I was looking into refilling them. The boring option is that you can get them refilled for about half the price of a new one. But you can also buy refilling kits on the Internet, and do it yourself. That got me wondering if you could fill the cartridges with something other than standard printer ink. Like, what about waterbased paint? Make a printed painting? Just a thought.

While we’re on it, what other materials could go through a printer? Like what else could I print on?

You’d have to be certain that whatever you put into those cartridges had the same viscosity as ink jet ink and whatever happened you’d definitely void any any warranty you might still have.

I’ve seen people print on tissue paper and of course there is also transparency sheets.

You have canvas to print on. So you only have to put it on a frame
You have linnen of 380gr and it goes through my deskjet without any problem if you in insert it with manual insert.
there is also a kind of canvas paper: it’s not pure linnen but a mix and it’s cheaper.

I’ve seen people print on all kinds of paper; some need to be backed with freezer paper for stiffness, but others might be too thick.
I’ve painted computer paper, let dry, ironed it flat, then printed on it. Nice crisp black lines on a watercolor background. (Can’t print first, of course, the ink would run…) Haven’t tried watercolor paper, but canvas might work the same way.

I use the generic ink refills recommended for my printer. Make sure you know which hole gets which color; I’ve messed up more than one cartridge, and the only solution is to buy a new one.

Usually you can iron parchment paper to the fabric to run it through the printer.

Also if you are trying to get the image onto canvas another way is with am opaque projector. I used to use them to enlarge my drawings onto big panels to paint them.

True story about my printer… i was comparing prices of new and second hand ones, when my wife asked me to mail some letters. We were driving somewhere, and she stopped the car by a mailbox. I got out, and there was an office printer, sitting on the sidewalk, right under the car door. Just missing its cables, but it does do wireless.

It was in the 600 dollar range when it was new.

The universe provided. But i would be very surprised if the manufacturer was willing to honour the warranty.

Now you have me curious…I run across old printers all the time…most are no longer compatible with computers so people just dump them! The copier part works just fine…I did some YouTube searches and found homemade “ink” using paint…I bet even if the colors run, they would make for interesting backgrounds…hmmm…let us know if you try this…this opens up a lot of possibilities if you are willing to potentially lose your printer! lol I won’t try it on my office printer for sure!

I bet there’s a way to make those old “non-compatible” printers work. It would be a kludge. And honestly, I have no idea how, but it’s the kind of problem that gets my weird mind going.

I will definitely try painting on the paper first! That’s a fantastic idea!

I’ve come across those printable canvases. But they were a one-off in a discount store. Never seen them since.

So, are you saying that 380g linen will go through the printer, even without the freezer paper backing?

in mine it does 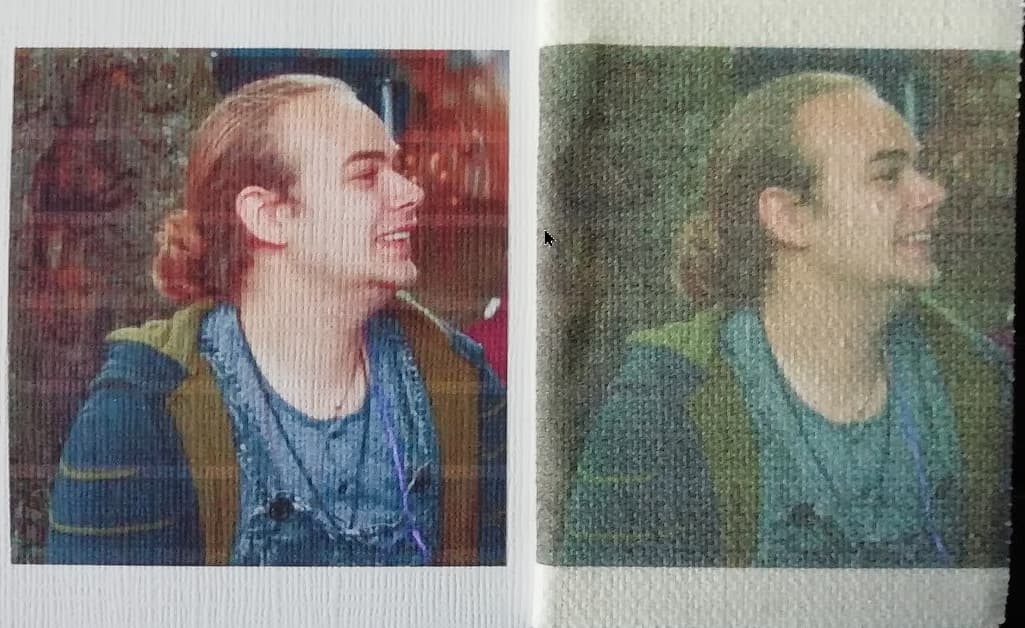 begin rant…
Computer stuff goes beyond planned obsolescence, into engineered obsolescence. Updates are designed to slow computers, so you upgrade to a faster one.

I have Photoshop 7, which was working fine on my Windows 10 computer until a couple of years ago. They did an update, and suddenly my expensive software was incompatible. I googled and implemented the suggestion, and can use PS once again, though windows keeps treating it like an alien invader; “Are you SURE you want to load this unidentified program?” Why doesn’t it work right any more? I’m thinking Adobe and Microsoft came up with a plan to sell more software.

My Chromebook used to run Linux until an update, now there’s not enough storage for the linux program, even though I wiped the entire computer to new status.

The deal with printers is REALLY annoying; they sell the printer itself at a loss, because they make a fortune on ink. I read that an ink cartridge costs something like 27 cents to produce, and they sell it for a huge profit. They put sensors in the cartridges so the printer can tell if you don’t use one from the same manufacturer* and they know if you’ve refilled, so they pretend it doesn’t work any more. Google is my friend, and tells me how to fix these things.

*coffee pod machines do the same; you can pull the sensor off an old pod and put it on a generic one.
/rant

YES - my bad - I blame covid for the brain fog

Back in 2017, no less than the United States supreme court ruled that they can’t stop you from doing what you like with your printers and cartridges; and the same principle applies to Keurig machines. Basically, they can’t dictate how their product is used or modified, once it’s sold to you. Sure, they can use those single-use chips that stop things from working more than once, but if you find a way to circumvent those chips, they can’t stop you. There’s no legal basis, or legal enforcement mechanism for engineered obselesence. 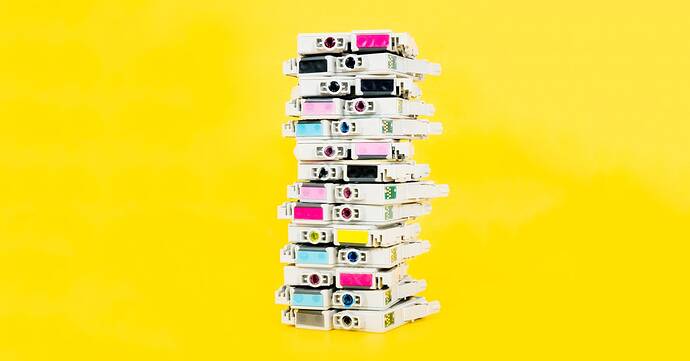 Impression Products vs. Lexmark International is an important ruling that clears the way for small businesses to fix your stuff.

The precedent went back 100 years before, when Thomas Edison tried to insist that film projectors he sold could only be used to show films filmed with the cameras that he sold. Filmmakers who refused to comply tried to get as far away from him as possible by moving to a remote Western town called Hollywood. If it weren’t for Thomas Edison’s corporate bullying, all that Hollywood money would be in New Jersey. 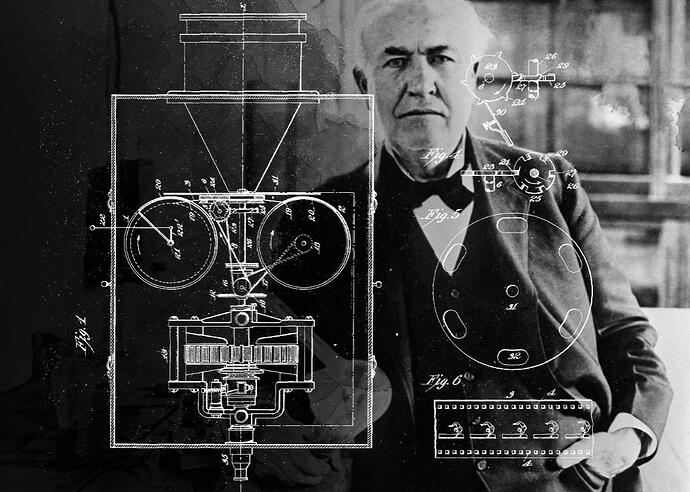 Given it’s something they don’t want you to do, there’s this really satisfying feeling of sticking it to the man, when you get all the use you can from these products. At the risk of being a big polllyanna, if you’ve still got Photoshop 7 working, I’d be kinda proud of that if I were you.

Speaking of… I would be surprised if there was no way for your Chromebook to run Linux, just because of one update. Have you tried reducing the size of the Linux partition?

When it first became an issue a couple of years ago, I did google-fu like crazy, and tried a bunch of things. I don’t remember most, but I seem to recall something about partitions.

I was only using linux for one app, and found a slightly inferior substitute in a free online app. So I’ve moved on functionally, but am still bitter.
But you know, it periodically warns me its going to delete files whenever it likes; maybe I should revisit partitions and see if I can find more storage.

Hot damn! Thanks for the tip.

When you run Linux on a Chromebook, you’re basically running two operating systems on one hard drive, so you have to specify how much hard drive space is allocated to each. That’s what partitioning is. Chromebooks run Linux as a developer tool, because they benefit from people learning to develop on their platform, they try to make it as easy to manage as possible. But I don’t think the nerds on the Internet have worked that out, so if you Google questions about Linux, you’ll inevitably find exceedingly complicated instructions involving command lines and architecture builds, when you probably just need to change a setting.

I have printed on fabric ironed to freezer paper. It turned out very well.

nice to hear that it work out.