I was hemming and hawing over what to get for my boss for Boss’ Day. I like to refer to him as the POB - an acronym for him since he’s the President of Bouma (the company I work for). I was talking to a coworker who mentioned that it was sad that there wasn’t enough time to get something custom made with POB on it and I said, “Oh, I don’t order custom, I make custom!” Thus the idea of a World’s Best POB trophy ribbon was invented. I started out making it out of fabric, but figured he would probably like something in a frame better. I decided to go through all of my textured gelli prints and make a little collage of sorts for him. Besides gelli prints, I used some sticker paper for the words and gel pens. The company I work for is a construction company, so the thing in the middle is a very roughly drawn hard hat. I haven’t been in the office since Boss’ Day to give it to him, but plan on giving it to him tomorrow. 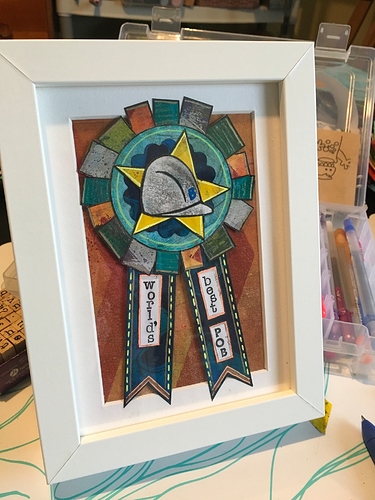 What a great idea! I’m impressed that even without a monster, this is so clearly done by you. You definitely have a very recognizable style! I love it!

Well done, hope he loves it!

I love that you made it whimsical and yet masculine all at the same time. I’m sure he is going to love it!

Very clever and professional gift and yet artsy and personal!

So wonderful!! Love the paper version!

PS…POB is one letter off from SOB, which is where my brain keeps going! Whoops.

Oh, I specified in the card I wrote to him that I hoped he’d like it and if he didn’t, he just shouldn’t tell me. And then I put that if he did tell me, he’d get a new acronym that rhymed! ha!

HA! That is so great! What fun!